From the New York Times for Kids

INDIANAPOLIS -- Here's another cool thing we can celebrate about the Circle City. The Children's Museum of Indianapolis has been named one of the 10 coolest museums in the world by the New York Times for Kids.

The newspaper says, in a world of sometimes boring museums where you have to behave like an adult, there are many where you can touch, play and explore.

Coming in fourth on the list, The Children's Museum of Indianapolis gets kudos for having plenty to entertain your kids.

The Times also highlights the Dinosphere, which has dinosaur skeletons and a place where children can actually dig.

Who thinks we’re one of the 10 Coolest Museums in the World?! — the @nytimes, that’s who!

Find us in today’s Kids Section of the Sunday Times! 📰 pic.twitter.com/E20ADOhcgg

But just because our children's museum is on coolest list doesn't mean all the museums that made the cut are for kids.  Many of the others are actually intended for adults. Here is the full list:

4. The Children's Museum of Indianapolis

5. The Horniman Museum and Gardens, London 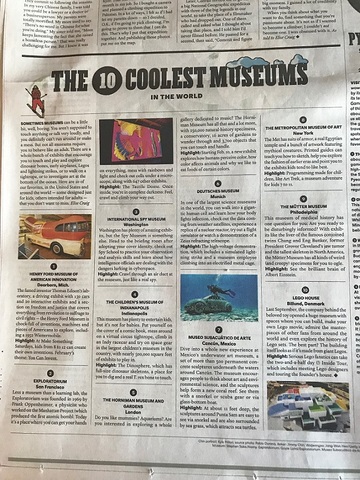