Who are The American Guard: Patriotic nationalists, or skinheads in disguise? 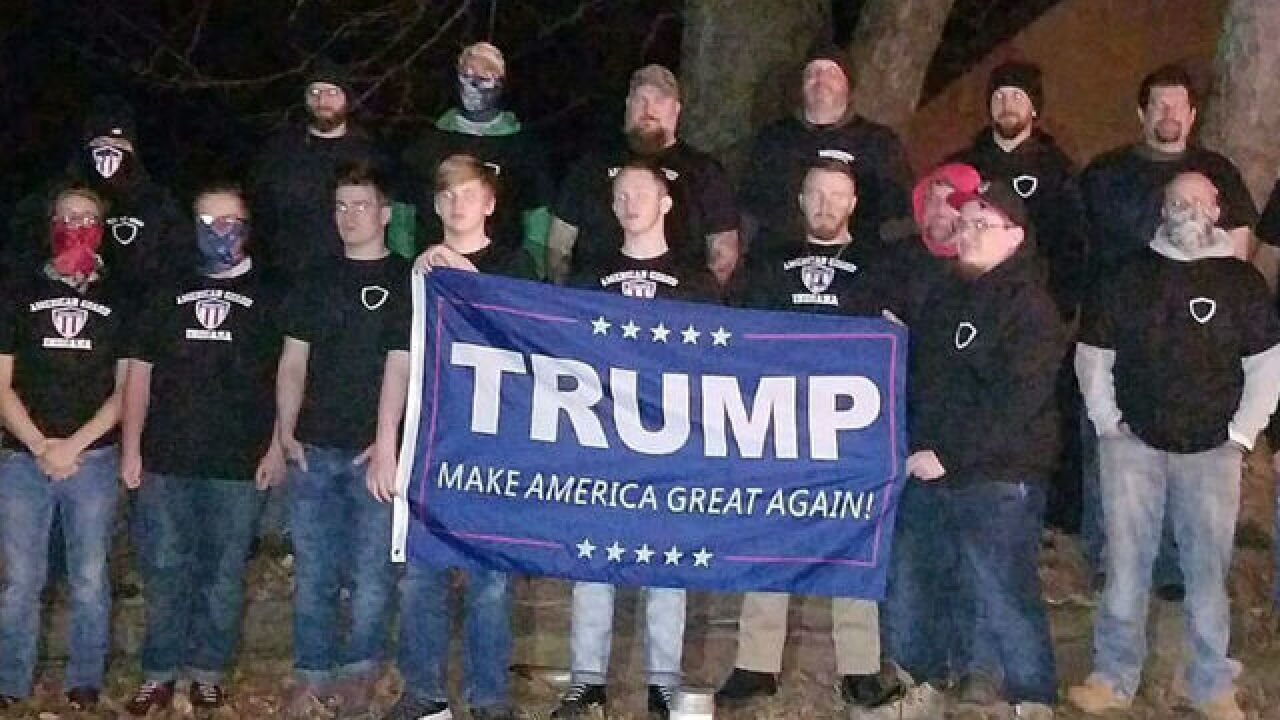 INDIANAPOLIS -- The American Guard says its members are patriots and constitutional nationalists standing up for their communities. Its critics say it's simply a group of white supremacists in disguise.

The group began using the name American Guard late last year, and officially became a national entity in February, when it began appearing at rallies in support of President Donald Trump to offer "protection" from perceived threats of left-wing violence.

Members of the American Guard have taken part in rallies and marches across the country, including a May 4 rally in opposition to the removal of Confederate monuments in Louisiana. According to the group's Facebook page, it plans to attend a "March Against Sharia" in Indianapolis in June.

We want to inspire the right-wing working class to direct action and remind people that there is a pathway to greater freedom and self-determination in the Constitution and the Bill of Rights. We also intend to organize and stand as protective force for those on the right whose attempts at free speech have been met with Marxist violence in recent years. – Brien James, American Guard founder

Before it was the American Guard, though, the organization was the Indiana chapter of the Soldiers of Odin – an anti-immigrant group first founded in Finland that conducts street patrols, ostensibly, in the name of community protection.

The Anti-Defamation League, which tracks extremist groups as part of its battle against anti-Semitism, says the Soldiers of Odin is a collection of "open white supremacists, as well as other right-wing extremists" united by their "shared hostility toward immigrants and especially Muslims."

At the helm of the Soldiers of Odin Indiana chapter – now the American Guard – is Brien James. For decades, James was, in his own words, a "well-known and respected" member of the white nationalist movement. He was also a founder of the Vinlanders Social Club, which formed in 2003 from former members of a skinhead group called the Outlaw Hammerskins.

The Southern Poverty Law Center's extremist profile on James says that, "even in the violent world of the racist skinhead subculture, Brien James … stood out, albeit for all the wrong reasons."

The SPLC and the ADL also categorize James' Vinlanders as an extremist group. Carla Hill, an investigative researcher at the ADL's Center on Extremism, says the Vinlanders are "very hardcore white supremacists" tied to at least nine murders around the country. One of the group's co-founders, Eric "The Butcher" Fairburn, is currently serving a life sentence for the murder of a man in Springfield, Missouri.

READ MORE | These are the hate groups operating in Indiana

Hill says she sees the American Guard as an attempt by white supremacists to soften their language to become more appealing.

"What we're seeing is part of a conscious effort of white supremacists to tone down their rhetoric to edge closer to the alt-right," Hill said. "They're trying to tone down their rhetoric to normalize hatred, bigotry and violence. They bank on classic fears like Islamophobia, misogyny and these kinds of topics – even immigration – to normalize this kind of fear and make it OK to agree with them."

The American Guard's emblem – seen on the shields members carry at rallies and during street patrols – certainly makes no bones about appealing to those with anti-immigrant sentiments. The shield features red, white and blue bars, crossed butcher's cleavers and a cannon emblazoned with the words "come and take it." James designed it himself in homage to one of his heroes: William "Bill the Butcher" Poole.

Poole (played by Daniel Day-Lewis in the film "Gangs of New York") was the founder of the Bowery Boys street gang. The Bowery Boys were a nativist gang connected to scores of incidents of anti-immigrant violence in New York City in the mid-19th century. In one incident alone – the Dead Rabbits riot – the Bowery Boys and rivals the Dead Rabbits escalated a feud into citywide gang violence that left eight people dead and as many as 100 injured.

"Bill the Butcher as portrayed in the movie Gangs of New York is one of my all-time favorite characters," James said. "We already had a political action group based on these same principles called the Sons and Daughters of Liberty (SDL). The decision to create a patch-wearing, direct action division of the SDL led me back to thinking of the nativist gangs of that era when I was looking for inspiration."

Nevertheless, James says he has moved ideologically from white nationalism to what he calls "American constitutional nationalism" – something akin to extreme libertarianism, based on a description of the movement James posted online.

"Race just doesn't cut it as a dividing line," James said. "Individuals of other races can agree with you and believe in what you believe. They can champion your causes and earn your respect. People of your own race can embody everything you despise. People can argue over percentages but that wasn't enough for me. I don't want to be caught thinking and acting on absolutes that aren't absolute."

As far as the American Guard's stance on the issue?

"We are pro-American," James said. "We don't support or tolerate National Socialism [Nazism] any more than any other type of socialism. We support constitutional law enforcement and government. These differences in philosophy may mean very little to anyone on the left who is reading everything I say and looking between the lines for only what they want to see, but they mean a world of difference for those people who are still in the white nationalist mindset."

It's not entirely clear that's true. The American Guard's members seem to have no problem maintaining membership in both the avowedly white supremacist Vinlanders and the ostensibly ethnically-inclusive American Guard. And the American Guard's Facebook page appears to have a strong predilection for posting news articles that portray racial minorities, immigrants and, particularly, Muslims, in a negative light. James says the articles are primarily about "Marxists" and "social justice warriors" – the favorite bogeymen of the far-right, where James says the American Guard has drawn heavily for recruits.

"We took a lot of our members from the far-right," he said. "They see American constitutional nationalism as a more practical and productive alternative than the ethnic nationalism they were previously engaged in. We have militia and 3-percenter types coming to us because their movement lacks clearly defined political goals and platforms. We have members of ethnic minorities who had strong nationalist views and could not find a place to fit in before this type of group came into being. We are a home for a lot of different types of patriots."

Hill says she doesn't know if James' apparent change of heart is sincere – but she doesn't believe the many Vinlanders who have joined the American Guard have abandoned their white supremacist views.

"He has made that a public announcement [that he's left white supremacy], and that's good," Hill said. "But the problem is that the people in his group support him because of his past. I've identified a number of people in his group that are white supremacist skinheads, and I don't believe for a second that they've changed. It's the same people under a different name."

According to James, the America Guard has seen "phenomenal growth" since its founding late last year. He claims the group now operates in 17 states and is "growing every day." The American Guard's website claims it has chapters so far in Arizona, Florida, Kentucky, Illinois, Indiana, Minnesota, Missouri, New Hampshire, North Carolina, Ohio, Tennessee and Texas.

Hill said that, like the National Socialist (Nazi) movement – which has removed the swastika from its flag and now marches under a rune – the American Guard wants to "make the gray areas smaller."

"I think they feel like their voice has a place, and if they normalize their voice, people will listen," she said. "That's particularly the case with the American Guard, who has tried to tone down the rhetoric. They're masquerading as libertarians. They want to be viewed as the regular right. But behind them are racist skinheads."

ALSO READ | The History of Hate in Indiana: How the Ku Klux Klan took over Indiana's halls of power

Jordan Fischer is the Senior Digital Reporter for RTV6. He writes about crime & the underlying issues that cause it. Follow his reporting on Twitter at @Jordan_RTV6 or on Facebook.