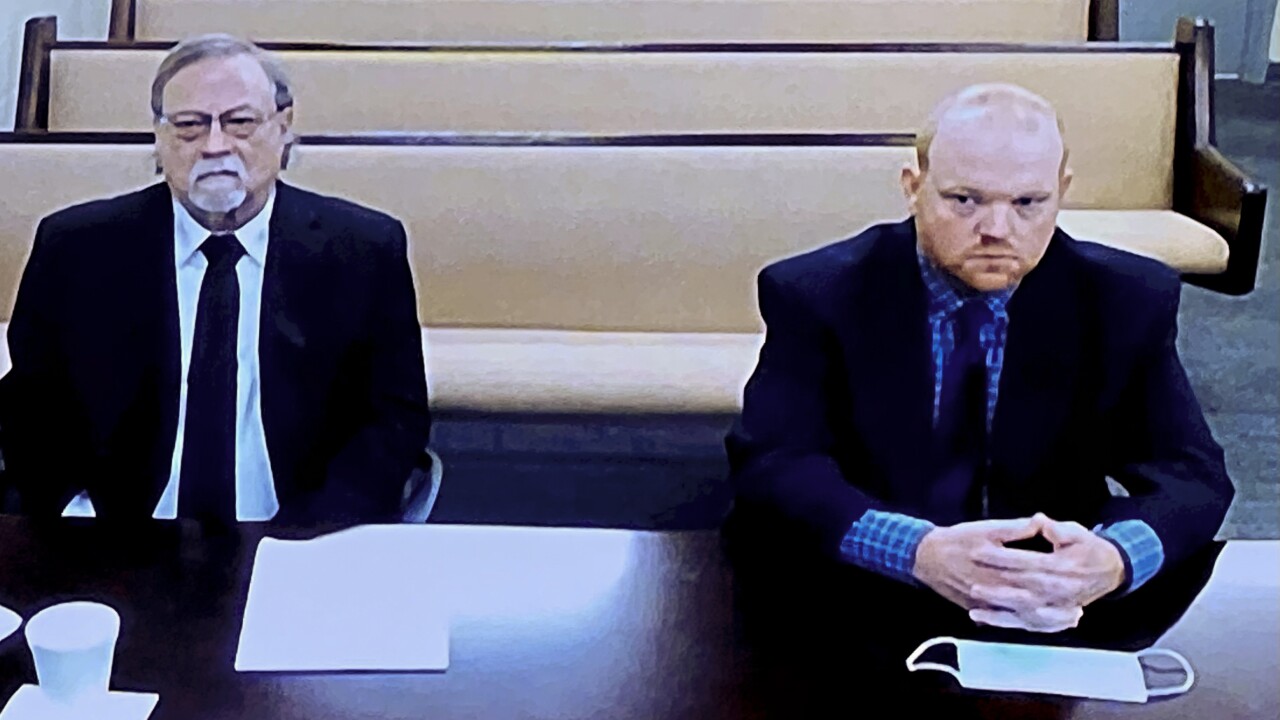 Copyright 2020 The Associated Press. All rights reserved
Lewis Levine/AP
In this image made from video, from left, father and son, Gregory and Travis McMichael, accused in the shooting death of Ahmaud Arbery in Georgia on Feb. 2020, listen via closed circuit tv in the Glynn County Detention center in Brunswick, Ga., on Thursday, Nov. 12, as lawyers argue for bond to be set at the Glynn County courthouse. The McMichaels chased and fatally shot Ahmaud Arbery, a 25-year-old Black man, after they spotted him running in their neighborhood just outside the port city of Brunswick.(AP Photo/Lewis Levine)

BRUNSWICK, Ga. (AP) — A Georgia judge has denied bond for the white father and son charged with murder in the February slaying of Ahmaud Arbery.

Superior Court Judge Timothy Walmsley said Friday that he's concerned Gregory McMichael and his adult son, Travis McMichael, took the law into their own hands and endangered neighbors when they pursued the 25-year-old Black man with guns and shot him in a residential street in February.

Defense attorneys say the McMichaels had reason to suspect Arbery was a burglar and Travis McMichael was defending himself when he shot Arbery in the port city of Brunswick.

During a hearing Thursday, prosecutors said Travis McMichael had previously used racial slurs in text messages and on social media.

Prosecutors asked the suspect’s friend, Zachary Langford, on the witness stand about a text in which McMichael used a slur for Black people. At first, he said he didn’t recall receiving the message, but after reviewing a transcript of the exchange, he said “He was referring to a raccoon, I believe,” The Associated Press reports.

Attorneys for the McMichaels have died any racist motives in the shooting.

The McMichaels were not arrested until May, when the Georgia Bureau of Investigation stepped and charged them with murder and aggravated assault.

There was mounting public pressure for justice in the case after video was released of the deadly incident. The case gained attention nationwide during the summer’s protests over racial injustice.

The man who filmed the video, William Bryan, was also later arrested and charged with murder and criminal attempt to commit false imprisonment, according to The New York Times.

In June, The Times says a grand jury returned an indictment with nine counts against all three men. Those charges include malice murder, four counts of felony murder, two counts of aggravated assault, false imprisonment and criminal attempt to commit false imprisonment.