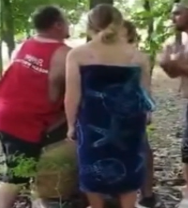 Attorneys for two people involved in an incident at Lake Monroe say what happened there recently wasn't what it appeared to be.

MONROE COUNTY — Attorneys for the man accused of racially motivated threats that were caught on video near Lake Monroe say the accusations against his client are false.

In a press conference on Monday, July 13, the attorneys claim Booker was the "instigator and agitator" in the incident, and that he "created a false narrative that he is perpetuating with the media."

According to Purdy's attorneys, Purdy and Caroline McCord, the woman shown in the same video, were both given a polygraph test regarding the incident. The attorneys claim both Purdy and McCord "passed" their tests. They are now calling on Booker to take a polygraph test as well.

"We challenge Mr. Booker to take a polygraph, we'll pay for it, so he doesn't have to use any of his GoFundMe," the lawyer said during the press conference Monday.

"Mr. Booker needs to tell the truth about punching people and apologize to the people he has harmed and to all real victims of racism because he has diminished them. Also, those who were there with Mr. Booker and know the truth should also come out and tell the truth," the attorneys said in a press release issued Monday afternoon. "Mr. Booker was the instigator and agitator. There was no problem until Mr. Booker returned for no legitimate reason. He was the aggressor and became threatening. Mr. Booker was the first to throw punches. Mr. Booker was then restrained. Not beaten. Restrained. For his own safety and the safety of others. He then started race-baiting. Then stuck around after his alleged 'near lynching' to video his 'attackers.'"

Vauhxx Booker is a victim of an attempted lynching and violent prejudice fueled attack.

We listened as you did to the press conference which was held by the attorney’s for Caroline McCord and Sean Purdy and the other people in the group who on July 4th, Independence Day pinned Vauhxx Booker against a tree and shouted vile racist epithets at him.

Sean Purdy and Caroline McCord did not speak to the press. Why not? They did not apologize for the way they treated Vauhxx Booker as can be seen on the video tape.

Mr. Booker did not instigate this encounter; he did not provoke anyone to hold him against his will. He did not yell or shout or lose his temper. He doesn’t need to take a polygraph test. Look at the video. There are witnesses who saw Sean Purdy’s aggression and who heard the racist slurs of his friends. You cannot provoke racism.

It’s Vauhxx Booker who called 911 after he was attacked.

This is what repeatedly happens…. the victim gets blamed and shamed. He gets re-victimized. Vauhxx Booker is the victim. Black people across the nation have been the victims.

This afternoon while attorney’s for the suspects in the attack on Mr. Booker were meeting with the press, Vauhxx Booker was meeting with the FBI who have officially opened a hate crime investigation.

On one thing we agree. It is time for arrests. It is time for the Monroe County Prosecutor to file charges against the offenders who threatened to lynch Mr. Booker. It is time these offenders, who pulled out pieces of Vauhxx Booker’s hair and who gave him a concussion, are held accountable by the law.

You can watch the fall press conference with the attorneys for Sean Purdy below.