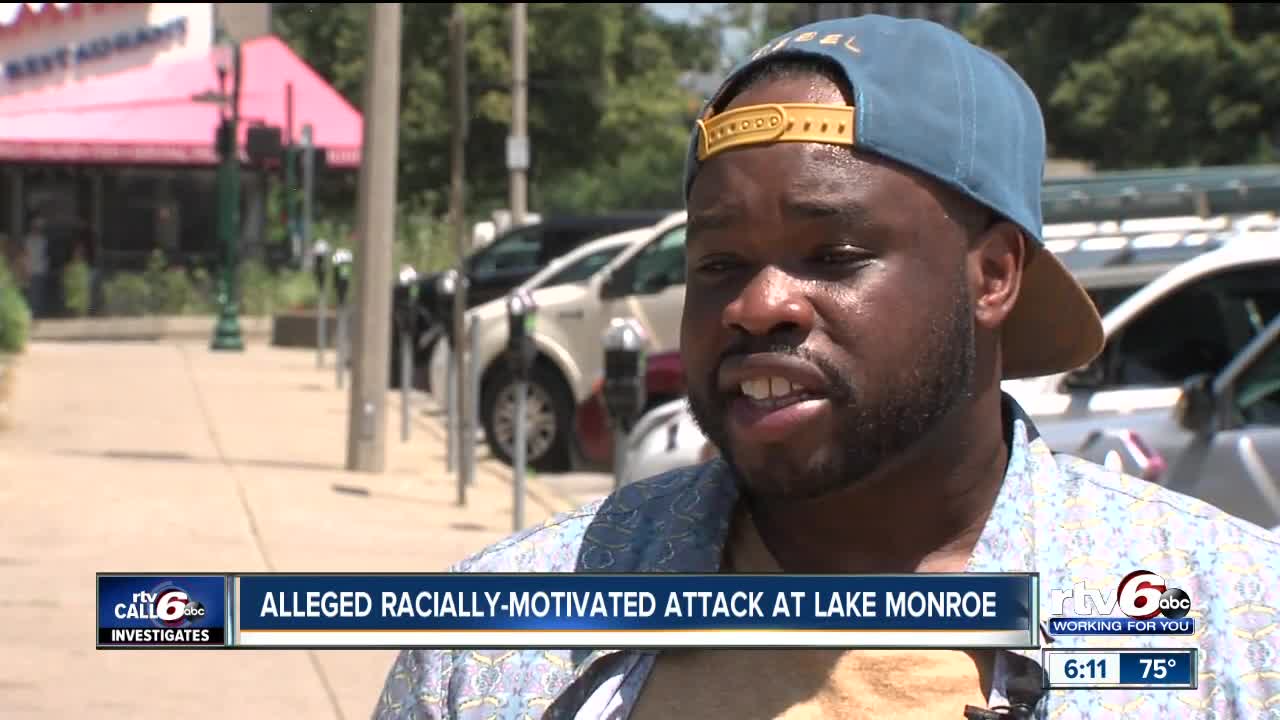 BLOOMINGTON — A man said he was almost lynched over the July 4 weekend at Lake Monroe in Bloomington. He said a group of people physically assaulted him and threatened him using racially-charged language.

The mayor of Bloomington has condemned what he saw in a series of videos that has now gone viral, being shared thousands of times. The video shows several men holding a black man against a tree, with his arms behind his back, allegedly threatening to lynch him.

"To be pinned down at the tree and hear him yell at his friend, 'Get a noose,' not even a rope, to get a noose with so much intent and the connotation that that carries in our society, I knew my life was in danger," Vauhxx Booker said.

In disbelief is how Booker said he felt when men were seen holding him against his will — shouting 'white power' and other racial slurs.

"There was a moment where a white woman that was standing by yelled out not to kill me and as I was underneath these men struggling to breathe I realized that she was talking about me, not to kill me," Booker said.

Booker said he and some friends went to watch the lunar eclipse on the 4th of July at Lake Monroe. A group of men informed them the route they were taking to get to the public access beach was on private property but then things got hostile, leaving Booker with a minor concussion, abrasions and patches of hair ripped out.

What saved his life, Booker said, was his friends along with bystanders that heard the commotion and demanded the attackers let him go, refusing to leave.

"They stayed. It made a difference," Booker said. "I wasn't going to be a Black person that died and heard my own death narrated in front of me."

"My heart is breaking for our town," Nicole Bolden, Bloomington city clerk, said. "This is Bloomington. And I know people love to say this doesn't happen in Bloomington. It does. A lot."

Booker called the police and the Indiana Department of Natural Resources came but no arrests were made at the scene.

"It is not ironic that this would happen the weekend of Independence Day," Yoder said. "We have to do the work in order for all people to truly be free."

The Indiana Department of Natural Resources on Monday evening released the following statement:

The Indiana Department of Natural Resources, Law Enforcement Division responded to a call for service regarding a battery on July 4, 2020 at approximately 8 p.m. on private property adjacent to Monroe Reservoir property.

DNR is investigating after a 911 call was transferred to Indiana Conservation Officer Central Dispatch. Additional investigation and interviews are underway.

The Indiana Department of Natural Resources, Law Enforcement Division is working diligently with the Monroe County Prosecutor’s Office to ensure a lawful resolution. This matter remains under investigation and no further information will be released at this time.