BROWN COUNTY, Ind. --  A customer at a Brown County hotel said she was charged $350 and threatened with legal action after leaving a negative review about her experience.

The case has captured the attention of the Indiana Attorney General’s office who filed a lawsuit December 15 alleging the hotel violated Indiana Deceptive Consumer Sales Act.

Katrina Arthur and her husband, who live in Greene County, stayed at the Abbey Inn & Suites in Brown County in March 2016.

“We were just wanting to get away and have some alone time,” said Arthur. “It looked really pretty on the website.”

But Arthur said the problems started as soon as they arrived.

“It was a nightmare,” said Arthur. “The room was unkempt, and it looked like it hadn’t been cleaned since the last people stayed there. We checked the sheets and I found hairs and dirt.”

Arthur said the room also smelled like sewage, the water pressure was lacking and the air conditioner didn’t work.

“We didn’t see anybody we could talk with, so I decided to call the number that goes to the front desk and it automatically went to a lawyer’s or something weird like that,” said Arthur. “I actually had to clean the room myself.” 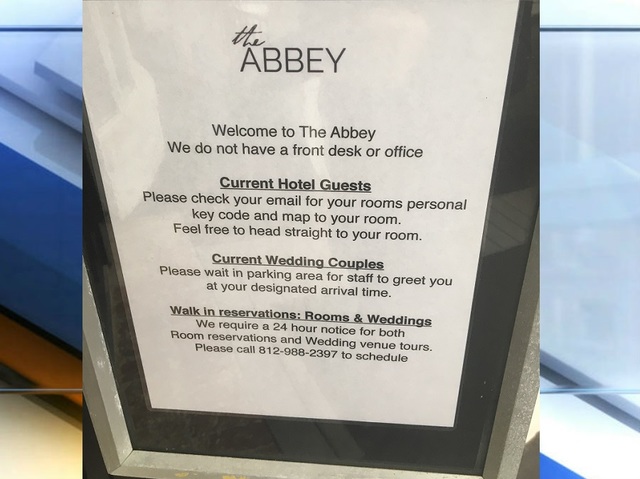 Arthur later received an email from the hotel asking for an online review, and Arthur didn’t hold back.

“I was honest,” said Arthur. “I wanted people to know not to waste their money because I know people save their money for special occasions."

After posting the review, Arthur said the hotel charged her $350 and she received a letter from the hotel’s attorney threatening legal action.

“That scared me to death,” said Arthur, who then deleted the review.

After finding similar complaints about Abbey Inn, Arthur filed a complaint with the Indiana Attorney General in an attempt to get her $350 back.

“I feel like they were punishing me for being truthful and I don't think that's fair,” said Arthur. “I was very angry they had done that.”

The Indiana Attorney General’s office filed a lawsuit on December 15 against Abbey Management, which owned and operated Abbey Inn when Arthur visited.

Between September 2015 and November 2016, Abbey Inn had a policy in place that allowed them to charge customers $350 for negative reviews, according to the lawsuit.

The state alleges the hotel violated Indiana’s Deceptive Consumer Sales Act by enforcing a customer review policy that is “unfair, abusive, and deceptive.”

“Guests agree that if guests find any problems with our accommodations, and fail to provide us the opportunity to address those problems while the guest is with us, and/or refuses our exclusive remedy, but then disparages us in any public manner, we will be entitled to charge their credit card an additional $350 damage,” the policy read, according to the lawsuit. “Should the guest refuse to retract any such public statements legal action may be pursued.”

The policy was posted on the website Abbey-Inn.com, located on page two of a seven page document, the lawsuit alleged.

The hotel did not provide guests with a copy of the policy, nor was it posted in individual rooms or common areas, according to the Attorney General.

“I never got any paperwork,” said Arthur.

The email requesting customers leave an online review did not warn consumers of significant consequences for posting a disparaging or negative review, the lawsuit said.

The lawsuit alleged Abbey Inn & Suites often did not have employees on-site and available to resolve consumer issues, and that a sign stated if a consumers called the overnight phone number and there was not an emergency, the hotel would charge the consumer $100.

Online reviews are an important factor for consumers when deciding where to spend their money, and the lawsuit alleges Abbey Management used the reviews as a sales tool.

An emailed response said they had passed on RTV6’s inquiry to management.

When Call 6 Investigates stopped by Monday, we could not find any staff to talk to and signs indicated the hotel does not have a front office.

A number listed for him was disconnected, and an email to Szakaly bounced back.

Call 6 Investigates received a phone call from a woman named Amanda who said she and her husband have been in the process of buying the 40-year-old Abbey Inn since January 2017.

Amanda said she was unaware of the lawsuit, but said they are working to improve the hotel.

Amanda said she was working to get in touch with Szakaly who still owns some of the property until the transfer goes through.

Amanda told Call 6 Investigates she would provide a statement via email, but RTV6 has yet to receive a statement.

As for Katrina Arthur, she wants her $350 back and hopes the state’s lawsuit sends a message to consumers who post online reviews.

“There’s nothing wrong with being truthful,” said Arthur.

The Indiana Attorney General’s office said consumers should not be afraid to speak the truth about businesses, and provided the following tips:

Call 6 Investigates also spoke with several national experts who have been outspoken about how Google fails to weed out phony reviews.

“It is illegal, unethical for businesses to charge consumers or threaten legal action,” said Brown. “Currently only Yelp warns consumers of this this practice.  Consumers should continue to write truthful reviews.”

“Reviews have long been an area where free speech has been protected and promoted,” said Blumenthal. “The ability for a consumer to say what they want about a business via an online review is largely protected at both the state and federal level. This question has long been settled and it is amazing to me that any business in this day and age would think that they could constrain a consumer in such a way.”