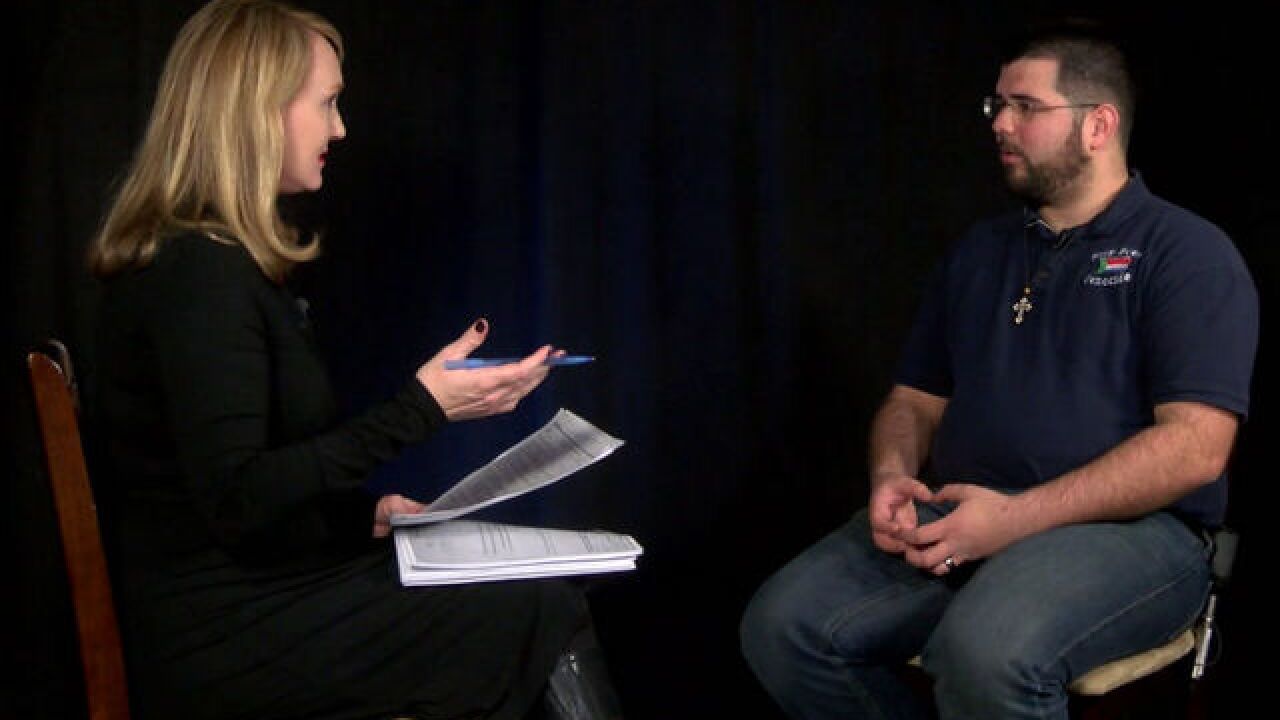 INDIANAPOLIS -- Matthew Warren Heimbach has been called a white supremacist, a racist, a neo-Nazi and the future of organized hate in America.

The Indiana Department of Child Services hired Heimbach to be a family case manager in Dubois County, which is close to Paoli, where he lives with his wife and infant son.

He started with DCS as a family case manager trainee on January 11, 2016.

The nationally known pro-white activist was one of 950 family case managers hired by DCS in the last year, records show.

The state agency has battled turnover and overwhelming caseloads for some workers.

Heimbach, 24, has appeared on national news, including Nightline, for his views on white separatism.

DCS terminated Heimbach on January 28, less than three weeks after his hire date.

Call 6 Investigates Kara Kenney sat down with Heimbach, who says he was wrongfully fired by the state agency.

“I want to be a DCS worker because I see communities in need,” said Heimbach. “I care about all kids.  I see a lot of families that need assistance, that need advocates, who are being left behind.”

Heimbach spent several weeks in classroom training and had access to children and families, alongside a mentor and other caseworkers.

"I was able to administer drug tests to one family, and to run several different interviews with families and do visits," said Heimbach.  “I was able to get my hands dirty.”

The Paoli resident calls himself a white nationalist and a pro-white community activist, and someone who advocates for the interests of white people.

Heimbach denies being racist, if you define racist as someone that hates races other than their own.

“I’ve never been a hate filled person,” said Heimbach. “I have no animosity toward any other group, but (racist) is this title thrown out for any white person who thinks we should be able to stand up for ourselves.”

Heimbach believes it was his political beliefs that triggered his firing at DCS.

“I had done all of my training activities appropriately,” said Heimbach.

Heimbach said his coworkers had learned of his political beliefs and told him they were going to report him to DCS supervisors.

A day later, he was escorted out of classroom training on January 28, Heimbach said.

“Before I was even able to say anything, I was handed a piece of paper that said ‘you’re fired,'” said Heimbach, who added he was not given any further explanation for his termination.

Heimbach said he does not think his political beliefs would result in any bias toward certain families or children.

“I’m a humanitarian at the end of the day,” said Heimbach. “One of my coworkers was talking about being involved in the Black Lives Matter movement. There is obviously a double standard.”

Heimbach said he ruffled some feathers during DCS training when he questioned why DCS case workers are not expected to report illegal immigrants.

“I was told we’re not supposed to report it, we aren’t supposed to contacted ICE or immigration control or police, and that’s a lot of concern to me,” said Heimbach. “Under federal law if you knowingly conceal someone as being an illegal immigrant, that’s a federal felony. DCS is more interested in protecting people who aren’t supposed to be here in the first place than enforcing the rule of law.”

DCS does not have a policy or statute requiring workers to report illegal immigrants, according to Ashley Hungate, spokesperson for the Indiana State Personnel Department.

The State Personnel Department does not require Google searches before hiring state employees.

Call 6 Investigates googled Heimbach’s name and easily found how controversial his views are.

Heimbach said he used his legal name on his resume, and didn’t try to hide his identity.

“I did not hand them a ‘hey, here’s all the things I’ve said and done throughout my life’ but at the same time I was upfront with them,” said Heimbach. “I passed my criminal background check, I passed my drug test, my college transcripts passed with all the qualifications for DCS, and by all objective standards I was qualified for the job.”

Hungate provided Call 6 Investigates with a list of checks included when hiring a DCS case worker.

State Personnel and DCS both declined requests to go on camera about Heimbach and hiring procedures.

Hungate said DCS provides a 12 week training period for family case manager trainees where DCS determines if an employee is a “good fit.”

Heimbach did not pass his probationary period, according to Hungate.

“Heimbach was not dismissed for political/religious opinions or affiliations,” said Hungate.  “He was dismissed for his behavior at work.  His behavior in training was disruptive of the workplace, incompatible with public service, and not protected speech. For example, what I’ve been told is that, while in training, his response to a question suggested violence against a client.”

Heimbach denies being violent and said no one from DCS ever talked with him about being disruptive.

Call 6 Investigates followed Heimbach as he returned his equipment to DCS, but he says his connection to the agency is far from over.

He plans to appeal his firing, pointing to a DCS policy that states employees can’t be demoted or dismissed because of their political beliefs or affiliations.

“I could be a good family case manager,” said Heimbach. “I think I could bring a lot to the department and help a lot of people.”

Dubois County is part of Region 17, which is not currently meeting standards aimed at keeping caseloads manageable for case workers.

Heimbach has also contacted the ACLU, and said his case could have implications for anyone with political views, especially in the age of social media.

“This is really a civil rights slippery slope we're seeing,” said Heimbach. “You're saying because of my political beliefs I can't properly serve the children of my community, then how are you going to handle it if we have an atheist case manager who is dealing with traditional Christian families?"

“My personal, political views had nothing to do with the job,” said Heimbach.