KOKOMO, Ind. -- Chuck Sanders was a stock car enthusiast. But his passion for racing ended when he turned to drugs to reduce the pain.

Racing injuries led Sanders, 41, to have four spinal fusions. He was prescribed painkillers during his recovery.

"I was actually a pretty good driver until I had all these neck injuries," Sanders said. "I got hooked on it."

Howard County reported 44 fatal overdoses in 2017. Sanders says one of them happened in his home.

"Levi overdosed and died here last year," Sanders said. "I sat and did CPR on Levi for 30 minutes while waiting for the paramedics to show up."

Three other people, Sanders says, have also overdosed at the house in the past several years. Fortunately, all the rest survived. 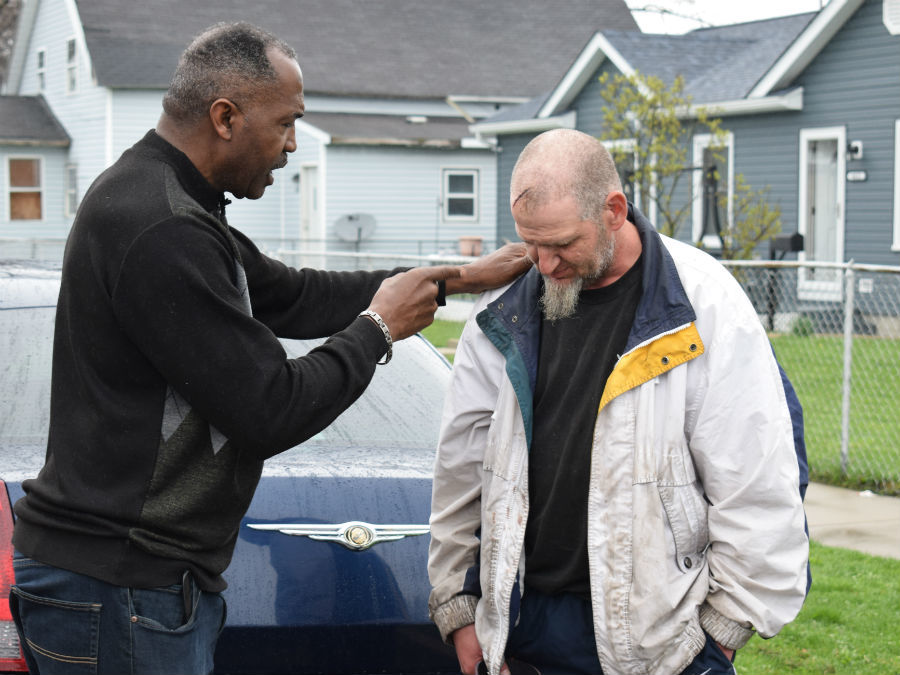 Above: Kokomo community activist Dennis Sanders (left) encourages Chuck Sanders (right) to continue fighting his addictions. Below: Dennis Sanders shows off his tattoos, which read "Life is Crazy" and "God is the Answer." (Photos by Jordan Fischer) 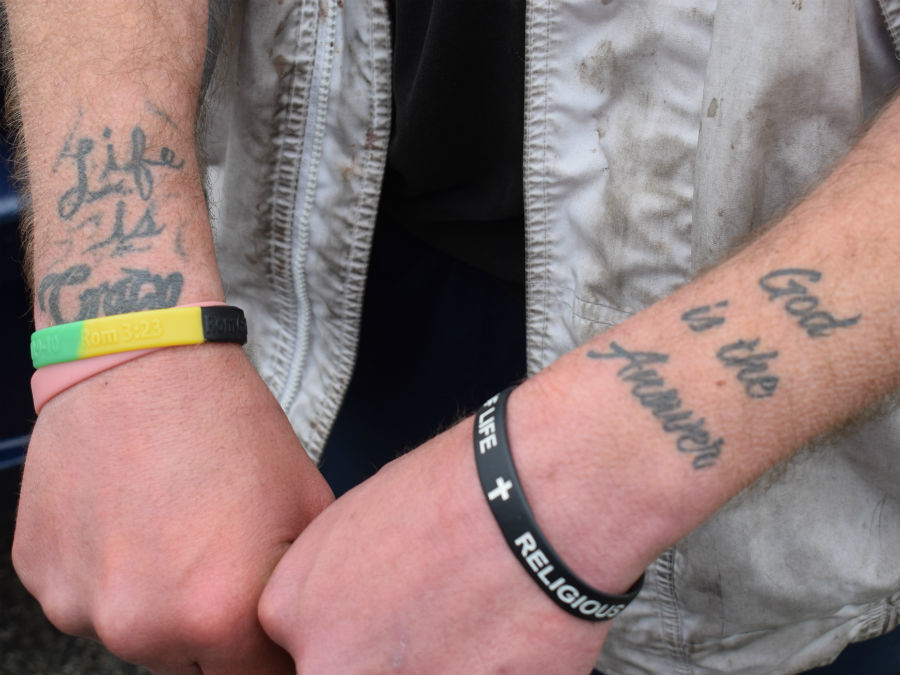 Stories like Sanders' aren't unique to Kokomo. Statewide, opioids are taking their toll in Hoosier lives.

Our Call 6 Investigates team took a deep dive into the opioid prescriptions dispensed, with eye-opening information as to which places are struggling and pushing back on the problem.

Dennis Sanders (no relation to Chuck) makes it a point to visit those struggling or recovering from cocaine, heroin or painkillers in Kokomo. Chuck Sanders' house has been one of his regular stops for years.

"If I can just save one, with the good Lord's help it's worth it all," Sanders said.

People know Sanders, and he knows their demons -- because he had his own. Now 57, Sanders says for years he had a $50-a-day cocaine habit. A decade ago, he made the decision to get off the drugs. He points to his faith as the catalyst.

"I believe in the Big Man, you know, and that's the way we live," Sanders said.

Sanders can see his church, Grace Memorial Church of God in Christ, from his front porch. He lives just a block from his pastor, Rev. Milton Hall Jr. Hall said he's seen Sanders "change his whole life" in the time he's known him.

While RTV6 was shadowing Sanders, he ran into a man he knows, Kevin Catron, 50, who'd just been released from jail hours earlier. Catron said a roofing accident introduced him to painkillers.

"I went in a downward spiral, but I'm pulling myself out of it," Catron said. "There for a while, I thought there was no getting out. I've seen how they've got strung out and would do anything to get it, rob, steal, just whatever. It's tough." 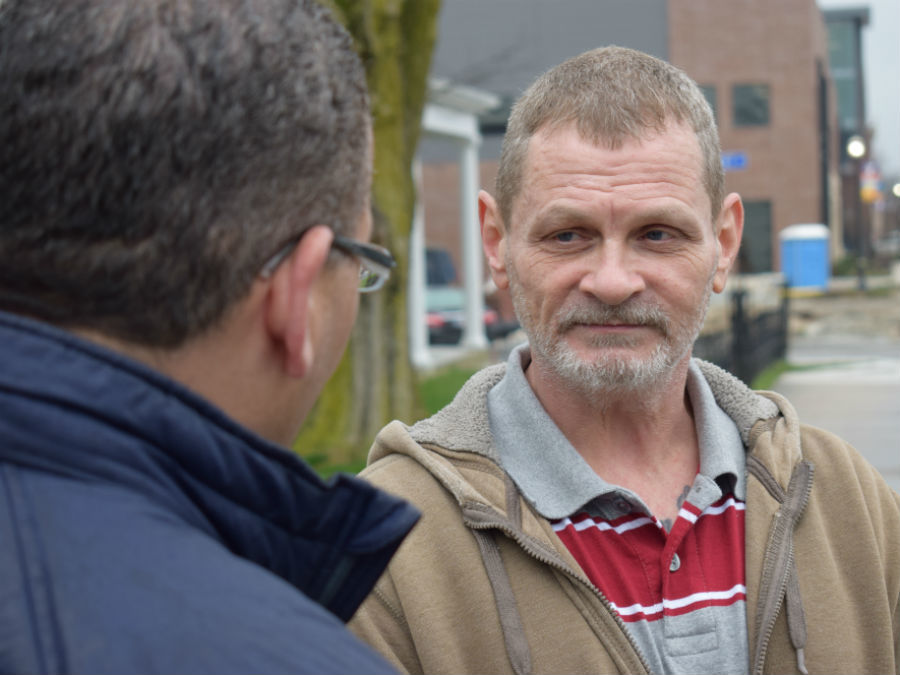 Above: Call 6 Chief Investigator Rafael Sanchez talks to Kevin Catron about his struggle with addiction and recent release from jail.

In light of the opioid epidemic, Call 6 Investigates went through all the prescriptions for opioid painkillers dispensed in the state. 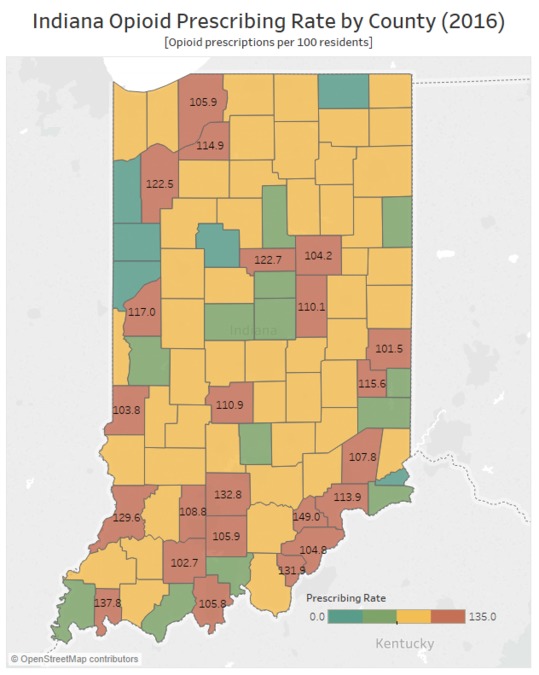 Click here for an interactive version of this map.

Places like Kokomo, which saw its deadliest year for overdoses in 2017, are making inroads with a community-wide attack on the problem. Howard County was among six counties that saw a 50-percent decrease in the strength of opioids prescribed. That decrease may help cut addiction levels.

On the flip side, 14 counties, including Spencer County, saw an increase.

The state's drug czar is working on policies to address the crisis and says different variables impact the prescription levels.

"It's something we are concerned about," said Jim McClelland, the executive director of drug prevention in Indiana.  "The overuse of legally prescribed pain meds is how all this got started. This goes back 20 years. We're improving at a faster rate than the national average. However, we started at a higher rate."

On the streets of Kokomo, Sanders has been connecting people with resources and a way to escape what's holding them back.

"It's going to take people really coming together as a family and realizing these problems is coming to all of us," Sanders says.