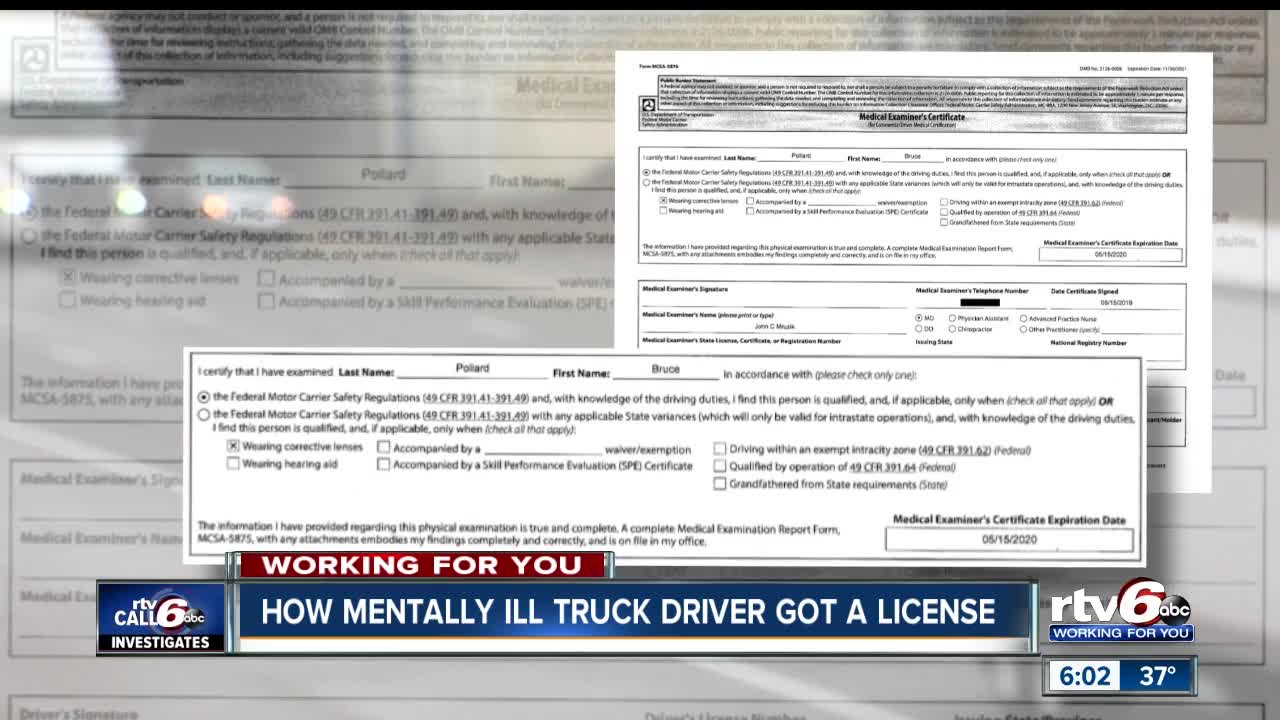 A mentally ill semi-truck driver was cleared to drive by a state certified medical examiner just months before causing a crash that killed an Indianapolis mother and her twin daughters, Call 6 Investigates has learned

INDIANAPOLIS — A mentally ill semi-truck driver was cleared to drive by a state certified medical examiner just months before causing a crash that killed an Indianapolis mother and her twin daughters, Call 6 Investigates has learned.

Bruce Pollard pleaded guilty but mentally ill on February 7 to criminal charges related to the July 14 crash that killed Alanna Koons and her two children, Ruby and June.

Pollard, a driver with Weston Transportation out of Missouri, showed no remorse after the crash and told officers he was “on a lot of medicine” for his anxiety. His own attorney, Jack Crawford of Indianapolis, questioned why Pollard was operating a semi-truck in the first place.

"He clearly should not have been driving a 60,000-pound heavy truck on the interstate highways in July of 2019,” Crawford said. “He shouldn't have been driving. That's another question in this case. How did he obtain a CDL license?"

Call 6 Investigates is getting answers to the question of — how did Pollard get a valid CDL and get hired despite a history of serious mental illness?

“Five minutes with Mr. Pollard would convince anyone he has a mental illness,” Crawford said.

Crawford submitted a summary of more than 600 pages of medical records to the Marion County court showing Pollard was treated for a variety of psychiatric illnesses in 2015 and 2016 including schizophrenia and bipolar disorder.

Further evaluation revealed Pollard had lesions on his brain and was taken to the emergency room four times for confusion and agitation that could not be controlled, records show.

“I’m not really quite sure if the patient can drive but would leave it up to the occupational therapist’s assessment,” read one medical record from 2015.

Pollard passed state medical exams in both February 2019 and again in May 2019, just months before the crash that killed Koontz and her daughters.

Typically semi-truck drivers are expected to take a state certified medical exam every two years, however, the doctor can request the driver return for another exam if they are concerned about something with the driver’s health.

Pollard’s attorney said Pollard was able to use that required medical certificate to get his Missouri commercial driver’s license.

"That should have been noticed by someone,” Crawford said. “He should not have received a commercial driver's license."

KSHB, a station owned by the parent company of RTV6, reached out to the Missouri Department of Revenue, the state agency that issues CDLs to ask how Pollard was able to obtain a CDL.

“We can’t comment on this because there is an ongoing investigation, “ Anne Marie Moy, spokeswoman for the Missouri Department of Revenue, said. "I am trying to discern more about the timing of the certification, although that may be protected information.”

KSHB has also tried to reach the Missouri doctors who evaluated Pollard and cleared him to drive, however, neither has responded to requests for comment.

Call 6 Investigates did some checking and found medical examinations for truck drivers include cognitive and behavioral testing including whether the driver can process environmental cues and make appropriate responses.

Gary Langston, president of the Indiana Motor Truck Association, said the trucking industry greatly relies on state examiners to make sure a driver is fit to drive a commercial motor vehicle.

The IMTA says carriers should have as much information as possible as to who is, and who is not fit to operation a CMV.

"This is an important job that subjects these people to the general motoring public every day,” Langston said. “If these types of things are problems, it's important that we know that."

When hiring drivers, Bestway Express, out of Vincennes, looks at a driver’s safety record, criminal background checks and whether the driver passed a medical exam.

“We've seen it where a driver that's diabetic is not allowed to drive a CMV that's insulin dependent, but somehow slipped through because the medical examiner didn't catch it,” McCormick said. “The system on that side is a little alarming if we're being honest. "

McCormick said while companies receive some information from the exam such as blood pressure, hearing and vision, they do not get information on a driver’s mental health.

“There is not much they disclose on that subject,” said McCormick.

Weston Transportation in North Kansas City hired Pollard in June 2019, and records show Pollard lied about his driving record and employment history to get that job.

McCormick said his company vets candidates as much as possible including by meeting them in person.

“It comes down to honesty and integrity of the driver,” McCormick said. “If they're not honest, there's no way we can catch that 100% of the time because we're reliant on other people seeing the signs of what that is."

What’s still not clear is how Bruce Pollard passed his medical exams in Missouri despite a documented history of serious mental illness.

What is clear is that a mother and her two daughters lost their lives in a crash that should never have happened.

Pollard will be sentenced on March 27.

Under terms of his plea deal, Pollard faces three to nine years at an Indiana Department of Corrections mental facility.

PREVIOUS | Semi-truck driver in deadly Indiana crash that killed three was cited 10 times in Missouri|Why prosecutors consider this crash a crime, but not others|| Semi driver from crash that killed mother, twin toddlers showed no remorse, according to court docs | Mother, twin daughters killed in fiery I-465 crash identified