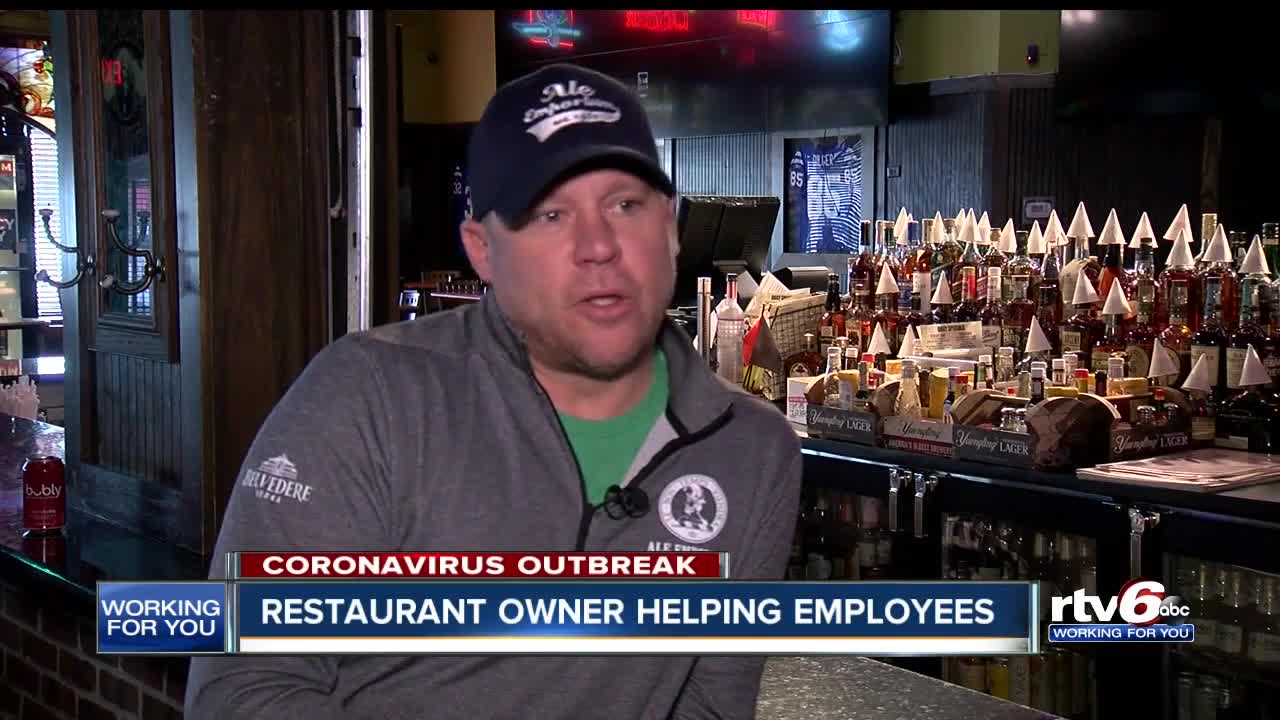 The owner of Ale Emporium is making sure his 300-and-some employees receive a paycheck for the next couple of weeks despite forced closure.

INDIANAPOLIS — Many restaurants and bars are doing what they can to support their employees during this difficult time.

That includes Ale Emporium, a popular bar on 86th Street and Allisonville Road on the northeast side of Indianapolis, as workers there will continue to get an income despite closures.

LIST |New hours/specials for restaurants and grocery stores in Indianapolis |

The owner of Ale plans to continue paying kitchen and salaried staff their regular wages and paying tipped employees their average weekly rate.

"They've all been really appreciative. We just thought it was the right thing to do, and I think they all know that," Scott Baun, owner of Ale, said.

"It's wonderful. I've worked here on and off for 18 years. Obviously, it's a wonderful company and a wonderful family to work for," Natalie Perkins, a bartender at Ale, said. "They defintely embrace their core family values, and that's what they're going to do with us; they're not going to let anyone ... go without. They're going to do everything they can — they always have, they always will."

Baun says there are about 300 employees combined at Ale's three locations.

Baun will also be providing staff and their families with one free meal per day.

On Friday, about 30 cars were waiting in line for pick up.

WRTV began its efforts with "We're Open Indy" in March of 2020 as a way to highlight local businesses' efforts to adapt and provide a boost to help them get through the pandemic. Not all of them made it. But those that have are still facing an uphill battle. We worked to get updates from some of the business owners we spoke to earlier in the year to hear how it's been for them and what they project the near future of their businesses to be like.

Ale Emporium Manager Josh Williams says the community has been supporting all of its locations and other local businesses.

"They don’t want to see any of us go away at the end of the day, and it’s really been sobering to see the community outreach just in general," Williams said.

At the beginning of the pandemic, curbside carryout took off and has helped sustain the business.

"We couldn’t wait to open the doors back up for dining. Just trying to figure out how that was all going to work, with a different capacity issues, and those guidelines constantly fluctuating, we have really had to adapt as we go," Williams said. "Thankfully our staff has been great about adapting along with us. And then also the customers, we don’t run into too many problems with people not wanting to abide by the rules. Which is really a blessing. I think we were really not looking forward to having to police all of these different guidelines and that it has really not been as big of an issue as when we first started."

Williams says the biggest lesson he learned during the pandemic was to help each other out.

"I can’t speak enough for our staff here, how they have all helped each other through different trials and tribulations that they have had to deal with during this time," Williams said. "Whether it be loved ones that become ill, people have stepped in, taking dinners over. It has really brought everyone together in a way that we didn’t see before."