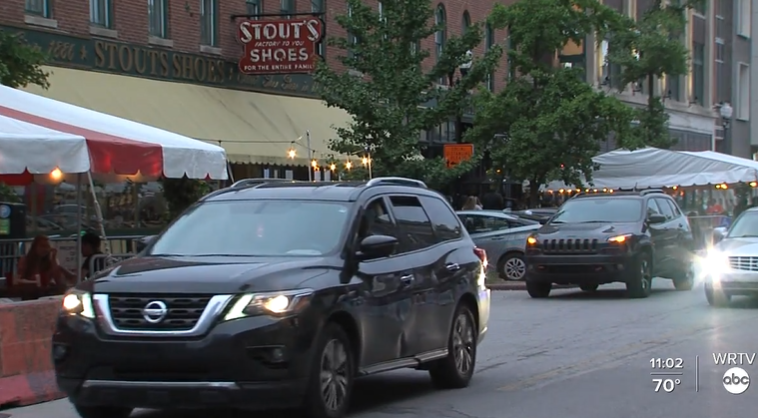 INDIANAPOLIS — Traffic is flowing once again on Indianapolis streets that were closed to vehicles back in May.

The closures along part of Broad Ripple Avenue and Massachusetts Avenue downtown, allowed people to remain socially distant while supporting restaurants and stores.

Now, for the first time in months, there are cars driving on both streets. It is the latest development businesses are adapting to in the unpredictable year.

"You know what, I like seeing the avenue with cars and not just walking, but I mean its stressful," Jason Mugg said. "Because you worry about public safety you worry about making sure your staff is safe with cars going feet beside people sitting in their chairs and what not."

Mugg is the owner of 9 Irish Brothers, which is hosting customers at limited capacity for indoor and outdoor dining. Both at a safe social distance.

He says reopening Mass Ave to cars will allow some closed businesses to reopen, which could mean additional customers nearby.

"Any progress is good progress, that's correct," Mugg said. "Anything that helps my staff out to make their bills, obviously anything that helps me make bills, and give enjoyment to people who for a long time were stuck inside and what not and want to come out and enjoy a little bit symbolism of what we used to be able to do."

Mugg and other business owners have gotten used to adapting this year, to keep their doors open and then adapting again when the plan changes.

Right now, the use of parking spaces for outdoor seating on Mass Ave is expected to last into October, but figuring out what happens when it's too cold to eat outside is what keeps this business owner up at night.

"Until that day comes it like until the day came of them opening up the street or until they decided to do street seating," Mugg said. "You just really don't know. One thing we've learned is you just gotta roll with what you are given and once that day comes you've gotta make the decision on it."