At IU Greek houses: COVID-19 is creating a world of problems

One student tells of her decision to leave campus 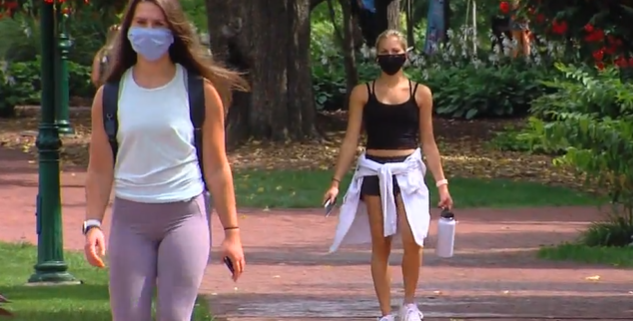 From elementary school to college, navigating the pandemic continues to be a rocky road.

Indiana University is now encouraging all students to move out of Greek Houses after dozens of sorority and fraternity members were ordered into quarantine.

Riley Sample is one of those students.

"When you're living in a communal environment like a sorority house, if there's even a couple people doing the wrong thing it just kind of affects everyone," Sample said.

Sample decided to spend the remainder of quarantine at home so she didn't have to deal with any problems.

"When you're quarantined in the house, you have to have people bring the meals to you and that gets to be an issue because there aren't enough girls around to bring you meals," Sample said.

Riley's father, Stephen Sample, is an emergency room physician who prepared his daughter for this scenario to happen.

"I expected this. I gave it two weeks when she left and I think she thought I was joking. I was not," Dr. Sample said. "When you stick kids together, 80 to 100 kids in a house, there was just no way this was going to end up any other way."

He tweeted about his daughter's situation. It's one that in some form or another is playing out across the country for millions of families. Dr. Sample thinks this situation could have been avoided.

"I think it's unfortunate that we don't have a good, solid national plan for this. Everybody is winging it," Dr. Sample said.

This lack of a national plan or strategy leaves colleges students like Riley in a state of limbo. They're trying to plan out their future during these uncertain times.

"To my college peers, I think this just goes to show this is serious and that we have to take this seriously or we're not going to be on campus at all," Sample said.