Federal government plans to publish by end of May 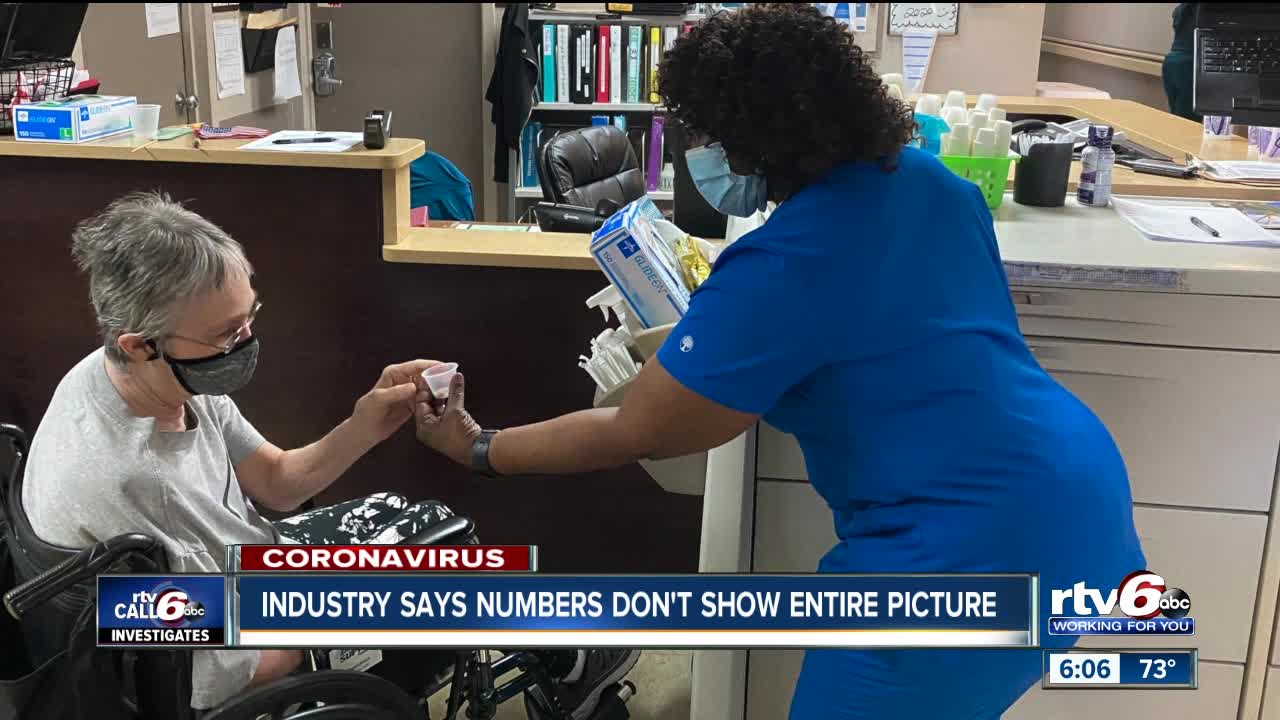 As Central Indiana families fight for more transparency when it comes to COVID-19 cases and deaths at nursing homes, Call 6 Investigates has learned the information may soon become public despite the state’s efforts not to release it.

INDIANAPOLIS — As Central Indiana families fight for more transparency when it comes to COVID-19 cases and deaths at nursing homes, Call 6 Investigates has learned the information may soon become public despite the state’s efforts not to release it.

Deaths at long term care facilities make up 41% of the state’s total, but nursing home residents comprise only 12% of positive cases, according to aggregate data from the Indiana State Department of Health.

The state is only releasing the overall number of people who have tested positive and who have died in nursing homes.

But state leaders are not saying where the nursing home outbreaks are happening and where residents have died from COVID-19, citing “privacy” concerns.

However, Call 6 Investigates has learned the federal government is gathering the data anyway and plans to release it at the end of May.

David Johnson lives in Indianapolis, and is one of many taxpayers concerned about the state not telling the public where nursing home deaths are happening.

He’s had two family members at Glenburn Home in Linton including his sister-in-law who died in April there from pneumonia.

“She was never tested,” said Johnson. “I don’t know if they reconfirmed her as a COVID-19 case or not.”

Johnson says he’s encouraged by the fact that Glenburn Home has posted daily updates on COVID-19 cases and deaths on their website and Facebook page—something they are not required to do by law.

The state’s long term care communication guidelines says nursing homes only have to send daily email updates to residents and their families about the number of new cases in the last 24 hours, the total number of cases, and if there are three or more new cases of respiratory illness that have occurred in the last 72-hours in residents and/or staff within the facility.

Families can request information about deaths at the nursing home, but the facilities are not required to include that in their daily updates.

"Glenburn Home is being totally transparent,” said Johnson. “Everybody in the community knows about it. That's the standard that frankly the state should be doing."

Glenburn Home released a statement to RTV6 saying they have an obligation to keep the public informed because their neighbors are also impacted by the virus.

“A failure to communicate during these times leaves families uninformed, which creates an additional burden in addition to that they are already experiencing,” read the statement from Glenburn Home. “It also creates anxiety and speculation in the community, resulting in stories and rumors at a time when our residents, families and employees deserve better."

Johnson said there’s no reason why the state can’t require nursing homes to do what Glenburn Home is already doing.

“I listen to the Governor and Dr. Box very carefully and I really like what they’re doing and they seem to be very transparent on everything but this,” said Johnson. “I can handle seeing all these numbers down at Glenburn. It’s really sad, but I’d rather see that than nothing than families left in the dark.”

Seema Mohapatra is a professor at IU McKinney School of Law who focuses on health care law and bioethics.

She says the state and nursing homes should release COVID-19 case and death information, by facility, as a way to protect public health.

"The workers are coming in and out of those facilities, so there is also a potential risk for general public about what the infection rates are in long term care facilities,” said Mohapatra. “I think it's all the public interest and public trust right now. They need to show us their trustworthiness by reporting these kinds of cases. "

Neighboring states like Illinois are providing their citizens with fully comprehensive data on cases and deaths at the facility level.

But the Indiana State Department of Health denied numerous requests from Call 6 Investigates to do the same.

“ISDH is providing aggregate totals at this time and is not breaking down cases by facility due to privacy reasons,” the Joint Information Center said in an April 24 email response to RTV6.

Call 6 Investigates filed a complaint with the Indiana Public Access Counselor and we are still waiting on an opinion.

"Legally there's nothing preventing the facilities or the health department from giving this information," said Mohapatra. “I think it’s important in this time of panic and concern to give families as much information as possible. The more information you can give and release, the better it is from a public health point of view.”

Mohapatra also pointed out at a time when visitors are restricted, there’s fewer people able to see when something is wrong with a loved one.

“Indiana has a bill of rights for nursing home residents which protects their personal private information, but there’s nothing that prevents a facility from providing information to the public about coronavirus cases or deaths,” said Mohapatra. “It looks like you have something to hide if you’re jumping through so many hoops to say you can’t release this information. If you have nothing to hide you’d release them very easily, which is worrisome for families and the general public.”

When the public isn’t informed, they may assume the worst about a facility or their loved one’s health.

“We really need more information, not less at this time,” said Mohapatra. “If you have a family member, it’s going to make you feel better to know what the facility is doing.”

Nursing homes are mostly publicly funded with your tax dollars through Medicaid and Medicare.

A new federal rule published on April 30 makes it mandatory for nursing homes across the country to report the number of COVID-19 infections and deaths to Centers for Disease Control.

The U.S. Centers for Medicaid and Medicare Services (CMS) plans to publicly report the data collected by CDC in a few weeks, according to CDC public affairs spokeswoman Kate Grusich.

“CDC must first onboard and train thousands of nursing homes on the use of the reporting tool to make sure the data is entered into the system accurately,” said Grusich.

The data is expected to be released at the end of May.

"So people in Indiana, even if the State Department of Health doesn't release it, we should have much more understanding," said Mohapatra. “The onus is on the state and the facilities to be giving this information, and now the federal government has made it clear that they want this information as well.”

President Zachary Cattell said once the federal government releases the numbers, the public needs to take them with a grain of salt.

COVID-19 Testing of nursing home residents and employees has been hit or miss across the state.

"If we were able to test everybody at the same time, or relatively at the same time, and do so consistently overtime that data would be more reliable and more valuable to the public and to public health officials,” said
Cattell. “But that's not where we're at right now."

Cattell said the public needs to keep in mind the elderly are more susceptible to the virus, especially if they’re living in congregate settings.

Just because a nursing home or assisted living facility has a high number of cases or deaths does not mean the facility has done anything wrong, said Cattell.

"With regard to the perception that nursing facilities have done something wrong, because the virus attacks elderly and vulnerable populations more than others, I think is a wrong perception to have," said Cattell.

The trade association is working on gather its own data including recoveries.

“We can learn from the data and learn from best practices and make sure we have all the tools to attack this if a vaccine is not available for some period of time,” said Cattell.

What You Can Do

If your family's nursing home is not providing the information at your request, you can report it to familyoutreach@isdh.in.gov.

Call 6 Investigates is also tracking nursing home cases in Indiana, and we want to continue to add to that list.

Glenburn Home and other long-term care facilities through-out the State of Indiana are in the midst of a war unlike any we have dealt with before. With any communication we issue, we are bound by our own ethics, as well as federal law under the Health Information Portability and Accountability Act (HIPAA), to protect the privacy of our residents and employees. We do provide private daily and weekly updates directly to our resident’s family members or representatives and we contact family members or representatives of our residents as the condition of their loved ones and their associated plans of care change. However, we also have an obligation to keep the public informed of the overall impact the COVID-19 virus is having on our facility, as that also greatly affects our friends and neighbors in the community. A failure to communicate during these times leaves families uninformed, which creates an additional burden in addition to that they are already experiencing. It also creates anxiety and speculation in the community, resulting in stories and rumors at a time when our residents, families and employees deserve better. Thus, we provide daily updates on our website and FaceBook page.

Our mission and responsibilities at Glenburn have never been more clear. We will continue to fight as hard as we can in caring for our residents and employees until this passes. We cannot thank our employees enough for the commitment and fortitude they display each and every day during this fight.