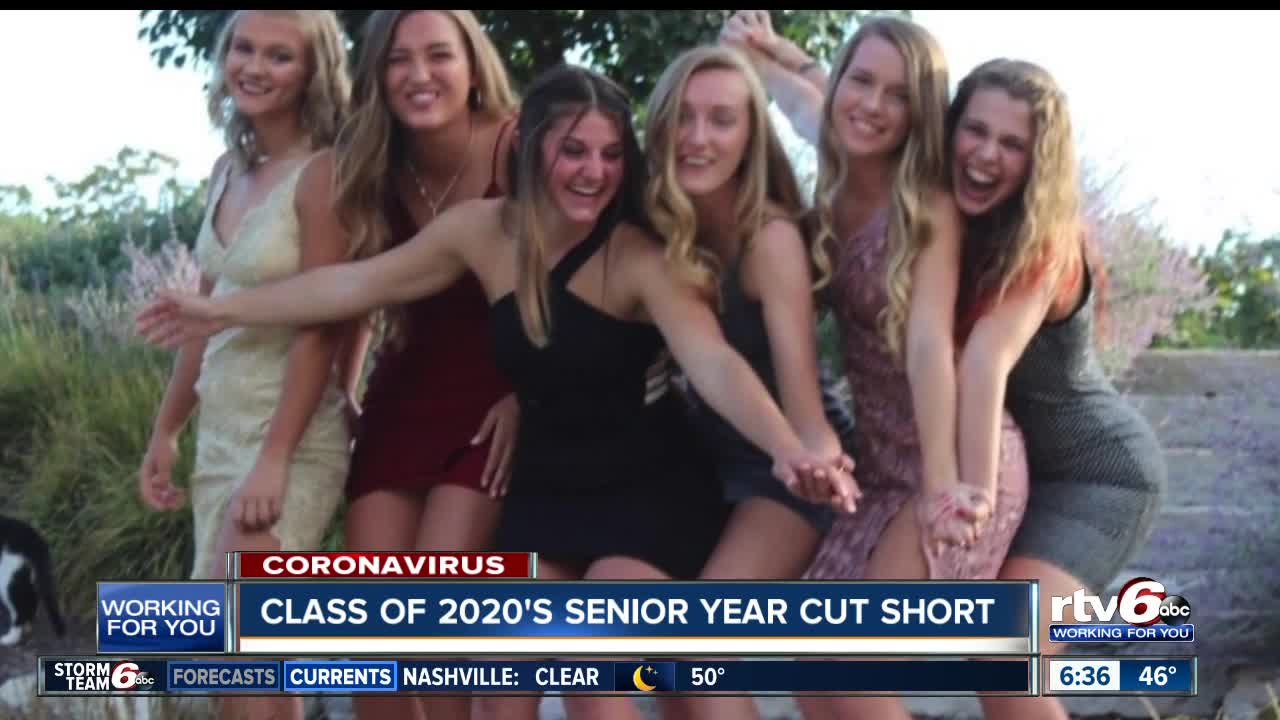 The coronavirus is having an impact on all of us, but for seniors in the Class of 2020, they could potentially miss out on huge and important milestones in their lives.

INDIANAPOLIS — The coronavirus is having an impact on all of us, but for the seniors in the Class of 2020, they could potentially miss out on important milestones in their lives.

While the thought of missing out on graduation, senior prom, and so many memories made in the last year of high school, the seniors I talked to say what's happening in the world right now is also solidifying their future career plans.

"It's really hard because I have been looking forward to graduation and even senior prom and senior spring break since I was a freshman," said Julia Falcone, a senior at Center Grove High School.

Falcone said she's trying to stay positive even though right now, all she thinks about is the things she and her classmates are going to miss.

"I've been making these memories and building up relationships with all of these people for four years, and I don't get to say farewell," said Falcone.

And just to the northeast, at Greenfield Central High School, Cael Savidge and Elliot Lambert are bummed because their senior band season is canceled.

"It's kind of just a surprise; it all happened so all of a sudden, it felt like the rug just got taken out of our feet," said Savidge.

"My senior year is going to be based off of a few good things happening my first semester and the rest of it being taking by this COVID outbreak," said Lambert.

Savidge told me he doesn't know yet what he wants to study in college, but both Falcone and Lambert said this crisis had solidified their future career paths.

"It's kind of solidifies what I want to do. I want to go into music education," said Lambert.

He said without an in-person instructor he's having to teach himself new music, and the spring concert music they've been working on probably won't be played.

She said she's always been interested in the health field, and what she's seeing makes her more passionate about it.

"I see how health professions are needed in a time of crisis and how big of an impact it can have on people's lives, and that makes an impact on the world, and I want to do that," said Falcone.

And if given a chance, the students said they would ask school leaders this.

"I would ask them to have a prom and a graduation because I feel like I have been looking forward to senior prom for… ever," said Falcone.

Most senior girls have already bought their dresses for both graduation and prom, and the boys have rented their tuxedos. They said they would be happy to make these memories even if it's after the school year is technically over.

"Absolutely make it happen because this is what we have been looking forward to since for four years minimum," said Lambert.

"We can never get those memories back, so I'd be really excited if I had those last chances, and I can speak for the other seniors who don't want to miss out on any of those memories," said Savidge.