Indiana gubernatorial candidates debate for last time before the election 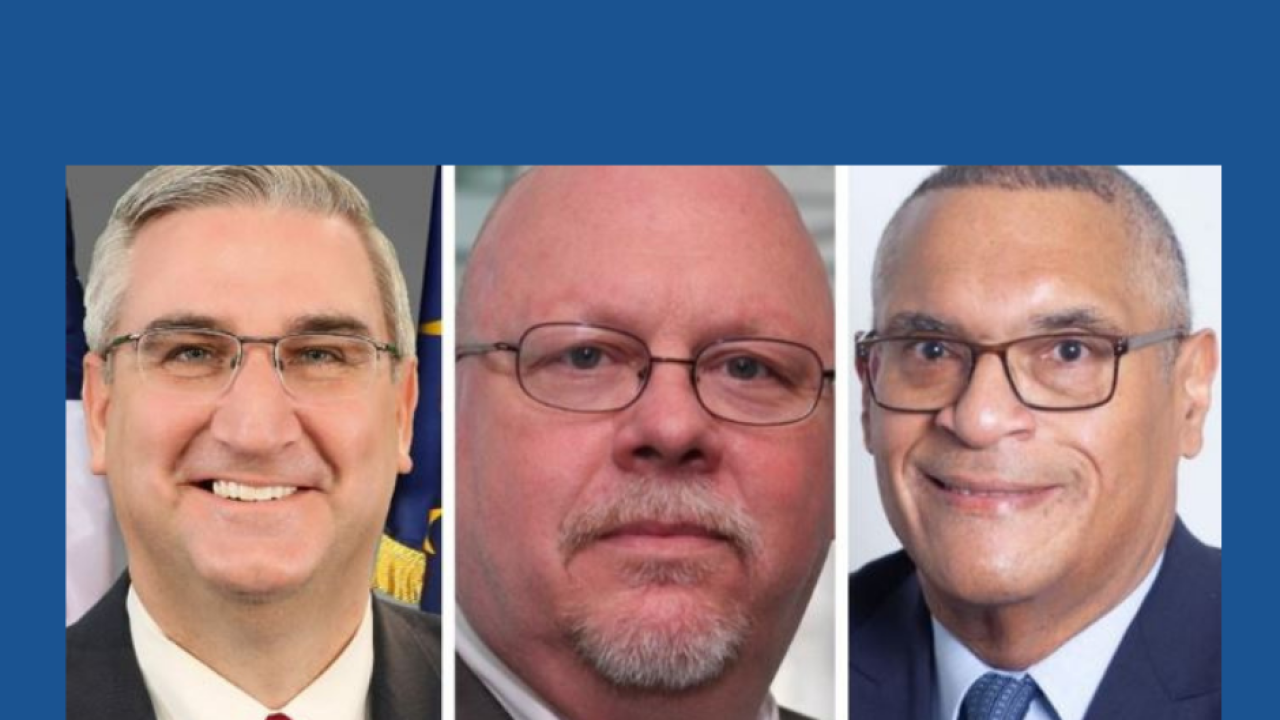 INDIANAPOLIS — For the final time before Election Day, the three candidates to be the next governor of Indiana debated the issues on Tuesday.

Addressing topics from expanding reliable, affordable broadband to all Hoosiers to whether or not the state should decriminalize or legalize marijuana, Republican Gov. Eric Holcomb, Democratic challenger Dr. Woody Myers and Libertarian challenger Donald Rainwater made their case why voters should choose them.

The Indiana Debate Commission hosted the debate at the WFYI studios with the candidates in-person, however, the candidates and the moderator were in separate areas.

Here are a couple of the questions posed to the candidates.

Q: Should marijuana be decriminalized or legalized in Indiana?

Myers: My position on this has been very clear from the beginning. It is time to decriminalize simple possession of cannabis in the state of Indiana. It makes no sense to be on the border between Indiana and Illinois and walk across the border and become a criminal. It's also time for us to legalize medical marijuana in Indiana. That's going to be a big step for our state but it's an important one that it's now time to take. I've read the literature carefully and I know for a fact there are conditions that respond to the cannabinoids which include CBD and THC. It's time to allow Indiana physicians to be able to prescribe those substances for their patients. It's also time to make sure that our veterans are getting the substances that they need, the THC they need in order to treat PTSD and some of the other complications that they've suffered as a result of their service to our nation. It's time for Indiana to change.

Holcomb: I have been very clear and consistent from the very outset in 2017 when this issue first came up. I mentioned that I've taken a couple of oaths in my lifetime, one when I was in the United States Navy and another when I was sworn into this office. I don't have the luxury of picking and choosing which laws to legalize at the state level while they are illegal at the federal level. To deal with this, though, I said I will directly write to the federal government, I did, and offered, we got one of the best ag schools in the country and we've got the best medical school in the country, Purdue and Indiana University. We wrote to the FDA, we wrote to the CDC and we said let's do some medical research on this. That's the focus group that you want just like any other controlled substance or drug that needs to be approved. In the meantime, there are alternatives for those who are in pain. I'm not against researching this medically but it needs to be done before we can respond in an intelligent way.

Rainwater: I am for the complete deregulation and legalization of all forms of cannabis. First of all, let me make one thing really, really clear. What you've heard from the other two candidates, in a nutshell, is we want to reward big pharma with medical marijuana and keep it from the citizens of Indiana and that's wrong. It's plain wrong. We have an economic crisis in our state and we have the ability to create new agricultural, manufacturing and retail opportunities for Hoosier business owners just by legalizing and decriminalizing cannabis. Any other discussion about needing to research something that has been around for decades is just misinformation and frankly should be insulting to every Hoosier.

Q: How will you help expand reliable broadband internet to all Hoosiers?

Rainwater: What we need to do is deregulate the broadband industry in Indiana which will allow new, innovative businesses and technologies to come in and provide the types of broadband in rural areas that currently they're not able to do because they can't compete with the government-manipulated monopolies that are here in the state of Indiana. So through less government we can actually create a scenario whereby we get better competition and better technologies, more innovation and actually give people the types of services that they need in the private industry market instead of pushing that with government funding.

Myers: 68 percent of small companies in Indiana tell us they don't have sufficient internet. 80,000 Hoosier kids in our state, about 70 to 80,000 don't have the internet they need in order to do their schoolwork. About one in five families doesn't have broadband in our state or good access to it. The programs we've put in place so far just aren't working. We've got to change our approach. A $100 million grant program isn't the answer. The answer is to treat the internet as a utility. It's no longer a luxury for someone to have internet. It's not just for watching your favorite show. It's for paying your bills, it's for getting your healthcare, it's for paying your taxes. It's for getting your job done if you're a remote worker. Our approach to broadband in this state has failed and it's time for us to do much, much better than we have.

Holcomb: We didn't wait on this problem and it didn't take COVID-19 to wake us up. We saw a program that is investing the biggest cash infusion into a state program to connect people with high-speed, affordable internet for telehealth reasons, for tele-education, for tele-commuting. We were doing that before COVID-19. We're also partnering with the corporate sector to make sure we get out to — Indiana is about 83, 84 percent still farm or forest terrain, rocky terrain, expensive terrain — we can expand that playing field by partnering with the corporate sector and we've already done $79 million and that's brought in another $70-plus million. We've got about another $20 million to go in a third round. That's in addition to the $61 million we took and invested, and listened to schools quite frankly, and said do you need devices, do you need training, do the teachers need it, do the kids need it and we infused that $61 million right before or as COVID-19 was washing upon our shore.

Watch the debate to see their answers to all the questions: