Analysis: Assault rifle ban would have little to no effect on Indianapolis gun crime

INDIANAPOLIS -- An Indianapolis city councilor’s newly proposed ban on high-capacity magazines and the class of semi-automatic rifles commonly referred to as “assault rifles” would likely have little impact on gun crime in the city, according to an analysis of IMPD gun trace records conducted by RTV6.

Indianapolis City-County Councilor William D. Oliver (D) announced plans to introduce a special resolution this week that would urge state lawmakers to enact a ban on high-capacity magazines and assault rifles similar to the Federal Assault Weapons Ban that was in effect from 1994-2004.

That ban, and a new version being pushed by Sen. Dianne Feinstein (D-California), effectively outlawed possession of rifles like the AR-15, used in the deadly shooting at a Parkland, Florida, high school, and the SIG MCX, used by the shooter in a 2016 shooting at an Orlando nightclub that killed 49 people and injured 58 others. The 1994 assault weapons ban grandfathered in weapons produced or purchased prior to the law’s enactment.

Oliver’s proposal, which was heard at Monday night’s City-County Council meeting, is, at least on paper, aimed at preventing Indianapolis from experiencing a similar mass shooting incident. And there is at least some evidence, including a 2015 study by researchers at The George Washington University in Washington, D.C., that the rate of mass shootings did decline during the 10 years the Federal Assault Weapons Ban was in effect.

But the real motive of the proposal, Oliver said, was to start a broader conversation about gun violence.

Oliver himself admits that, as a palliative for the city’s persistent problem with gun violence, a ban on assault rifles would likely have little to no effect. And an analysis of IMPD gun trace data bears that out.

Of the then-record 149 murders in 2016, only 3 were committed with rifles of any sort. Indianapolis again set a murder record in 2017 with 154 murders. Of those, only six were committed with a rifle. So far this year, only two murders have been linked to rifles – although one of those is the fatal shooting of 1-year-old Malaysia Robson.

Since at least 2013, rifles have accounted for, on average, 8.76 percent of what IMPD calls “crime guns” – guns seized by officers during a criminal investigation. Last year, of the 3,630 guns seized and traced by IMPD, only 321 were rifles of any caliber. “Assault rifles” play an even smaller role in Indianapolis crime.

In 2017, the three most popular calibers of ammunition for AR-15-style rifles – 223 Remington, 5.56x45mm and 7.62x39mm – accounted for less than half, 46.7 percent, of all rifles seized and 4.13 percent of all crime guns. Those calibers made up just 3.35 percent of the 3,218 crime guns seized in 2016. In 2015, those three calibers combined accounted for less than 100 crime guns, out of a total 2,595 seized by the department. And the available data doesn't make clear whether the guns were seized in connection to a shooting incident or for a non-shooting crime, like illegal possession of a firearm. 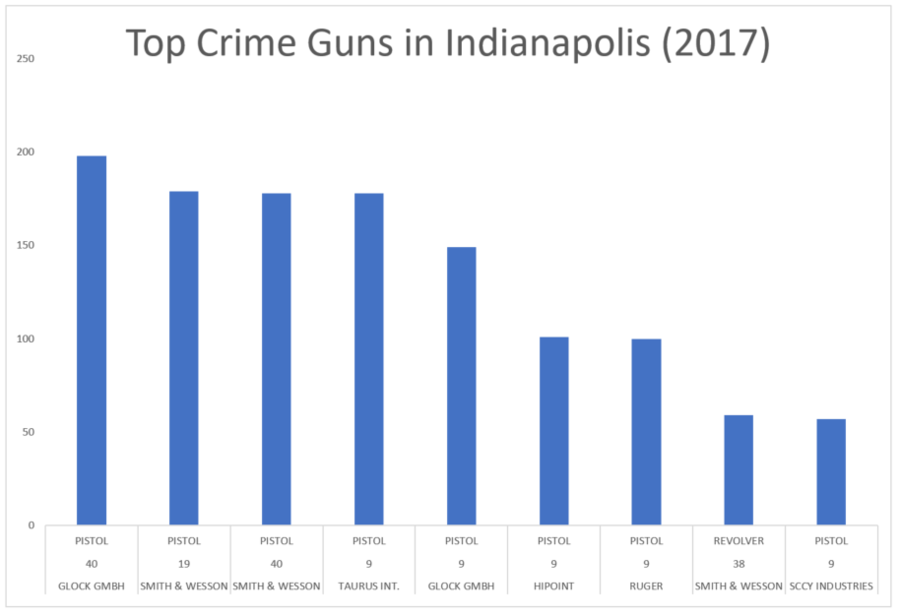 For Indianapolis, as in the rest of the country’s metropolitan areas, handguns remain far and away the most popular crime guns. In 2017 alone, 931 9mm handguns were seized – more than 6 times the number of all assault rifle-caliber weapons combined. In fact, not a single rifle makes an appearance on the list of the city’s most common crime guns in 2017 until the 43rd spot – held by .22-caliber bolt-action rifles manufactured by Marlin Firearms Co. Being bolt-action, those guns would not be banned under Oliver’s proposal.

Even if passed by the council, Oliver’s proposal would face an uncertain future, at best, in the Republican-controlled state legislature – which has shown much more interest in recent years in easing restrictions on firearms ownership than in tightening them.