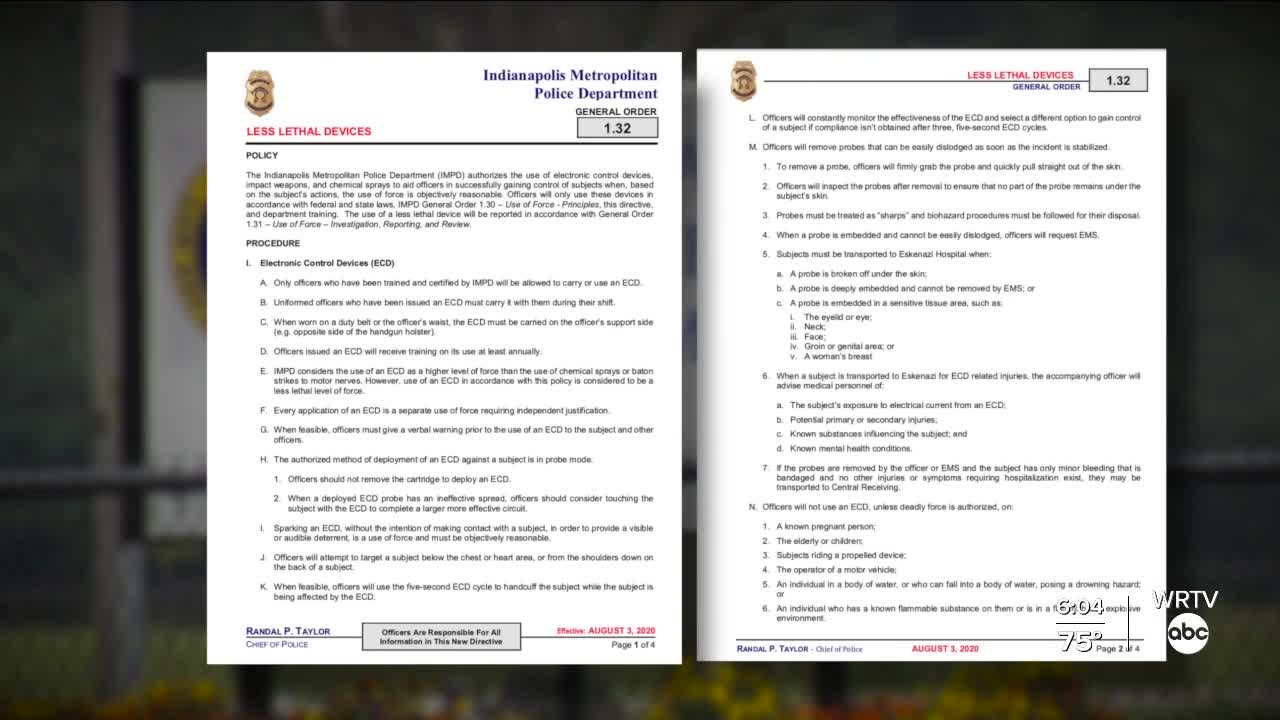 The Law Enforcement Training Board is at odds with the new training reforms implemented by the Indianapolis Metropolitan Police Department this summer.

INDIANAPOLIS —The Law Enforcement Training Board is at odds with the new training reforms implemented by the Indianapolis Metropolitan Police Department this summer.

Following two police involved shootings in May and months of peaceful protests calling for social justice, defunding police and changes to departmental policies, the city and IMPD moved to step-up police department reforms.

By November, all Metro Police officers will wear body cameras, and in August IMPD officers began to work under two new General Orders.

General Order 1.30 requires IMPD officers to de-escalate encounters and puts in writing what was already not allowed: no choke-holds.

General Order 1.32 spells out the use of tasers and chemical sprays.

Both orders are now under the microscope of the Law Enforcement Training Board. The group representing law enforcement statewide says it has the obligation to review training practices before they are taught.

In a letter to the Metro Police Chief Randal Taylor and Indianapolis Mayor Joe Hogsett, the board raises concerns saying it was led to believe that training on the new orders would not begin until 2021.

Board Chair Doug Carter, who also serves as State Police Superintendent, wrote “You committed to the LETB (Law Enforcement Training Board) that we would be allowed to review your lesson plan prior to starting the in-service training.”

The Board says it was informed that about half of Metro's officers have already undergone training that has not been approved.

The city of Indianapolis is pushing back on the letter from LETB. In a statement to WRTV, Corporation Counsel Donald Morgan says “IMPD’s decision to update its use-of-force policy has understandably generated great interest. It has also generated criticism from those opposed to bringing national best practices to Indiana. We will continue to work with the Board to help them better understand the department’s new policies and the relevant law, and we will provide the Board a more thorough response after we have completed our review of its letter."

LETB is also raising questions about the overall use of force policy. The group is concerned the way the orders are written violate federal case law by limiting officers and putting them in harm’s way. While the Law Enforcement Training Board unanimously opposes teaching the choke hold technique to law enforcement, it supports any tactic that may include a choke hold or neck restraint in a deadly force encounter.

The letter gives the city until around September 22nd to respond to a series of questions including:

“Explain why an absolute prohibition to a “choke hold” and “lateral vascular neck restraint” may not be employed by a law enforcement officer in a deadly force situation.”

Another question the Board wants answered: “Are officers expected to comply with the new IMPD General Order 1.30, specifically as it pertains to proportionality and neck restraints, after completing the two-hour in-service training block?”

Behind the scenes, WRTV has learned there’s a desire to resolve this matter and avoid any possible legal action.

“The LETB has been informed by legal counsel of the range of options available for the enforcement of training standards but resorting to those measures, the LETB would like to engage in a frank discussion on this topic regarding modification of the lesson plan to comply with Graham v Connor,” said Carter in his letter.

On July 29th, the city made public a long list of reforms to address the call for accountability and reform.

In a city-issued press release, Mayor Hogsett said, “From implicit bias and de-escalation training, to the proposed Use of Force Review Board, to these updates to IMPD use of force policies – these changes aim to ensure IMPD better serves every member of the Indianapolis community.”

General Order 1.30 went into effect in August 3rd detailing the use of de-escalation tactics such as communication, time, and distance during a situation. It prohibits the use of choke holds or any similar neck restraint, and requires officers to prevent or stop the use of excessive force by another officer and to report any incidents to a supervisor. The order prohibits shooting into or from a moving vehicle.

General Order 1.32 also went into effect on August 3rd. It details when and how less lethal devices can be used. The department says the policies will be reviewed on an annual basis

The LETB held an emergency executive session on Friday, September 4 to address its concerns with the IMPD General Orders. Representatives of Metro Police were present at the meeting.

Since receiving the letter, the city has been preparing its response to LETB.

In response to our media request, the city countered the Board’s claims.

“…the Board appears to take issue with IMPD’s adoption of a new use-of-force policy that reflects national best practices and grew out of sustained community engagement. Based on our initial review, we have serious concerns that the Board’s letter contradicts relevant law and misstates the scope of its own authority, “ said Morgan.

He went on to say, “The letter appears to suggest a police department may never prohibit any conduct unless it is so extreme that it would violate the United States Constitution. That is not the law in Indiana or anywhere else. The Board is tasked with setting minimum police-training standards that ensure constitutional minimums are respected. It has no statutory authority to prevent a police department from listening to community feedback and deciding to hold itself to a higher standard than the constitutionally mandated bare minimum.”