Officer in Aaron Bailey shooting: 'I thought I was going to die that night'

FOP pushes back in Day 2 of merit board hearing 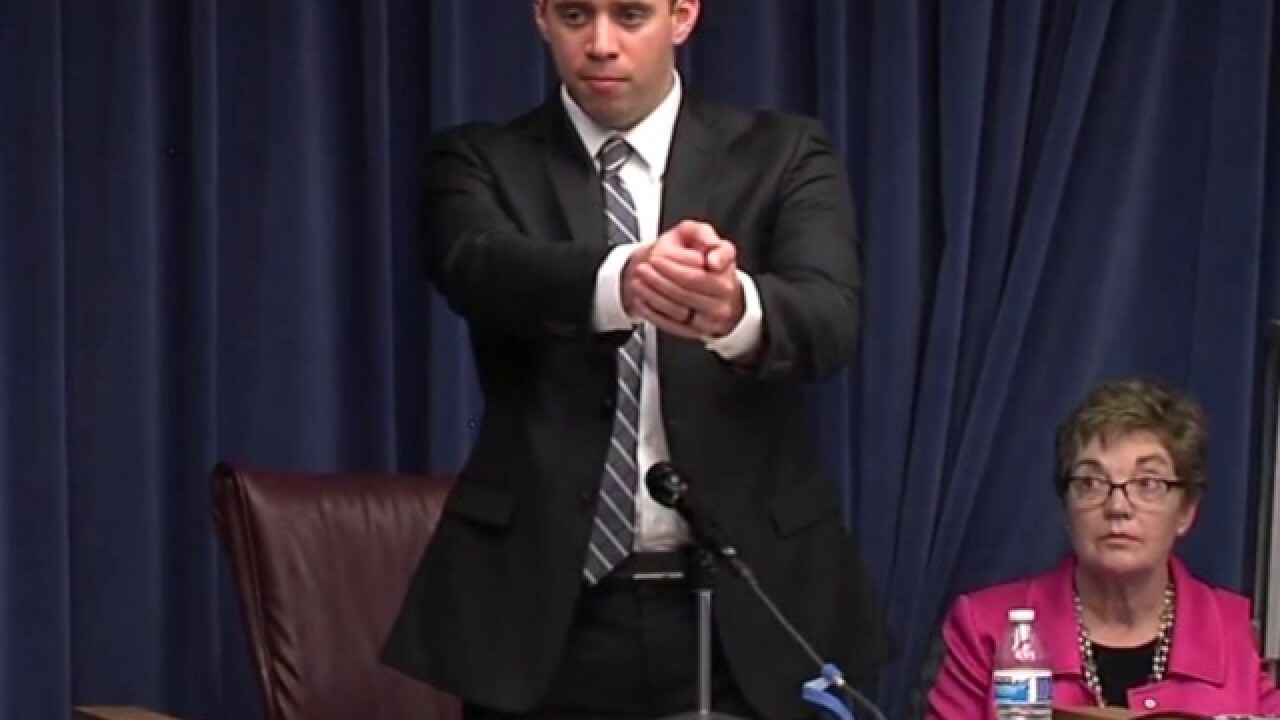 Copyright 2018 Scripps Media, Inc. All rights reserved. This material may not be published, broadcast, rewritten, or redistributed.
<p>IMPD Officer Carlton "C.J." Howard demonstrates how he issued commands to Aaron Bailey prior to Bailey's fatal shooting in June 2016.</p>

INDIANAPOLIS -- IMPD’s case for the termination of the two officers who fatally shot Aaron Bailey was put to the test Wednesday during a bruising day of testimony led by FOP attorney John Kautzman.

Kautzman, a veteran lawyer with more than 30 years of experience and a frequent speaker at the National Fraternal Order of Police Legal Counselors Seminar, spent the morning grilling IMPD Chief Bryan Roach about his decision to recommend the termination of Officers Carlton “C.J.” Howard and Michal Dinnsen, despite a special prosecutor’s decision not to charge them with criminal wrongdoing.

Kautzman used the afternoon to call a series of officers who responded to the scene on June 29, 2016 – culminating with Howard himself taking the stand.

Before that, though, Kautzman brought Det. Brent Hendricks to the stand. Hendricks, a robbery detective who was assigned as the lead homicide investigator in the case, testified that Bailey’s autopsy showed the angle of his bullet wounds was consistent with the officers’ account of him suddenly turning as though armed with a weapon.

“The determination,” Hendricks said, “was that the only way that could have happened would have been if Mr. Bailey made a significant turn.”

Hendricks also testified that Bailey’s passenger, Shiwanda Ward, told him that Bailey said he “wasn’t going back to jail” prior to and while fleeing from police.

READ MORE | No charges for IMPD officers in fatal shooting of Aaron Bailey | Officers knew Aaron Bailey's passenger was 'being monitored' in homicide prior to shooting | Man was shot by two officers 'multiple' times | Man killed by IMPD officers was in-and-out of jail, convicted of 14 felonies | IMPD Chief: Officer-involved shooting a 'true test' of relationship between police & community

Chief Roach is being represented in the case by IMPD general counsel Melissa Coxey and city attorney Nabeela Virjee, with the office of corporation counsel.

On cross-examination, Virjee – seeking, as she put it, to demonstrate that Hendricks’ investigation was “inconsistent, inaccurate and incomplete” – questioned Hendricks about whether he had submitted all 500+ photographs taken at the scene to the IMPD Firearms Review Board. He admitted that he had not. He also said, after repeated prompting by Virjee, that he never pulled the report about Bailey that Howard and Dinnsen would have seen on their computers during the traffic stop.

Beyond that, though, the city’s attorney found herself playing defense during her own interrogation of Hendricks. Lines of questioning were met with frustration by board chairman Dr. David Wantz – Indy’s former, and last, public safety director – who wanted to know how they were relevant to the case. At one point, Virjee began to enter a document from an officer’s personnel file into evidence – only to abruptly stop.

Things are getting testy. The board chairman wants to know where Roach's attorney, Nabeela Virjee, is going with her questioning. Virjee: "I am trying to demonstrate that as an investigator [Hendricks'] reporting is inconsistent, inaccurate and incomplete.”

An effort to impeach Hendricks as a witness fizzled after Kautzman objected, pointing out that the detective couldn’t be impeached for documents and statements made by others. Hendricks’ cross-examination ended shortly thereafter.

The final witness of the day was Officer Howard himself, who, at Kautzman’s direction, recounted the events that led to Bailey’s shooting step-by-step.

Howard says he was concerned about an armed robbery on Bailey's record: "I believed this was an individual who had a history of violent
tendencies.”

Kautzman: “And an individual who has a history of possessing a gun, on at least one occasion.”

Howard said the traffic stop was proceeding much like any other, and that he wasn’t in fear for his life up until Bailey failed to comply with officers’ commands after fleeing from police and crashing his car.

In his first statement in a public setting since the shooting, Howard testified that when he saw Bailey turn in his driver’s seat, he thought he had already acted too late.

Both Howard and Dinnsen opened fire on Bailey after a brief flight from a traffic stop. According to Howard, he believed Bailey was reaching for a gun in his car’s center console.

“I see him hunched over, and all I can see is the back of his shoulders and his arms,” Howard said. “It looks like he’s trying to retrieve an item from between the back of his seat and the center console.”

Another officer testified earlier in the day that, while no gun was ever found, he did find something on the console that made him take a second look. It wound up being a cigar.

Howard testified that he believed Bailey had a gun when he shot him and all throughout the subsequent investigation at the scene.

The city’s attorneys will have the opportunity to cross-examine Howard when the hearing resumes Thursday. Following the remaining witnesses to be called in the case, a determination by the board was expected the same day.