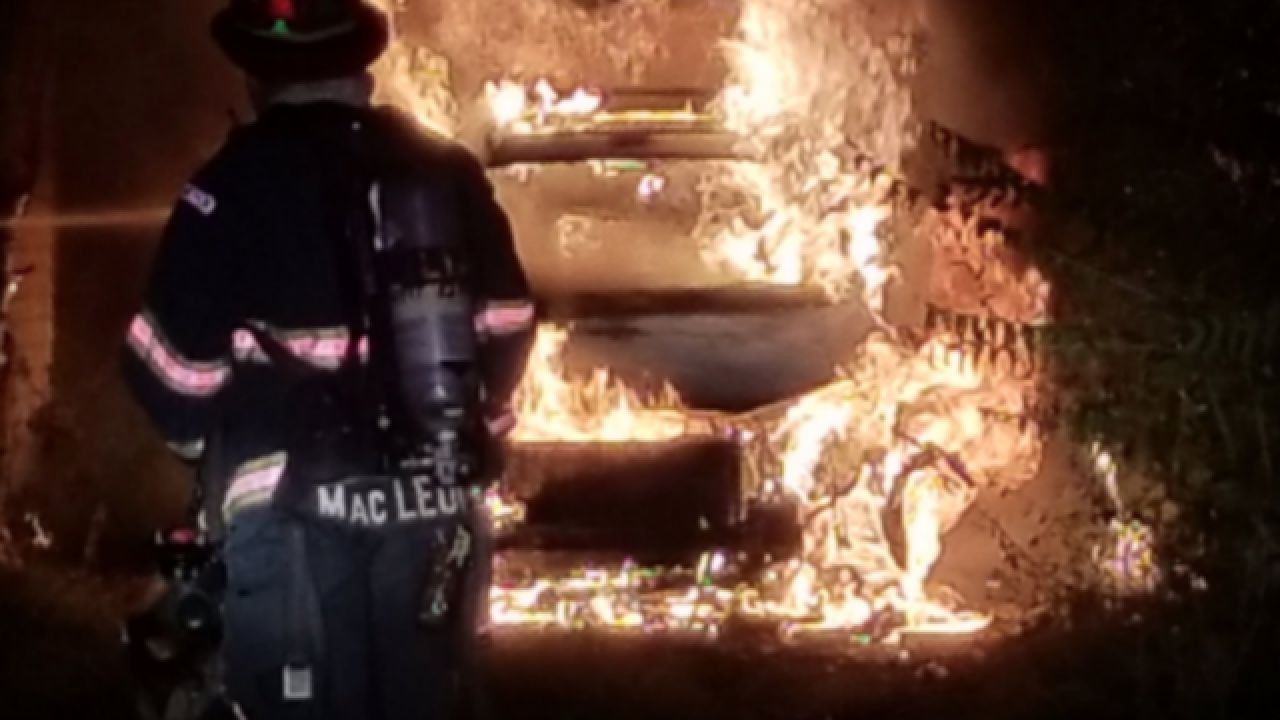 INDIANAPOLIS -- A suspect in the double murder of two women found in a burned car last month has been apprehended in Hammond, Indiana, police said Thursday.

Investigators have identified 30-year-old Tywan James as their chief suspect in the murders of Martina Webb and Aliyah Igartua.

Webb and Igartua were found dead inside a burned car on the west side shortly after midnight Sept. 30. An autopsy determined both women died of a gunshot to the head.

PREVIOUS | Coroner: Women found in burning car died of gunshots to the head

At first, it wasn’t clear why the women, who are both from Gary, Indiana, were in Indianapolis.

According to a probable cause affidavit filed in the case, Webb’s mother told police her daughter and a friend, Igartua, had driven down to Indianapolis to visit Webb’s boyfriend.

While visiting him, the women joined him at a house on Winfield Avenue where family members were having a get-together in honor of his cousin, Terrian Dawson, who had been killed a week earlier.

According to the affidavit, while Webb and Igartua were at the get-together, Webb’s boyfriend left them to go meet another girl he was dating.

Investigators later learned the boyfriend’s other girlfriend had a white Yukon registered to her – the same vehicle which witnesses reported seeing following the victims’ car into the alley where their bodies were found.

According to witnesses, a number of women present at the get-together were hostile toward Webb and Igartua and were acting as though they were going to fight them. Witnesses told police Webb and a man they knew as “Tywan” – later identified as Tywan James – began to get into a serious argument.

At one point during the argument, Webb allegedly told James, “Boy, ain’t nobody scared of you. Ain’t nobody worried about you” – to which he replied, “You must don’t know my name!”

Eventually, according to the affidavit, James walked up to the passenger side of Webb’s vehicle in a rage, pulled out a firearm and shot Webb through the open window.

Witnesses told police they then heard more gunshots, and saw James running down the street a short time later. Police believe that is when Igartua was shot.

According to the affidavit, an unidentified male then jumped into the driver’s seat of Webb’s vehicle and drove off with her body still in the passenger seat.

Evidence technicians recovered three spent cartridge casings at the scene, along with a swab of blood splatter from the sidewalk.

Prosecutors filed two formal charges of murder against James on Monday. He was apprehended in Hammond, Indiana, on Wednesday.