Abandoned dog left to die outside in crate in Marion, Ind.

Copyright 2018 Scripps Media, Inc. All rights reserved. This material may not be published, broadcast, rewritten, or redistributed.
Aimee Smith
<p>Gage Blackburn says his stepfather took the dog, a pitbull-chow mix named Lady, on Christmas Day after an argument with his mother.  A little more than a week later, Lady was found dead in a crate at the bottom of a hill in Marion.</p>

GRANT COUNTY, Ind. -- A $100 reward is being offered for information leading to the arrest of the person or persons who left a dog to die in a crate in sub-zero temperatures in Marion, Ind.

In a post on their Facebook page, the Marion-Grant Humane Society says the deceased dog was found Wednesday at the bottom of a hill on River Boulevard and Vine Street.

The post includes pictures of the crate covered in a blanket and the dog's body.

"She will never know how our hearts are broken because we could not help her but perhaps there could be some justification in finding the perpetrator," read the Facebook post.

The Marion-Grant County Humane Society says the persons responsible have been identified and it is "up to Marion Animal Care and Control and the police department to arrest them."

Gage Blackburn is the dog's owner. Blackburn says he and his mother got a new house and the landlord didn't want 'Lady', a 5-year-old pitbull-chow mix, inside.

Blackburn says he thought the dog would be fine when it was given to his stepfather. He now believes that his stepfather killed 'Lady' as a way to retaliate against his mom.

"He knew it would hurt her, because it hurt me real bad. She was like, she was my best friend. She was everything to me. He knew it hurt her bad to see me hurt," said Blackburn.

Marion Animal Care & Control is leading the investigation into the dog's death with the assistance of the Marion Police Department.

Police say the case is pending the autopsy of the dog and no arrests have been made.

Warning: graphic images of the dog in the post below 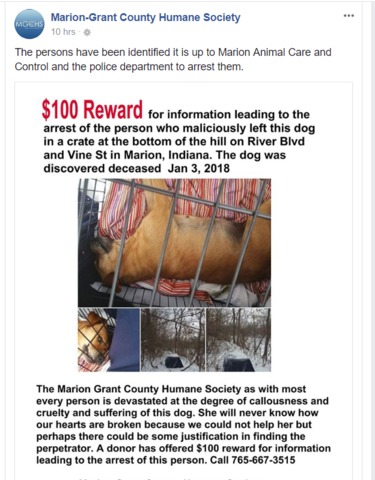