Copyright 2018 Scripps Media, Inc. All rights reserved. This material may not be published, broadcast, rewritten, or redistributed.
Kenney, Kara

INDIANAPOLIS -- Two candidates for Wayne Township trustee are sparring over a swapped billboard near 16th and Lafayette Road.

Current trustee Andy Harris, a Republican running for re-election, posted on Facebook that someone removed his billboard.

“I am very disappointed in the actions of my opponent and or his campaign,”  Harris said in a Facebook post. “My firefighters who endorsed and support me, spent their hard earned money on billboards, contracted until November 6 for my re-election. Only to have them torn down while being so blatant to screw his own billboard in its place, that is so disappointing.”

I wouldn’t have the authority to have someone’s take it down from a billboard.”

Harris provided his contract with Keyes Outdoor Advertising, which showed he is supposed to have a sign at that location until November 6.

A representative with Keyes Outdoor Advertising told RTV6 they did not remove the sign.

“We are getting his signs reprinted and reinstalled and hopefully they don’t get taken again,” Jeff Keyes, owner of Keyes Outdoor Advertising, said. “This is the first in 33 years and I’ve never had this happen. You would have to have a ladder to remove that billboard.”

Harris filed a police report about the $2,000 in damage.

Jones said he’s also had to deal with his own campaign signs going missing on Washington Street.

“I don’t operate that way,” Jones said. “His accusations are -- pure and simple -- false. I thought I knew Andy as a person, and it’s unfortunate he wants to conduct himself in this manner to win a trustee election.”

RTV6 has not been able to reach the property owner.

Scott Williams, Vice President with the Indianapolis Professional Firefighters IAFF Local 4166, said the property owner told him he removed the sign because the company did not have permission to use his building.

"We as a Union believe strongly in free, fair and open elections and also that when accusations are made that later turn out to be wrong they should be corrected," said Williams.

On Thursday, Timothy Logan, the owner of the building at 1610 Lafayette Road, released a statement to RTV6:

"Billboards were placed on my property with a political advertisement without my consultation or expression of permission.

The Andy Harris campaign did not request permission from me, and neither did the company that hung the billboards, Key Advertising.

"The Andy Harris campaign is alleging that Chuck Jones orchestrated the removal of these unauthorized signs. He did not. I was never contacted about the Harris Campaign’s signs, they were explicitly hung without my permission, and I removed them independently."

Jones provided RTV6 with the following statement on Thursday: 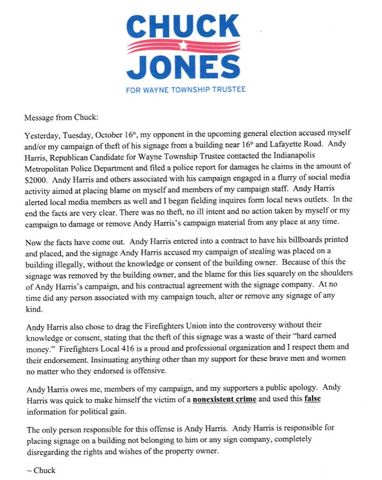