Church groups had gathered for prayers and singing 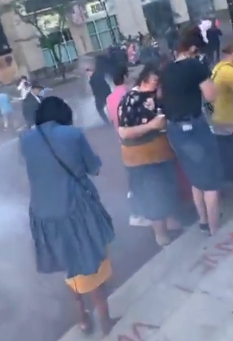 INDIANAPOLIS — Lydia Watson says she felt "heat in her chest" after tear gas fired by Indianapolis police was blown into her group's peaceful protest on Monument Circle Sunday.

Watson and about 50 members from her church, Liberty Tabernacle, along with other congregations were at Monument Circle Sunday evening to sing, pray and hear from inspirational speakers reacting to the death of George Floyd, at the hands of police, in Minneapolis last week.

But nearby, according to Indianapolis Police Chief Randal Taylor, IMPD officers found themselves surrounded as they tried to arrest a man who was allegedly trying to spray paint the Soldiers and Sailors Monument. Officers used tear gas to break up the group, and the gas was spread by the wind into Watson's prayer service.

"It dropped (a tear gas cannister) in front of a lady in a wheelchair," said Watson. "I saw it drop and I tried to move her out of the way and that's when it started to go everywhere."

Watson feels the tear gas use by police was excessive. "We've never been anywhere where something like that could have popped up," she said. "So, the way that it hit us, it was somewhat paralyzing for me personally. My mind was to make sure things were secure and people were helped. As more gas came I felt like paralyzed because I couldn't see, because I was having trouble breathing and felt like I couldn't run."

"My sincere apologies for anyone who was in this peaceful demonstration downtown that was impacted by the tear gas," said Chief Taylor at a Monday news conference.

Watson said the church accepts the apology. "We though we would be able to come down and pray and sing our songs. We already knew about the curfew restrictions so we were going to be out of there by 7:45."

Instead, members of the peaceful group found themselves fleeing tear gas.