How do you pick the biggest story from a year like 2015?

It was a year when the eyes of the nation turned to Indiana over and over. The attention wasn't always wanted.

The country sought inspiration from the unbelievable strength of Lauren Hill, a young Lawrenceburg graduate battling against time and an incurable disease to live her dream of playing college basketball.

It also watched as the Hoosier state became a microcosm of the challenges of balancing individuals' deeply held religious beliefs with the rights of LGBT citizens.

And, once, the country watched as a Carroll County farmer jumped into a hot tub on a freezing winter's day to save a newborn calf's life.

So what was the biggest story of this year? We didn't try to pick one. We picked 10: 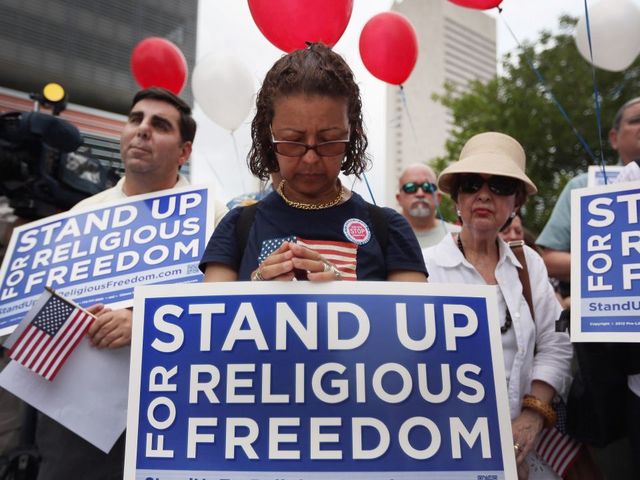 No story garnered as much national attention for Indiana this year as coverage of the state's Religious Freedom Restoration act. Unfortunately, much of that attention was fiercely negative.

The law, passed with wide majorities in the Indiana House and Senate and signed by Gov. Mike Pence, provides Hoosiers with a strengthened legal defense in the case they feel local or state laws are infringing upon their religious rights.

Critics, however, painted the law as a license for discrimination – particularly against gay and lesbian Hoosiers. Many saw RFRA as a reaction to a federal appeals court decision throwing out the state's ban on gay marriage.

Gov. Pence appeared in a much-lampooned interview on ABC's "This Week with George Stephanopoulos" to defend the law. Meanwhile, in Indiana, the law's supporters – among them a number of influential religious conservative lobbyists – remained much less vocal than its critics.

RELATED | Where are the supporters of RFRA? Silent out of fear of 'bullying' | Mystery surrounds attendees at SB 101 signing

The issue finally quieted down in April, when Pence signed a "fix" adding protections for gender identity and sexual orientation into the law. The debate promises to continue into 2016, however, as a lawsuit filed this month on behalf of two conservative groups challenges local anti-discrimination ordinances in Indianapolis and Carmel, as well as the RFRA "fix." More than two years after an explosion ripped apart a house on Indianapolis' south side, leaving dozens of homes uninhabitable and killing a young married couple, the man accused of masterminding the blast set foot in a St. Joseph County court room.

Prosecutors told a South Bend jury that 46-year-old Mark Leonard had conspired with his then-girlfriend, Monserrate Shirley, to blow up her house in the Richmond Hill neighborhood in November 2012. The pair was hoping to collect more than $300,000 worth of insurance payments.

RELATED | Timeline of events  | Gallery: The Richmond Hill Explosion  | Where were you at 11:11 PM?

Leonard faced 53 counts – including four counts of murder for the deaths of Dion and Jennifer Longworth. At six weeks long, his trial was the longest in Indiana history.

After spending the majority of their summer listening to days' worth of testimony and seeing thousands of pieces of evidence, jurors deliberated for just four hours before finding Leonard guilty of all 53 counts.

In August he was sentenced to two consecutive life terms in prison without parole, plus 75 years.

Three defendants in the case remain waiting for their day in court. The next up, Leonard's brother Bob, is scheduled to begin his trial on Jan. 19. It was the question that gripped Indianapolis for two weeks. The young mother's murder in her own home ignited the fears of a city in the midst of one of its deadliest years ever. The fact that the murder seemed to be a random act only heightened interest in the case – which spread beyond Indianapolis and across the country.

After nearly two weeks of "working without sleep," IMPD detectives arrested 18-year-old Larry Taylor on charges of murder in Blackburn's death. Two other suspects, Jalen Watson and Diano Gordon, also face charges in connection with her death and the alleged spree of burglaries that preceded it.

RELATED | WATCH: Last videos of the Blackburns' selflessness |Pastor speaks out for first time about slain wife | Teen: Amanda Blackburn 'could have been me'

The Fall of Jared Fogle 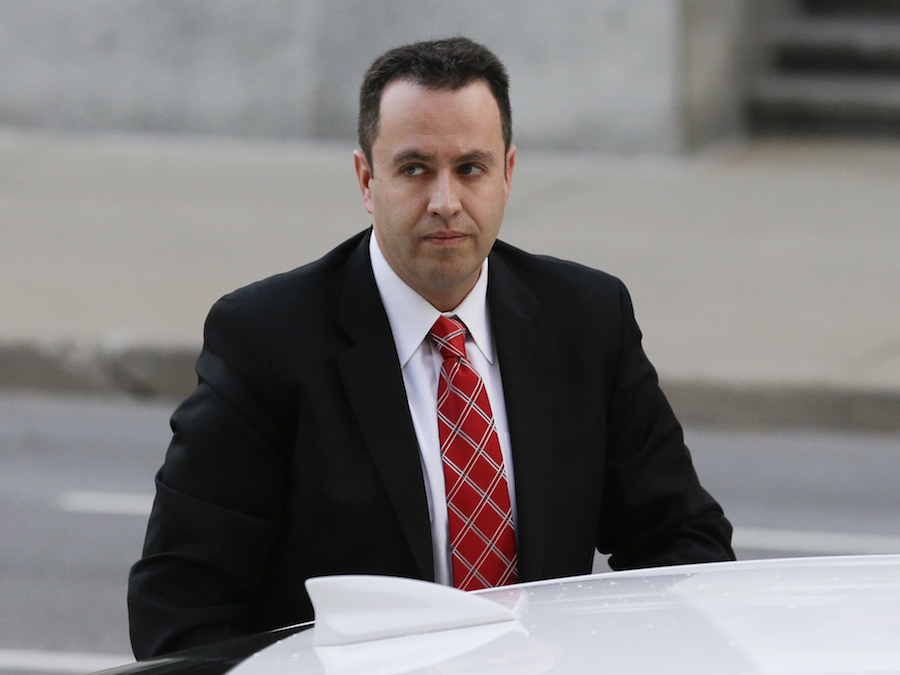 The fall from grace of former Subway spokesman Jared Fogle was as quick as it was unexpected.

RELATED | Jared Fogle sentenced to more than 15 years in prison | Jared Fogle speaks at his sentencing | Fogle's rise to fame before crimes came to light |Felons: Fogle plea deal a 'slap in the face'

In between, investigators uncovered the sordid details of Fogle and Taylor's relationship. Taylor said they would travel together and Fogle would ask him to arrange for sex with minors. Fogle would reportedly ask Taylor to provide him with, and produce, child pornography at his Indianapolis home.

Taylor was sentenced in December to 27 years in prison. Attorneys for his former boss have already appealed Fogle's sentence. Few people have every embodied a motto as much as Lauren Hill did hers: "Never give up."

The 19-year-old Lawrenceburg native was diagnosed with a rare disease known as DIPG – diffuse intrinsic pontine glioma – which causes aggressive and hard-to-treat tumors to grow in the brain.

Her prognosis was poor, but Hill never gave up. In fact, not only did she outlive doctors' most-optimistic projections – even getting to fulfill her dream of playing in a college basketball game – she raised thousands of dollars to help find a cure for her disease.

After her death, Hill was honored at the 2015 ESPY Awards, and was named a recipient of the NCAA's 2016 Inspiration Award. After two years of increasing homicide numbers, an apparent reprieve during the first half of 2015 was a welcome relief.

That all changed beginning in July.

A spike in homicides meant the city saw its 100th murder for the year earlier than any time in a decade. By the end of November, 2015 had exceeded the previous year's number of homicides – 135 – and was on track to become the deadliest year ever in Indy's recorded history.

Inside the city's growing homicide number were individual stories of pain and loss. Stories like the March quadruple murder of family members Tiara Turner, Davon Whitlock, Terrie Betties and Sherry Taylor. Stories like the seemingly random drive-by shooting of 10-year-old Deshaun Swanson. Unfortunately, all of those homicides remain unsolved.

If 2015 does end as the city's deadliest year ever, it will present a clear objective to former public safety director Troy Riggs, who will replace IMPD Chief Rick Hite at the start of the year. When the 2015 legislative session began, Gov. Mike Pence declared it the "Year of Education." In at least one way, he was right: His fellow Republicans in the Statehouse spent much of the session debating what to do with Superintendent of Public Instruction Glenda Ritz.

Ritz, a Democrat, won a surprise victory in 2012 over former Supt. Tony Bennett. Her relationship with the State Board of Education – Democrats and Republicans alike – as well as the GOP establishment quickly deteriorated to the point of her walking out of meetings.

The animosity came to a head at the end of the session in April, when lawmakers approved a bill removing the superintendent of public instruction as the automatic chair of the SBOE starting after the 2016 election.

In response, Ritz launched a brief campaign for governor – though she quickly dropped out of the race. She's now running as a ticket with Democratic gubernatorial candidate John Gregg. Southeastern Indiana found itself the epicenter of one of the worst HIV outbreaks in United States history this year.

More than 180 people tested positive for the virus – most of them in Scott County – with health officials saying the outbreak likely stemmed from needle sharing and intravenous use of prescription painkillers.

The outbreak grew bad enough that Gov. Mike Pence declared a health emergency. Indiana eventually approved its first-ever needle exchange programs in response to the outbreak, as well as reports of spikes of Hepatitis C and HIV cases elsewhere in the state. The troubled Wildcat Creek Bridge on I-65 was perhaps the most high-profile problem for INDOT in 2015, but it was far from the only one.

The bridge was closed multiple times over the summer due to "unusual movement" of the support piers. The resulting closures forced a detour to roads not built for such high traffic – and contributed, according to an emotional plea by the Boone County sheriff, to at least one fatal crash.

In September, Call 6 Investigates learned INDOT was investigating nearly 200 road projects over concerns they could fall apart 10 years early. One of the contractors being investigated, Brooks Construction, told the state it would not repay more than $5 million over asphalt issues.

Democrats jumped on the issue in campaign ads targeted at Gov. Mike Pence. The governor, in turn, announced a plan for an additional $1 billion in funding for roads and bridges.

The year will end with at least one more incident of traffic woes on I-65 in Tippecanoe County. In mid-December, a hole opened up near the Lauramie Creek Bridge, forcing more lane closures.

RELATED | Hole opens in I-65 bridge in Tippecanoe County A lot of things happened this year … and none of them compare to the reach of the Hot Tub Cow.

In March, a Carroll County farmer discovered a newborn calf lying near-death in a snowbank.  Thinking fast, the farmer, Dean Gangwer, grabbed the cow and jumped into his hot tub with it.

The rest, as they say, is history. Our post about the calf – named Leroy – was seen by more than 3 million people on Facebook alone. National news outlets picked up the story.

The best part of the story? The calf became so special to people, and to Gangwer, that Leroy will likely get to spend the rest of his days on his Carroll County farm – just not in the hot tub.