Why does the U.S. have more COVID-19 cases than any other country right now?

Why does the U.S. have more COVID-19 cases than any other country right now? 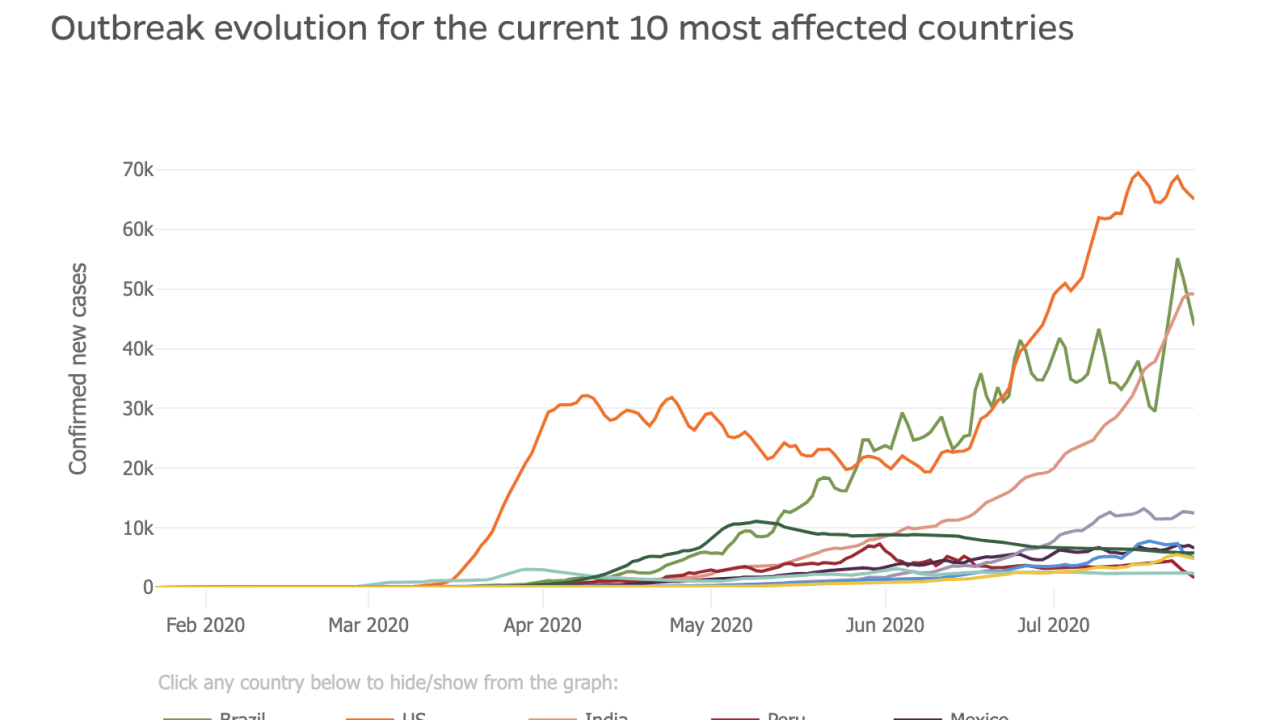 On Johns Hopkins University's graph of countries' daily confirmed COVID-19 cases, the U.S. is currently at the top.

“The United States does have a tremendous outbreak that is the world’s worse currently,” said Dr. Amesh Adalja, a senior scholar at Johns Hopkins Center for Health Security and a practicing Infectious Disease Critical Care and Emergency Medicine Physician.

Dr. Adalja says parts of the northeast have the virus largely under control, but other states--primarily in the south and southwest--have an increase in the number of new cases, an increase in the percent of positive tests, and reports of hospitals being under pressure for capacity.

He says the surge is related to multiple factors, but the primary one is social interaction.

“Many states lifted their stay-at-home orders, and when they did that, a lot of individuals thought this was a green light that things were safe, that this virus was contained, that the pandemic was largely over. And that wasn’t the case," Dr. Adalja said. "The virus established itself in the human population and is not going to go anywhere until there is a vaccine.”

Dr. Adalja says any amount of social interaction will be taken advantage of by a virus like this, especially if people aren’t wearing masks. Studies show a growing number of people can get infected and spread the virus without showing any symptoms. But he says the key to preventing more outbreaks is contact tracing.

“There’s no way that we can move forward unless we determine where these undetected chains of transmission are and halt that, and you can only do that with robust contact tracing,” Dr. Adalja said.

Other countries in Asia and Europe have had effective efforts in contact tracing. So the question is, why does the U.S. fall short? Experts say there are several reasons.

Dr. Sandy Johnson directs the Global Health Affairs program at the Josef Korbel School of International Studies at the University of Denver. He says the U.S. has a fairly complex political system.

Even if one area has done a good job at controlling the spread of the virus, Dr. Johnson explains a neighboring area may not have followed the same guidelines. As people start to travel, so does the virus, and those eager to believe the virus doesn’t pose a major threat only add to the fire. We’ve seen that in another country that isn’t too far behind the U.S. in its increase in cases.

“The biggest similarity with Brazil is that there was an evasion from the federal government in Brazil about the danger of this virus which is put a complacency into the public. The same thing happened to us in January, February and March and is still really occurring in many parts of the United States,” Dr. Adalja said.

Dr. Adalja and Dr. Johnson agree there has been a lack of clear and consistent communication in the U.S. Opposite of that, Dr. Johnson says Germany has been successful in keeping its numbers down, due in part to Chancellor Angela Merkel’s communication approach.

“She was speaking to the public. She was talking to her health and science advisors and she was sharing the science with the public. And from day one, she was very clear that there were hard times ahead,” Dr. Johnson said.

However, it’s not just up to national leaders and policymakers. Dr. Johnson says the population of a country must also have the willingness to look at and rely on science.

“While I would say by and large people are doing incredibly well in this country and taking collective action to take care of each other and are eager for scientific information, we’ve also seen these little clusters that are simply plugging their ears and going ‘la la la la la la’,” Dr. Johnson said.

Both doctors say what we can do as citizens does make a difference. It’s important to realize many people are making smart decisions for the greater good instead of only thinking about themselves.

“Think about what happened in early March and how many people almost overnight went into lockdown, and were taking action to take care of each other,” Dr. Johnson said.