Rubio takes the offensive against Trump 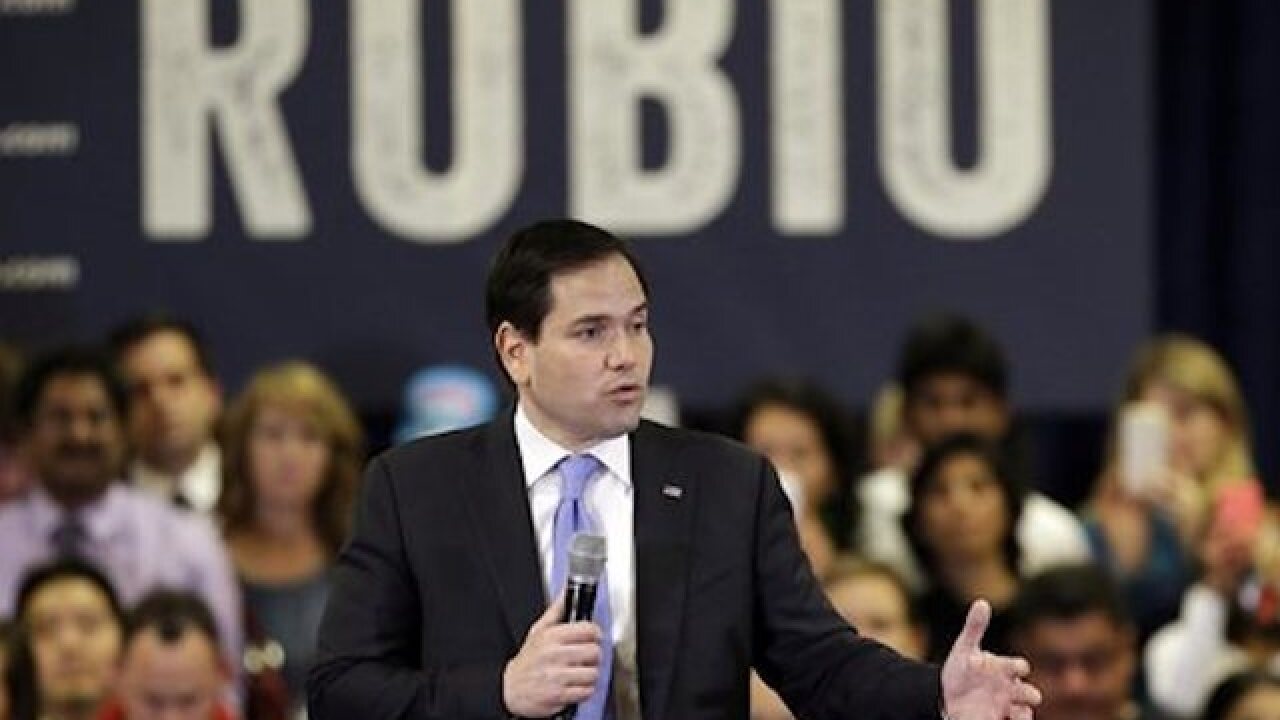 Copyright Associated Press
Pat Sullivan
<p>In this Feb. 24, 2016 photo, Republican presidential candidate, Sen. Marco Rubio, R-Fla., speaks at a rally in Houston. With a growing sense of urgency, the young Florida senator is now simultaneously trying to rally his partyís leading voices behind him and tear down his partyís overwhelming front-runner before itís too late. (AP Photo/Pat Sullivan)</p>

KENNESAW, Georgia (AP) — A flood of mainstream Republican officials and donors have lined up behind Marco Rubio in the week since former Florida Gov. Jeb Bush suspended his campaign for president.

And yet Rubio's team concedes that neither the influx of support, nor the conversion of many of Bush's wealthy donors, is enough to stop Donald Trump.

Instead of riding the wave of new support alone, Rubio has been forced to speed up plans for an all-out assault on the billionaire businessman's character.

Rubio had hoped to wait until the chaotic Republican nominating campaign had shrunk to a two-man race. But with a growing sense of urgency among GOP stalwarts to settle on a Trump alternative, the young Florida senator is trying to simultaneously slow Trump and cast himself the savior of the party's future.

"I will never quit. I will never stop until we keep a con man from taking over the party of Reagan and the conservative movement," Rubio thundered at a rally with 2,000 people in Oklahoma City on Friday.

It is a delicate balance.

Rubio, a 44-year-old first-term U.S. senator, is trying to project leadership in the party while also going after Trump using his own game, marked by mockery and uncanny aim for his opponent's vulnerabilities.

"Rubio looked around and thought, 'Well, I might not like it, but that's what the media is covering and that's what people are responding to.'"

But Rubio is quickly getting a feel for what he began during Thursday's debate, launching a direct challenge to Trump's appeal to working class voters.

In recent days, Rubio has dished about Trump's on-stage perspiration and alluded, jokingly, that Trump may have wet his pants. He's also taken to referring to the billionaire businessman as a "con artist" dozens of times a day while campaigning.

"It's amazing to me. A guy with the worst spray tan in America is attacking me for putting on makeup," Rubio charged as he campaigned in Georgia on Saturday. "Donald Trump likes to sue people. He should sue whoever did that to his face."

But make no mistake: Rubio's new tack is a fight for survival.

He trails Trump in virtually all of the 11 states holding nominating contests on March 1, known as Super Tuesday. The Florida senator has finished in no better than second place in the first four primary contests. Trump has won three out of four. And Texas Sen. Ted Cruz remains a top-tier contender, even after finishing in third place in the last three contests.

Given Trump's momentum, Rubio's team says publicly the senator's best chance for the nomination might be a contested national convention in July. That could happen only if Rubio prevents Trump from accumulating the majority of delegates in the months-long primary season that extends through June.

Some Florida-based donors, as well as top donors and fundraisers in Washington, D.C., Chicago and elsewhere were ready to join Rubio's team immediately after Bush left the race.

"There are a number of us, now that Gov. Bush is out of the race, who were very impressed with his debate Thursday, and see him as the one to take down Trump," said Chicago investor Craig Duchossois, who shifted from Bush to Rubio. "He showed he's not going to take any crap from him."

In the past two weeks, Rubio has also won the backing of four governors and 20 members of Congress, more than all of his Republican rivals combined.

Rubio had hoped to forestall a one-on-one brawl with Trump until there were only two. Cruz, Ohio Gov. John Kasich and retired neurosurgeon Ben Carson remain in the race, although none have the level of support from as many governors and members of Congress as Rubio.

In a year of the outsider, however, it's unclear how much that will boost his momentum.

And in the meantime, Rubio's assault on Trump's character continues.

Audiences in Super Tuesday states Oklahoma, Georgia and Alabama ate up the tough talk as he whipped through Southern states.

"It's about time he take his gloves off and start fighting," said Gary Baker from Okmulgee, Oklahoma. "I think he should have started punching sooner."

"The Rubio campaign needs to set-up a contrast on Trump, equate Trump to the culture of corruption Americans hate — where the rich get richer and middle class pays the price," Strimple said.

Rubio says there's time, but none to waste.

"If you sense a sense of urgency, it's not just about winning," Rubio said. "It's about the idea that the party of Reagan and the conservative movement could fall into the hands of a con man, who's pulling the ultimate con job on the American people."