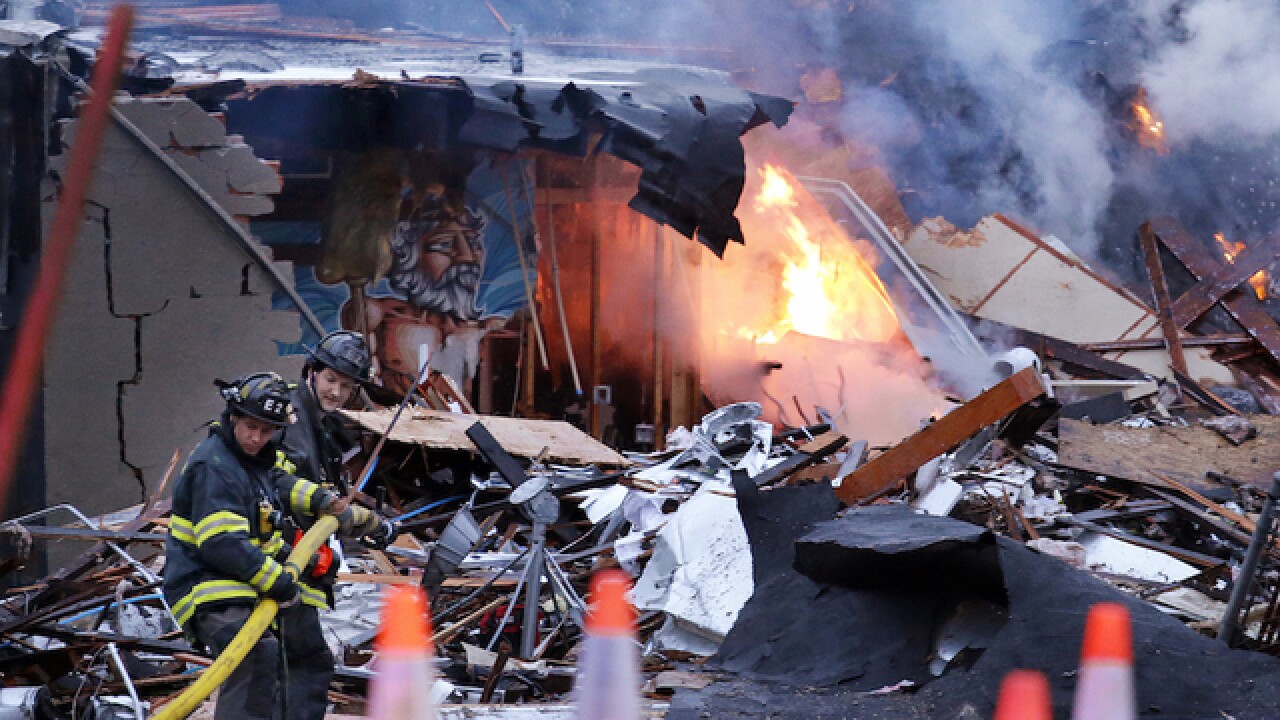 Elaine Thompson
<p>Firefighters move a hose into position as flames burn in the rubble left from an early morning explosion Wednesday, March 9, 2016, in Seattle. The explosion heavily damaged buildings and injured multiple firefighters.</p>

Crews were responding to reports of a natural gas leak when the explosion happened along the main thoroughfare of the city's Greenwood neighborhood, just north of downtown, Seattle Fire Department spokeswoman Corey Orvold said.

As the neighborhood hummed to life Wednesday morning, crews were still dousing an active flame with foam. Residents were checking out the damage and the rubble and glass that littered the streets was being swept up. Employees from one cafe damaged in the blast were pouring coffee for firefighters.

Among the businesses damaged or destroyed was Neptune Coffee, Mr. Gyro and a bike shop called G&O Family Cyclery.

"I arrived pretty soon after the massive fire trucks, and at that point, there were tons of flames leaping over what was already the rubble of Neptune coffee, which as you can see now totaled, gone," said bike shop owner Davey Oil. "We work pretty hard on our business and we really love the neighborhood. Our block is a pretty close-knit block and this is pretty terrible."

Chocolati Cafe manager Darla Weidman said she's relieved it happened overnight instead of 11 a.m. because they sometimes have a packed house.

Orvold said residents of an apartment building and another nearby residential structure were evacuated following the 1:45 a.m. blast.

There was no word of any other injuries or anyone missing. But Orvold said dogs were being used to go through the rubble just in case.

She said five were treated and released early Wednesday and four others were in being discharged.

"We didn't have anybody with burns, nothing life-threatening, nothing major" said Gregg, adding that some firefighters were sent to the hospital to be checked out because the blast was so powerful it pushed them back.

Gregg said eight men and one woman were treated.

A man who lives nearby told KOMO-TV that the blast shook him out of bed.

"Thought it was an earthquake; way too loud to be a gunshot. So I got out of bed, checked on the family, and my family's good. So I went outside and saw smoke," Josh Coolbaugh said.

Crews worked to shut off natural gas in neighborhood. Puget Sound Energy spokeswoman Christina Donegan said a survey team will then move in.

Donegan said their focus will be to determine if there was an issue with gas to the building or something inside the building.