Over the top: Trump sews up delegates 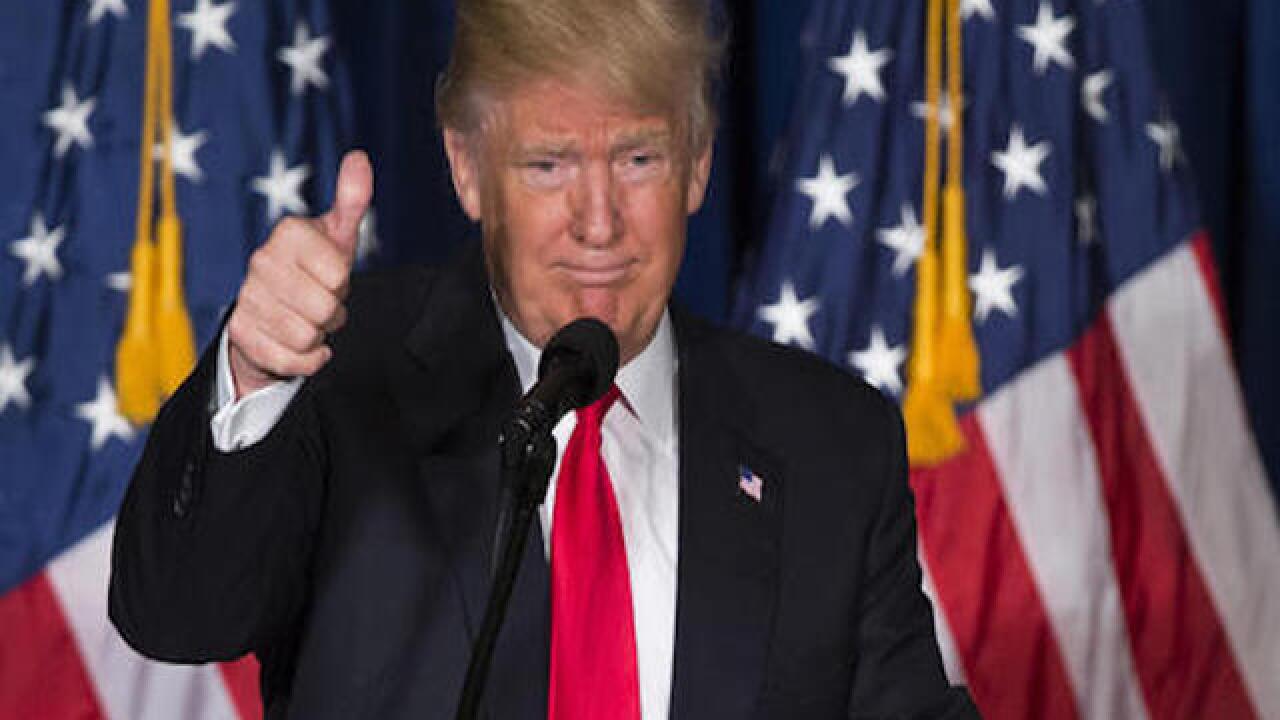 Copyright Associated Press
Evan Vucci
<p>In this Wednesday, April 27, 2016 file photo, Republican presidential candidate Donald Trump gives a thumbs up after giving a foreign policy speech at the Mayflower Hotel in Washington. Trump is courting Golden State voters who could put him over the top in GOP convention delegates. The presidential candidate will kick off his California campaign with a rally in Costa Mesa Thursday night before he addresses the state's Republican convention on Friday, his campaign announced. (AP Photo/Evan Vucci)</p>

By: Associated Press
Posted at 11:32 PM, May 26, 2016
BISMARCK, N.D. (AP) — Triumphantly armed with a majority of his party's delegates, Republican Donald Trump unleashed a broadside attack Thursday on Hillary Clinton's prescriptions for energy, guns, the economy and international affairs, shifting abruptly toward the general election with his likely Democratic opponent locked in a divisive primary contest.
The New York billionaire shrugged off signs of discord in his party hours after sewing up the number of delegates needed to clinch the GOP nomination, a feat that completed an unlikely rise that has upended the political landscape and set the stage for a bitter fall campaign.
"Here I am watching Hillary fight, and she can't close the deal," Trump crowed during an appearance in North Dakota. "We've had tremendous support from almost everybody."
Trump's good news was tempered by ongoing internal problems. Those include the sudden departure of his political director and continuing resistance by many Republican leaders, including House Speaker Paul Ryan and New Mexico Gov. Susana Martinez, to declaring their support for his outsider candidacy.
At the same time, Clinton faced fresh questions about her use of a private email server while secretary of state, even as she fought to pivot toward Trump, who she warned would take the country "backward on every issue and value we care about."
The State Department's inspector general released a report a day earlier concluding that Clinton did not seek legal approval for her private email server, guaranteeing the issue will continue nagging her campaign for a second summer. She insisted Thursday that she had done nothing wrong.
"It was allowed. And the rules have been clarified since I left about the practice. Having said that, I have said many times, it was a mistake. And, if I could go back, I would do it differently," Clinton said, according to an interview transcript provided by ABC News.
Campaigning before union workers in Las Vegas, she decried Trump's anti-union comments and his proposal to deport millions of immigrants who are in the U.S. illegally. She said he is an "unqualified loose cannon" who should never be president.
Complicating her election challenge, Clinton's Democratic rival Bernie Sanders embraced the possibility of a one-on-one debate with Trump. The Republican said he'd "love to debate Bernie," but would want the debate to raise at least $10 million for charity.
"The problem with debating Bernie," Trump noted, "he's going to lose."
Just 75 delegates short of her own delegate majority, Clinton remains on a path to clinch the Democratic presidential nomination, according to an Associated Press count. But Trump got there first.
The New York businessman sealed the majority by claiming a small number of the party's unbound delegates who told the AP they would support him at the national convention in July. Among them was Oklahoma GOP chairwoman Pam Pollard.
"I think he has touched a part of our electorate that doesn't like where our country is," Pollard said. "I have no problem supporting Mr. Trump."
It takes 1,237 delegates to win the Republican nomination. Trump has reached 1,239 and will easily pad his total in primary elections on June 7.
Many on the right have been slow to warm to Trump, wary of his conservative bona fides. Others worry about his crass personality and the lewd comments he's made about women.
Trump said during a press conference Thursday that he would "absolutely" end his habit of attacking fellow Republicans now that the nomination is effectively his. But that truce appeared to be short-lived.
Speaking later at a rally in Billings, Montana, Trump said 2012 GOP nominee Mitt Romney, who has refused to endorse him, had "failed so badly." His campaign also released a celebratory Instagram video that features a montage of former rivals, including Jeb Bush and Ted Cruz, saying he would never be the party's nominee.
Still, millions of grass-roots activists, many of them outsiders to the political process, have embraced Trump as a plain-speaking populist.
Steve House, chairman of the Colorado Republican Party and an unbound delegate who confirmed his support of Trump to the AP, said he likes the billionaire's background as a businessman.
"Leadership is leadership," House said. "If he can surround himself with the political talent, I think he will be fine."
Still, Trump's pivotal moment comes amid a new sign of internal problems.
Hours before clinching the nomination, he announced the departure of political director Rick Wiley, who was leading the campaign's push to hire staff in key battleground states. In a statement, Trump's campaign said Wiley had been hired only until the candidate's organization "was running full steam."
His hiring about six weeks ago was seen as a sign that party veterans were embracing Trump's campaign. The White House contender ignored questions about internal problems on Thursday and instead took aim at Clinton.
He told a Bismarck audience that Clinton has "declared war on the American worker," that she's "going to abolish your right to own guns," and that she created a foreign policy legacy "of total chaos."
He said, "The choice in November is a choice between a Clinton agenda that puts donors first or an agenda that puts America first: my agenda."
Trump also entered a new phase on the fundraising front. Having bashed donors for much of the past year, he hosted his first major campaign fundraiser the night before: a $25,000-per-ticket dinner in Los Angeles.
At the Billings rally, Trump offered new specifics on his general election strategy.
"What I'm going to do is I want to focus on 15-or-so states," he said, that could go "either way."
Among those he mentioned: the Democratic bastions of California and New York, which he insists he can put into play.
Copyright 2016 The Associated Press. All rights reserved. This material may not be published, broadcast, rewritten or redistributed.