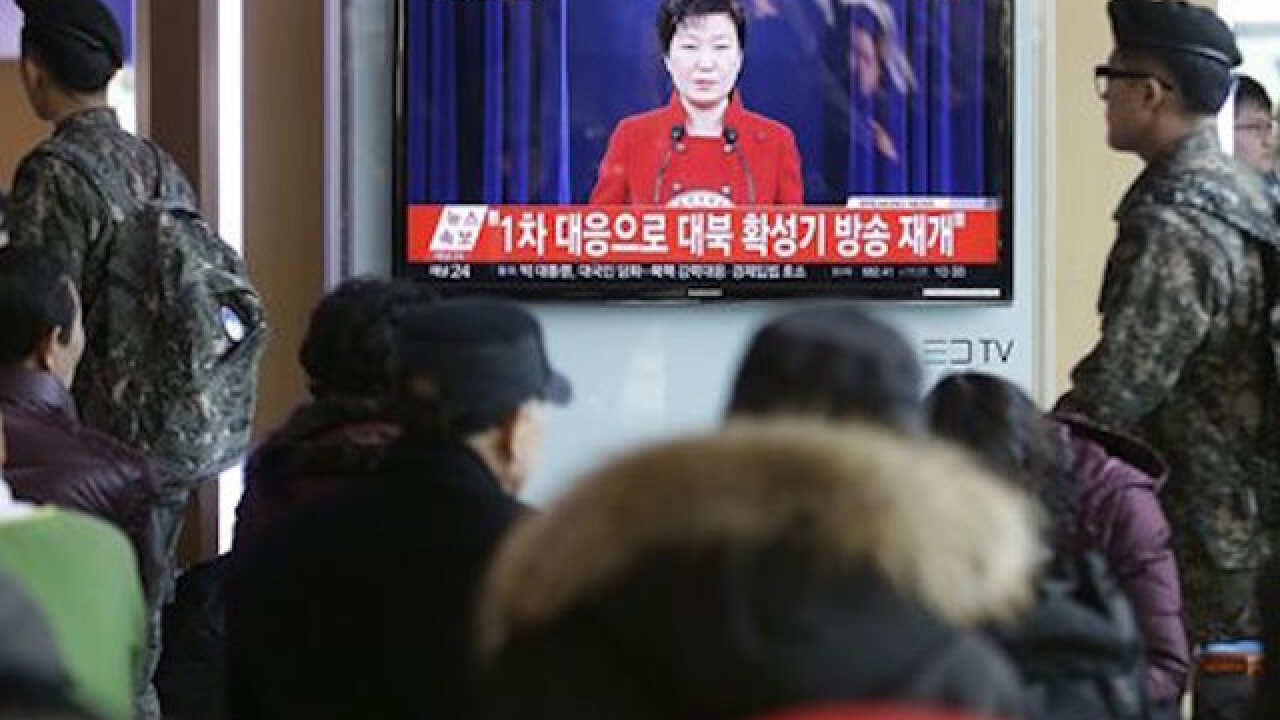 Park Geun-hye's comments came as Seoul said North Korea had flown leaflets across the border describing her and her government as "mad dogs" as Cold War-style propaganda warfare continued between the rivals.

South Korea, the United States and others are pushing hard to impose fresh sanctions and other punitive measures on the North for what Pyongyang said was a hydrogen bomb test one week ago.

There is widespread skepticism over the H-bomb claim, but whatever the North detonated underground will likely push the country closer toward a fully functional nuclear arsenal, which it still is not thought to have.

Diplomats at a U.N. Security Council emergency session last week pledged to swiftly pursue new sanctions. For current sanctions and any new penalties to work, better cooperation and stronger implementation from China, the North's diplomatic and economic protector and a veto-wielding permanent member of the Security Council, is seen as key.

On Wednesday, Park said in a nationally televised news conference that South Korea will push as hard as it can for strong sanctions that can force change in North Korea. But, she said, Chinese help is crucial.

"Holding the hands of someone in a difficult situation is the mark of the best partner," Park said, referring to China and South Korea's need to punish the North.

Beijing is seen as reluctant to clamp down on the North in part because of fears that a toppled government in Pyongyang would see millions of desperate North Koreans flooding across the border with China and a U.S.-backed South Korean government in control of the Korean Peninsula.

In the wake of the nuclear test a week ago, the two Koreas have settled into a Cold War-era standoff. Since Friday, South Korea has been blasting anti-Pyongyang propaganda from huge speakers along the border, and the North is using speakers of its own in an attempt to keep its soldiers from hearing the South Korean messages.

Park said South Korea will continue its loudspeaker campaign, calling it "the surest and most effective psychological warfare tool." Her military announced it has found hundreds of anti-Seoul leaflets near the western portion of the Koreas' border. The Defense Ministry believes those leaflets were floated over by the North's military.

Similar North Korea-sent propaganda leaflets were discovered on a South Korea border island between late 2013 and early 2014. Such leafleting, however, by the North is still rare.

The leaflets found earlier Wednesday included such messages as "Let's knock down the Park Geun-hye group like we do mad dogs" and "The U.S. must immediately stop its anachronistic hostile policy on North Korea."

It may take weeks or longer to confirm or refute the North's claim that it successfully tested a hydrogen bomb, which would mark a major and unanticipated advance for its still-limited nuclear arsenal.

The test has provoked global outrage, but it has also been a gift of sorts for Park, who has faced several mass protests condemning her leadership in recent weeks.