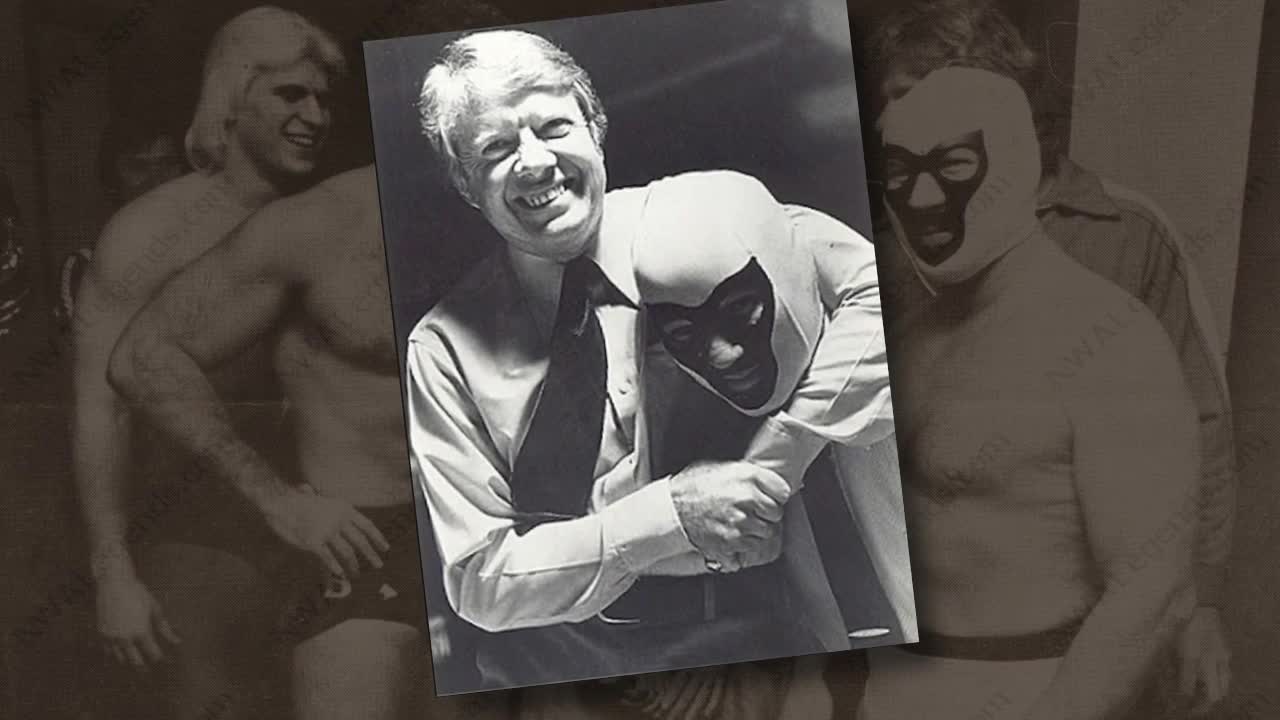 Before McMahon essentially nationalized pro wrestling in the 1980s, wrestling was a hodgepodge of territories – Dick the Bruiser famously ran the territory in Indianapolis beginning in the 1960s, and his wrestling shows aired on WRTV for many years. Georgia was another well-known territory, its popularity boosted immensely by Turner beaming his station far beyond Atlanta. The most popular wrestler in the Georgia territory, by far, was the masked hero – Mr. Wrestling II.

It was one of the worst-looking “Stone Cold Stunners” of all time, and it was probably because the future President of the United States had no idea how to take one. But there was Donald Trump, left lying on the mat by Steve Austin following Trump’s involvement in the main event of 2007’s “Wrestlemania 23.” Eventually, wrestling – specifically the campaign cash of WWE mogul Vince McMahon and the strategy of his wife and Trump campaign executive Linda McMahon – would help get ‘The Donald’ to the White House. But decades earlier, another wrestler – one who probably could have won office himself if one could run while wearing a mask – helped a man of much humbler means win the Oval Office.

In 1976, another man who would eventually be a billionaire — Ted Turner — owned a tiny TV station in Atlanta, WTCG Channel 17. Early that year, Turner began sending his TV signal to cable TV systems in the South and eventually across the country – he would later call it his “Superstation.” Channel 17 ran a lot of old reruns – it was famously the longtime cable home of the Andy Griffith Show. It also broadcast the games of the Atlanta Braves and Hawks (both owned by Turner). But Channel 17’s highest-rated show was Georgia Championship Wrestling, airing every Saturday night (and sometimes on Sunday nights).

Before McMahon essentially nationalized pro wrestling in the 1980s, wrestling was a hodgepodge of territories – Dick the Bruiser famously ran the territory in Indianapolis beginning in the 1960s, and his wrestling shows aired on WRTV for many years. Georgia was another well-known territory, its popularity boosted immensely by Turner beaming his station far beyond Atlanta. The most popular wrestler in the Georgia territory, by far, was the masked hero – Mr. Wrestling II.

Wrestling II (or just “Two” to most Georgians) was so well known, he claimed he was the only man who could get away with wearing a mask inside a bank (he frequently did, as well as other public places). While he would occasionally compete in other territories, Georgia was Wrestling II’s home base. He would hold the top title in the territory – the Georgia Heavyweight Championship – 11 times, more than any other competitor. While in Georgia, Wrestling II was always a good guy, always playing by the rules – unless, of course, he needed to get even with the rule-breaking baddies.

At the same time, Wrestling II was the undisputed king of Atlanta, the former governor of Georgia was running for president. Jimmy Carter stunned the world of politics by coming from essentially nowhere to win the Democratic nomination, beating many other candidates who were more established nationally – among them, Indiana Senator Birch Bayh. Carter had stated on the record that Mr. Wrestling II was his favorite wrestler. No one is sure how much of the action Carter caught on Channel 17. But Carter’s mother was another story.

Lillian Carter – or Miss Lillian – was a fanatic for wrestling, to put it mildly. “The more brutal it is, the better I like it! You can go ahead and print that!,” she told a reporter for the National Enquirer. Why did a near-octogenarian love the grappling so much? “They’re all nice young men. They have good physiques and beautiful bodies.” In fact, politics is the reason Miss Lillian got into wrestling in the first place – she says she started going to matches in 1966, while campaigning for her son the first time he ran for governor. Lillian claimed she initially went just to shake hands with potential voters. But she was hooked. Miss Lillian’s favorite wrestler? “Wrestler Number Two! He wears a mask.”

That fandom led to one of the most famous photographs in wrestling history, and perhaps political history. Jimmy Carter with his customary toothy grin, applying a not-so-perfect side headlock to a smiling “Wrestler Number Two.” The picture landed in newspapers across the U.S. It probably also pushed more than a few people to pull the lever for the Democrat in November, and Carter would win the race over President Gerald Ford by a smaller margin than most remember – two percentage points in the popular vote, 297-to-240 in the Electoral College. Every single state in the South – many of which could now see Channel 17 and Wrestling II every week – went to Carter.

Carter would eventually nominate Georgia Championship Wrestling co-owner and promoter Jim Barnett to the National Council for the Arts – causing a minor scandal among “proper” arts people. He also invited Wrestling II to his inauguration in January of 1977. “Two” wanted to make the trip, but while he could go to a bank or a restaurant anywhere in Georgia wearing his trademark white mask with black trim, the Secret Service said he could not go to an inauguration while wearing it.

Wrestling II fought wars over that mask, frequently losing it to other masked competitors like The Assassin and The Superstar, before getting revenge by getting one of their masks. “My mask means everything to me,” he once said in a wrestling show interview that was only part-show. He would not go to Washington. Coincidence or not, the next four years would be more fruitful professionally for Wrestling II than they would be for Jimmy Carter.

The man behind the Wrestling II mask was Johnny Walker, a veteran wrestler long before he covered his face. In the early 1970s, Walker had mostly retired from wrestling and was running a gas station when the man running the Georgia territory at the time saw him and had an idea. Their top star, the masked “Mr. Wrestling” (Tim Woods), was leaving for another territory. Johnny could come in, put a mask on as Mr. Wrestling II, and take his place. Not only did he fill Mr. Wrestling’s boots, he essentially took over Atlanta, the rest of Georgia, a large part of the wrestling world – and he helped a fellow Georgian win the highest office in the land with a single photograph. Not bad for a gimmick launched next to a gas pump.

On Wednesday, his son says Johnny Walker died at the home he retired to in Hawaii. He was 85. He was never a ‘mogul’ with millions in cash like those featured in the current administration. But in our bicentennial year, the mask of Mr. Wrestling II helped bring championship gold to a grateful peanut farmer tag team partner.