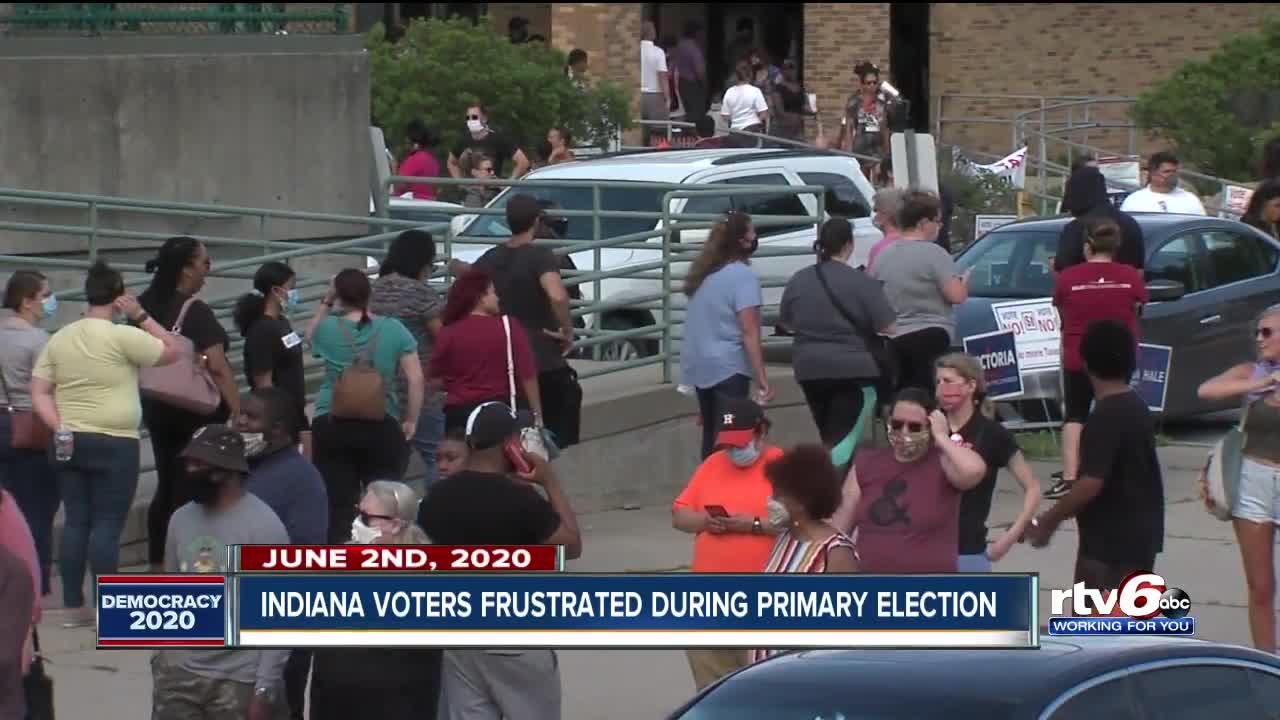 INDIANAPOLIS — There were election issues in Kentucky on Tuesday as voters in the state demanded the right to vote. The state cut polling places from the usual 3,700 to 170 because of the ongoing COVID-19 pandemic.

The issue isn't isolated to Kentucky. Many states shrank the number of polls for the primary, including Indiana. With 19 weeks to go, the changes are raising major concerns about November's general election when voter turnout could set records.

Indiana's primary election at the beginning of the month left a lot of people frustrated.

"I thought I could just come in and out and it would be in and out," another voter said.

Long wait times to vote in Marion County were because there were only 22 polling places this year when they are usually more than 200.

"We know that we're going to have double or triple the turnout in the fall so that's something we'll take into account," Brienne Delaney, director of elections for the Marion County Board of Elections, said.

While the government figures out what to do for the general election, organizations like the League of Women Voters here in Indianapolis are working to make sure anyone who wants to vote knows how to cast their ballot.

"You can not assume it's business as usual for the upcoming election or for the foreseeable future," Rhea Cain, president of the League of Women Voters of Indianapolis, said. "We have stressed that folks need to have an election plan put together before they go to the polls. It's something that we are actively working on to make it accessible to people."

That election plan should include knowing dates, according to Cain. Indiana voters have from now until Oct. 22 to request an absentee ballot for the general election.

League of Women Voters of Indianapolis is holding training sessions so that more people can help others figure out how to vote. They hope sharing information on voter registration and the process will make it easier in November and help more people exercise their right to vote whether that's in person or by mail.

With no end in sight to the COVID-19 pandemic, there's a push for the state to mail out applications for absentee ballots to all registered voters. WRTV reached out to the governor's office and they referred us back to comments Gov. Eric Holcomb made earlier this month saying it's too early to tell if that's something they'll do.

The Senate Democrats undeniably support giving all Hoosiers the option to vote by no-excuse absentee ballot in the November election. It's crucial that Hoosiers have this secure voting option in order for a safe election to occur. The Indiana Election Commission smartly instituted no-excuse absentee voting for the primary in order to keep residents safe while guaranteeing them their right to vote. Clearly, the idea had bipartisan support; over 500,000 Hoosiers requested an absentee ballot for the primary. The IEC has the ability to once again extend this option to everyone for the general election. This pandemic will still be around in the fall, and if we want to avoid long lines and mass-crowding, Hoosiers must have the choice to vote absentee. No one should have to decide between their health and their right to vote. We call on the IEC to quickly make the bipartisan decision to continue no-excuse absentee voting.