So what do Trump & Pence agree on? Not much 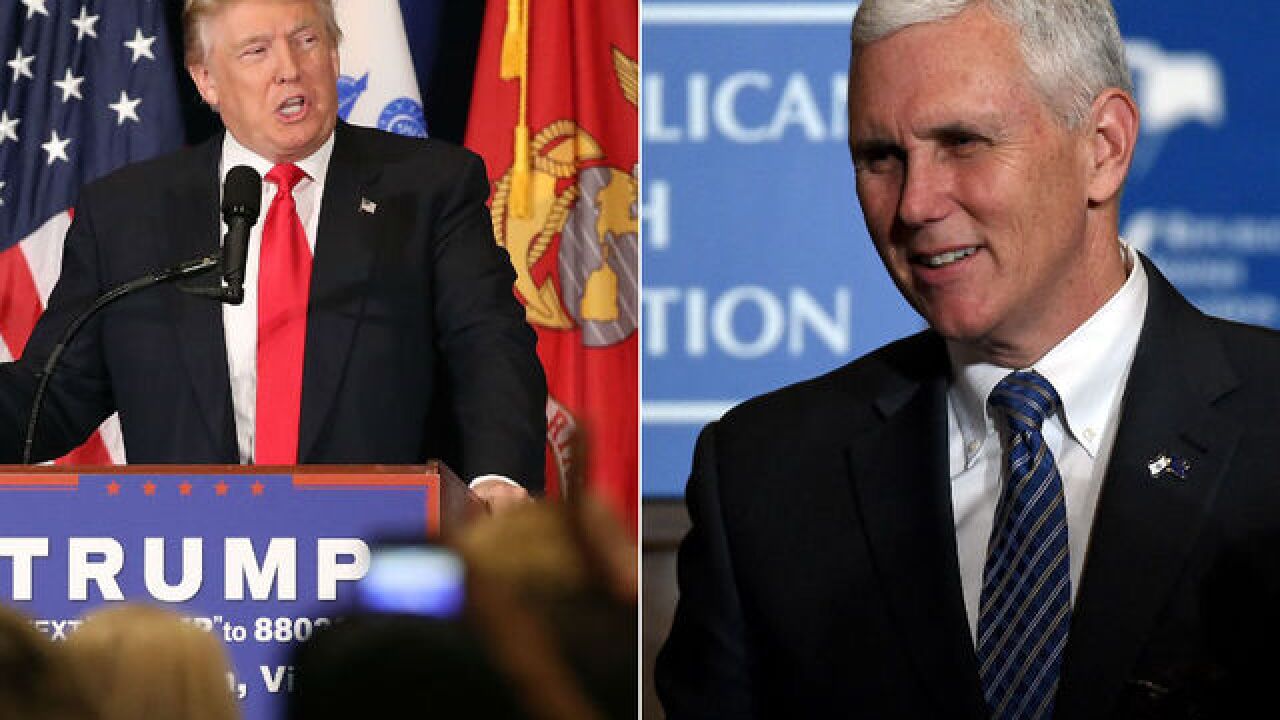 INDIANAPOLIS -- Gov. Mike Pence dodged a question Monday about whether he would be comfortable disagreeing with Donald Trump on the campaign trail – though if his past record is any indication, they'll have plenty to disagree about.

ABC News reported Thursday afternoon that Trump had offered, and Pence had accepted, a spot as his running mate to Indiana's governor. Before the report came out, U.S. Speaker of the House Paul Ryan praised Pence, saying he would be an excellent conservative choice for Trump's running mate.

#PENCEWATCH COVERAGE | Report: Trump to choose Pence as VP | Timeline: The governorship of Mike Pence | #PenceWatch Blog: Latest updates on VP choice | If Pence isn't in governor's race, who will be?

But, while a Trump-Pence ticket might help the presumptive Republican nominee soothe concerns from establishment conservatives, it opens more questions about how the candidate who has made trashing free trade agreements a central part of his campaign will mesh with a vice president who has been a staunch supporter of those same deals.

We looked at key areas where Trump and Pence agree – and disagree – on the issues. Take a look below:

Trump has repeatedly painted himself as a master dealmaker who will renegotiate America's international trade deals.

"I know free. I know fair. I know every form of trade known to mankind," Trump said at a rally in Westfield, Indiana, this week. "Here’s my definition of trade: My definition of trade is that I want to make great deals for the American people. You can call it whatever the hell you want."

But Pence, like most Republicans – at least prior to Trump's candidacy – has been a vocal proponent of free trade. According to OnTheIssues, a website  that tracks congressional voting records, as a congressman, Pence voted in favor of the Central America Free Trade Agreement (CAFTA), the U.S.-Australia Free Trade Agreement, the U.S.-Singapore Free Trade Agreement and a 2003 free trade agreement while Chile. He also voted against the Trade and Globalization Act of 2007, which would have provided more assistance to workers who lose their jobs due to globalization.

In 2013, Pence joined the governors of 13 other states in sending a letter to President Barack Obama urging them to make progress on the Trans-Pacific Partnership – a deal Trump has repeatedly vilified on the campaign trail.

Trade means jobs, but trade also means security. The time has come for all of us to urge the swift adoption of the Trans Pacific Partnership

Pence is staunchly anti-abortion. He has supported increasing abortion restrictions both while in Congress and as governor, including a contentious new law this year that's currently blocked from going into effect amid a lawsuit by the ACLU. Pence also directed $3.5 million in TANF funds last year to the anti-abortion organization Real Alternatives to "actively promote childbirth instead of abortion" at clinics around the state.

Trump's position on abortion is harder to pin down. As the Washington Post notes, it has changed multiple times over the years – even while on the campaign trail.

In a 1999 interview with Tim Russert on NBC, Trump described himself as "very pro-choice." In 2011, Trump told the Conservative Political Action Conference (CPAC) the he was "pro-life and against gun control." In April, Trump reportedly told CBS that abortion laws are set, "and I think we have to leave it that way."

In December, Trump called for a "total and complete shutdown of Muslims entering the United States" – a position he hasn't backed down from.

"Until we are able to determine and understand this problem and the dangerous threat it poses, our country cannot be the victims of horrendous attacks by people that believe only in jihad, and have no sense of reason or respect for human life," Trump said in a statement.

The proposal has received widespread condemnation from Democrats and Republicans alike, including Pence, who called it "offensive and unconstitutional."

Calls to ban Muslims from entering the U.S. are offensive and unconstitutional.

Despite their differing views on a total ban on Muslim immigration, Pence and Trump share common ground in their views on dealing with the wave of immigrants fleeing violence in Syria.

In 2015, Pence announced his intention to block Syrian refugees from resettling in Indiana, citing security concerns. A federal judge later blocked him from doing so, saying his efforts were unconstitutional and "utterly ineffective."

Trump reaffirmed his call Tuesday in Westfield to block people "that we have no idea where they're from."

Pence found himself as the face of the Indiana Religious Freedom Restoration Act passed in 2015 at the urging of prominent social conservative groups. The law brought national attention to the state – most of it negative – and cost Indianapolis an estimated $60 million in tourism revenue as conventions pulled out in protest.

Despite protestations by Pence, including a much-maligned appearance on "This Week" with George Stephanopoulos, many saw the law as legalizing discrimination against the LGBTQ community. It was eventually amended to specifically forbid its use in situations involving a person's sexual orientation or gender identity.

By contrast, social conservatives have criticized Trump for failing to take a strong enough stand on religious liberty. In an op-ed for National Review, Maggie Gallagher, of the conservative American Principles Project, lambasted Trump for being the only top GOP candidate to fail to commit to passing the First Amendment Defense Act – legislation designed to "protect gay-marriage dissidents from punishment by the federal government or its regulatory arms."

Gallagher notes that the LGBTQ Republican group the Log Cabin Republicans have hailed Trump as "one of the best, if not the best, pro-gay Republican candidates to ever run for president."

"He's a Mexican. We're building a wall between here and Mexico. The answer is, he is giving us very unfair rulings, rulings that people can't even believe," Trump said in an interview with CNN.

Pence also weighed in, saying "of course I think those comments are inappropriate."

"That being said," Pence added, "if I wanted to comment on everything that's said in a presidential election, I would have run for president. I'm focused on the state of Indiana."

One place where Trump and Pence seem to be in agreement is firearm laws.

Pence received an "A" rating from the NRA during his time in Congress. He voted in 2003 and 2005 to prohibit product misuse lawsuits against gun manufacturers and in 2011 to loosen restrictions on interstate gun purchases.

During his 2016 State of the State address, Pence pointed at that Indiana was one of the first states to allow National Guardsmen to carry firearms at recruiting stations.

"Hoosiers know firearms in the hands of law-abiding citizens – including our National Guard – makes our communities more safe, not less safe," Pence said. "Indiana will always defend the right to keep and bear arms."

The NRA announced its endorsement of Trump in May, saying "the Second Amendment is on the ballot this November."

On Tuesday, Trump told a crowd in Westfield that "we're going to save our Second Amendment," adding that it's "under siege."