California Gov. Jerry Brown declared a state of emergency after Northern California was shaken awake Sunday by its strongest earthquake in 25 years.

The South Napa Earthquake, which hit at about 3:20 a.m. local time, damaged historic buildings and hurt dozens of people, including a 13-year-old critically injured by a crumbling fireplace.

Its epicenter was located about six miles south-southwest of Napa, California, and 51 miles west-southwest of Sacramento, according to the U.S. Geological Survey. Officials have variously referred to the earthquake's magnitude as 6.0 and 6.1.

The earthquake was the largest one to shake the Bay Area since the 1989 6.9-magnitude Loma Prieta Earthquake. Dozens of aftershocks followed.

Officials were still assessing the damage late Sunday in hopes of getting a cost estimate they could submit for possible federal assistance. But the initial assessment found that dozens of homes and buildings in the region were unsafe to occupy, including an historic Napa County courthouse, where a 10-foot wide hole opened a view of the offices inside.

Queen of the Valley Medical Center in Napa reported treating 172 people in the emergency room, although hospital officials could not say how many of them were there for injuries suffered in the quake and how many for more routine injuries and illnesses, hospital CEO Walt Mickens said.

Twelve people were admitted for broken bones and other medical problems directly related to the earthquake, including an adult who remained in critical condition on Sunday night and a 13-year-old boy.

The teen was hit by flying debris from a collapsed fireplace and had to be airlifted to the children's hospital at the University of California Davis Medical Center for a neurological evaluation. He condition was listed as serious, hospital spokeswoman Phyllis Brown said.

While inspecting the shattered glass at her husband's storefront office in downtown Napa, Chris Malloy described calling for her two children in the dark as the quake rumbled under the family's home, tossing heavy pieces of furniture for several feet.

"It was shaking and I was crawling on my hands and knees in the dark, looking for them," the 45-year-old woman said, wearing flip flops on feet left bloodied from crawling through broken glass.

Pacific Gas and Electric spokesman Jeff Smith said an assessment found that about 70,000 customers lost power after the quake hit, but that number was down to around 2,200 by 11 p.m.

An earthquake early warning system currently being tested issued a 10-second warning before the quake struck, said Richard Allen, director of the University of California, Berkeley Seismological Laboratory. California is working to implement a statewide system, though Allen said funding has not been secured.

The timing of the quake was bad for business in Napa as well.

Vintner Richard Ward of Saintsbury Winery south of Napa watched Sunday afternoon as workers righted toppled barrels and rescued a 500-pound grape de-stemmer that the quake had thrown to the ground. 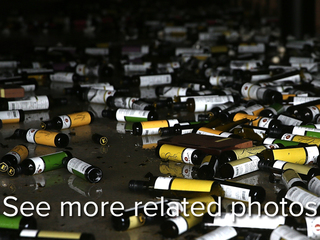 "That's what happens when you're a mile from the epicenter," said Ward, who lost 300 to 400 bottles in the winery's basement.

The grape harvest was supposed to start overnight Monday, but it would now be pushed off a few days, he said. Had the harvest started a day earlier, the quake could have caught the workers among the heavy barrels when it struck, Ward said.

Aftershocks were expected to continue for several weeks, though State Geologist John Parrish said they would decrease in magnitude and it was unlikely that there would be a large follow-up earthquake. Still, he warned people to be careful because buildings that were damaged by the quake were now more susceptible to collapse from aftershocks.

On Sunday night in Southern California, a small, magnitude-3.3 earthquake hit off the region's coast.

The U.S. Geological Survey says the temblor struck at 7:50 p.m. and was centered about 5 miles southwest of San Pedro and 6 miles southeast of Rancho PalosVerdes. There were no initial reports of damages, police said.