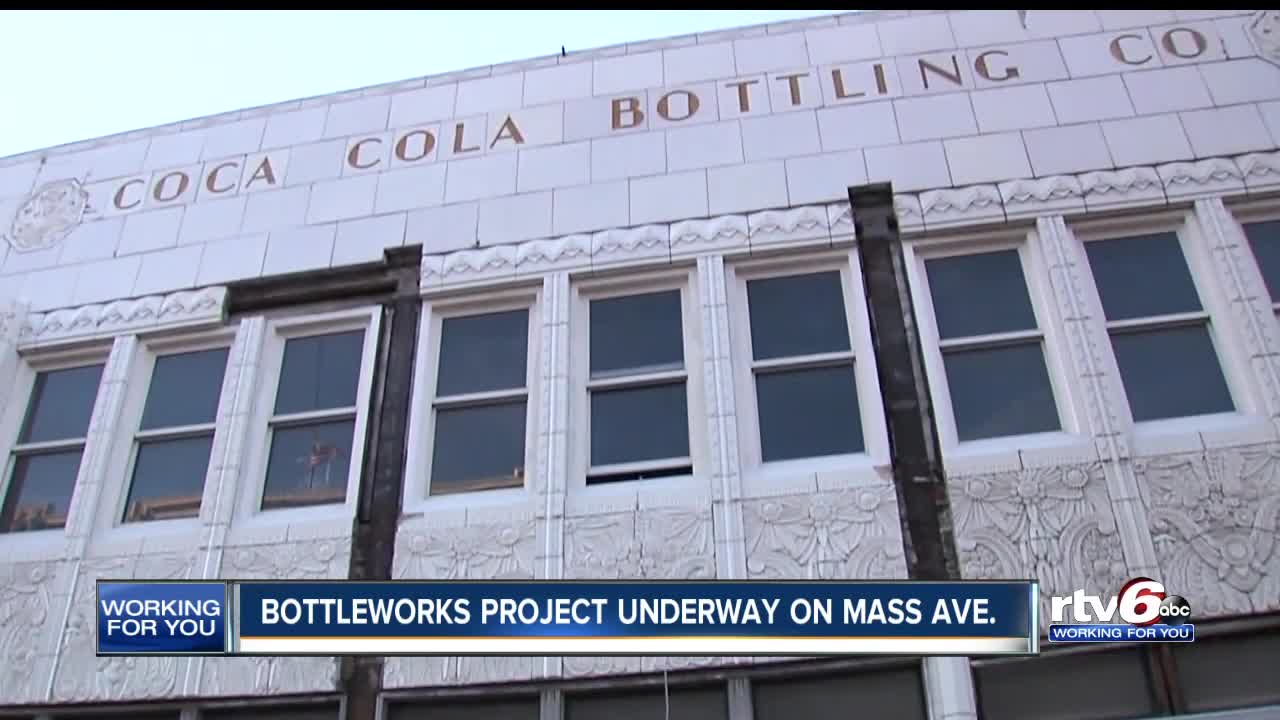 The Bottleworks project at the old Coca Cola Bottling factory is moving along on Mass Ave.

INDIANAPOLIS — Construction along Mass Ave always gets people talking, especially when it involves a historic building like the old Coca Cola Bottling factory.

From planning to ground-breaking, the building's transition into a mixed-use property with apartments and shops has been going on for more than two years.

Hayley Brown works at Homespun Modern Handmade. She has a front seat to the changes happening in the 800 block of Mass Ave.

"Eight-hundred block is a good place, and we're glad this is going to bring extra business down here," Brown said. "I think this will be something that is a positive for our neighborhood.

Gavin Thomas, vice-president of development for Hendricks Commercial Properties, the company transforming the Bottleworks District, described how they're going to fill the space with businesses.

"We're always looking for that uniqueness factor, the one-of-a-kind factor. That's what attracted us to the Bottleworks project in general. It's one-of-a-kind," Thomas said. "We want people that are passionate, whatever craft they're into. Whether it's food, barbershop, vinyl store, these are people passionate about what they're doing."

Thomas gave the Indianapolis Bar Association an update on when Phase 1 of the project will be finished.

"End of next year, so the hotel we're shooting to open during the holiday season and those other components around this time next year," Thomas said.

Phase 2 of the project is tentatively going to be finished in 2021 or 2022. That will include apartments with 175 units planned. The question is if they will be affordable considering income levels have been lagging behind rising rental rates, according to the Indiana University Public Policy Institute.

"I think we'd like to have a variety of price points," Thomas said. "We certainly don't want it to all be high-end. I would expect between $1,000 and $3,000, depending on the size of the unit or where it's at. Now, there may be other units that'll have some subsidy to it, getting below that thousand mark."

And that iconic facade? It's not going anywhere. Thomas said they're doing a lot of work to make it look brand new again. Something many people, like Brown, are happy about.

"Yes, for sure. I'm a fan of anything Art Deco," Brown said.