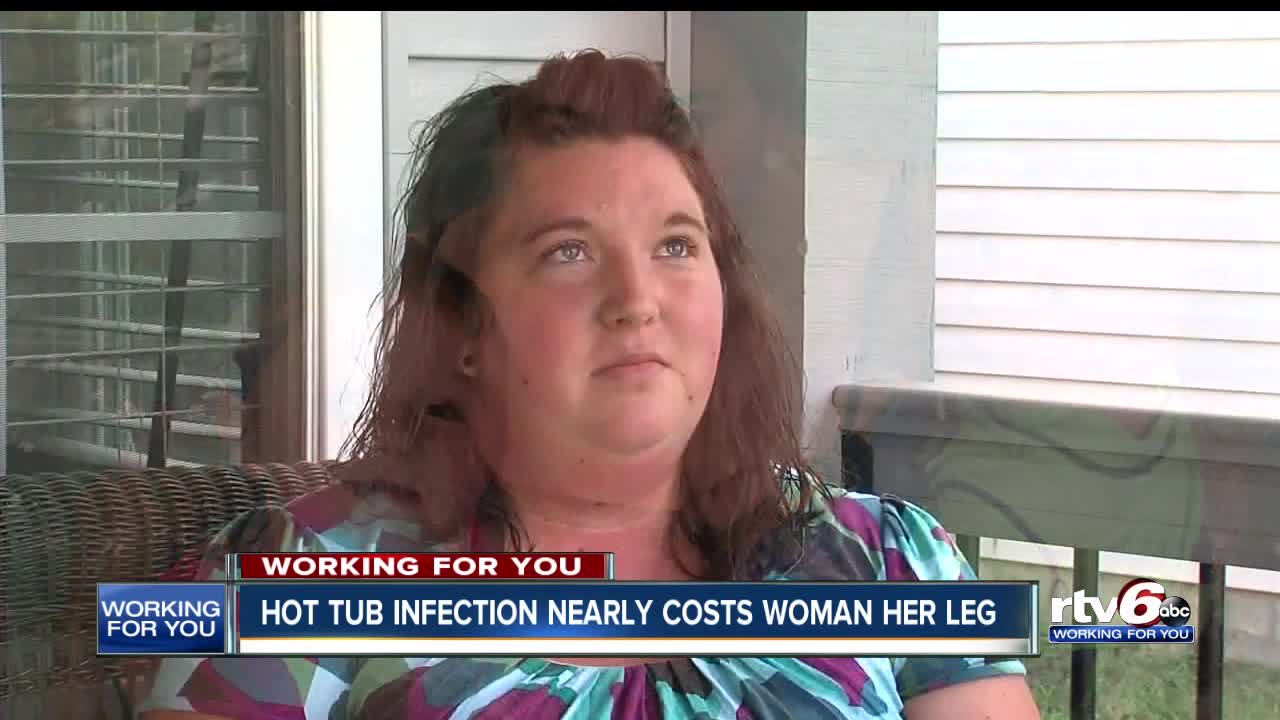 A woman nearly lost her leg after using a hot tub while on vacation.

(NOTE: The video above has some images that may be disturbing to some viewers.)

INDIANAPOLIS — An Indianapolis woman nearly lost her leg after using a hot tub while on vacation.

Taylor Bryant is finally able to walk around after a debilitating infection in her right leg that started on her young family's first trip out of state over spring break in Pigeon Forge, Tenn.

"We got down there Sunday evening and I started feeling sick on Wednesday," Bryant said.

By Thursday, she decided to get her leg checked out and she ended up in the hospital. Doctors asked if she had been hiking. She hadn't, and they wanted to know what she had been doing.

"Every night, Sunday, Monday, and Tuesday, we were in the hot tub and she was like, 'That's the only way I thought you could get this infection was from a hot tub,'" she said.

Doctors told her it was possibly pseudomonas folliculitis, something people usually contract from pools and hot tubs that have not been cleaned properly. She was given antibiotics and told to go straight back to Indianapolis to see her doctor.

"He started me on another oral antibiotic and I did those for 10 days," Bryant said.

She couldn't walk and had to use a wheelchair to get around, and that's when wound and infection specialists were called in as Bryant's leg got worse.

"My husband even asked, 'Are we gonna be able to fight this off? Are we talking about amputation?" she said. "They were like, 'There's nothing that we can promise right now.'"

The young mother was terrified.

"You're literally thinking at that point that it's possible you're going to lose your leg," Bryant said. "I was a bawling mess in the room. I was like, I could be without a leg at 26."

She was started on IV antibiotics for 20 hours a day for four days.

"Within 24 hours you could already see some of it dying down," Bryant said.

The Mayo Clinic said folliculitis is common and results in inflamed hair follicles, and that you should see a doctor if it doesn't improve in a few days. Bryant's doctors told her a common grooming activity can make it easier to enter your body.

"When you shave your legs you are breaking skin so that's opening areas on your legs," she said.

"If it's not properly clean it's gonna stick against the walls of the hot tub," Bryant said. "I don't think I could ever do a hot tub."