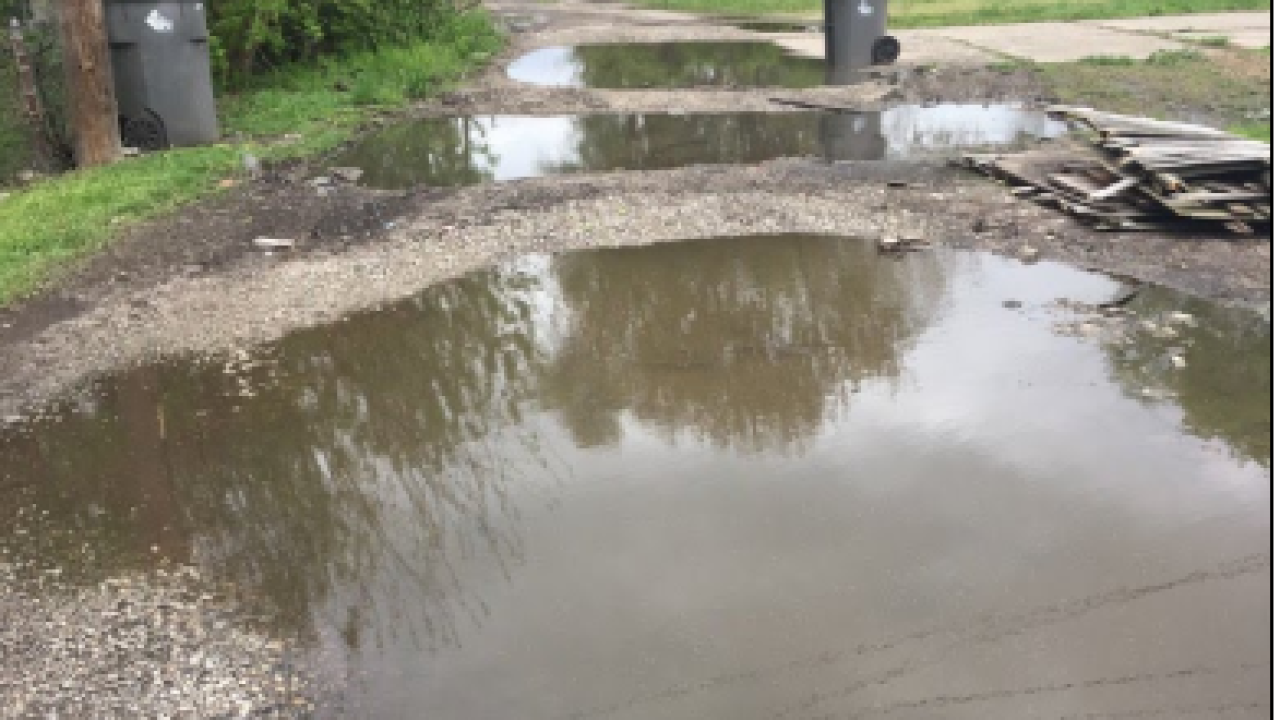 RTV6
A woman is concerned about the giant potholes that line the alley behind her father&#39;s house on the north side of Indianapolis.

INDIANAPOLIS — Just to get home, families living in a north side neighborhood had to contend with large holes in an alley that were filled with water.

After several complaints to the city went unanswered, one woman took matters into her own hands.

"They were huge. They looked like lakes. Like a little lake in the alley," Jannifer Denise said.

Denise said driving down the alley just off Keystone Avenue has been hazardous for years. The alley is the only way to access her father's home, so she called the Mayor's Action Center. Her complaint has been open since 2015.

"The lady was like, 'I understand, they just aren't fixing the alleys right now,'" Denise said.

However, matters became more urgent this summer after her father had a stroke and was diagnosed with dementia. He now requires home care.

"Getting help sounds great. But I panicked when they said they were going to send people out to the house and I thought how are they going to get to him?" Denise said.

She hired a company and paid $780 to have stones installed on the alley.

"My dad said it's the city's responsibility. I said, 'It's their responsibility, but it's my problem. I have to make sure you are taken care of so I have to have someone come out and fill it,'" Denise said.

The company hired to do the work reached out to RTV6 upset because they feel Denise shouldn't have to pay to get the work done.

"We sent out somebody and he called me and said, 'Oh, yeah. This is terrible. One load of stone will not be enough for this. The holes are so big the cars are sinking in,'" Anne McCurdy, a dispatcher with Brookfield Sand and Gravel, said.

McCurdy has taken a special interest in the situation. She even called the Mayor's Action Center because she was worried Denise will have the same issue in two years.

"I just hope somebody can take the initiative and fix the problem," McCurdy said. "I don't think she should have to pay for it. If the city could step up, that would be awesome. Would be nice to take care of the gentleman."

The Mayor's Action Center said they have more than 2,300 open cases for potholes in alleys, but it could include duplicate calls for the same chuckhole.

Ben Easley, a spokesman for the Department of Public Works, said it is not DPW's current direction to prioritize addressing alley requests over street rehabilitation projects. However, he said more funding for transportation infrastructure maintenance certainly wouldn't hamper them to get to a place to better address alleys in the future.

Easley said they do not receive gas tax revenue for non-name streets like alleys, so only larger thoroughfares and residential streets are considered when allocating funding to Marion County. Since alleys are less traveled, he said streets with higher traffic volumes must remain the priority.

Easley also said the Street Maintenance Team, which was introduced this year, specializes in fixing residential streets that would likely not be addressed with large infrastructure rehabilitation contracts.

"With the addition of the Street Maintenance Team, it is indeed possible that DPW will get to a point where we might be able to prioritize alley improvements. However, repairs to city streets with higher traffic volumes must remain the priority," Easley said.