WRTV Investigates uncovered the problem in 2018 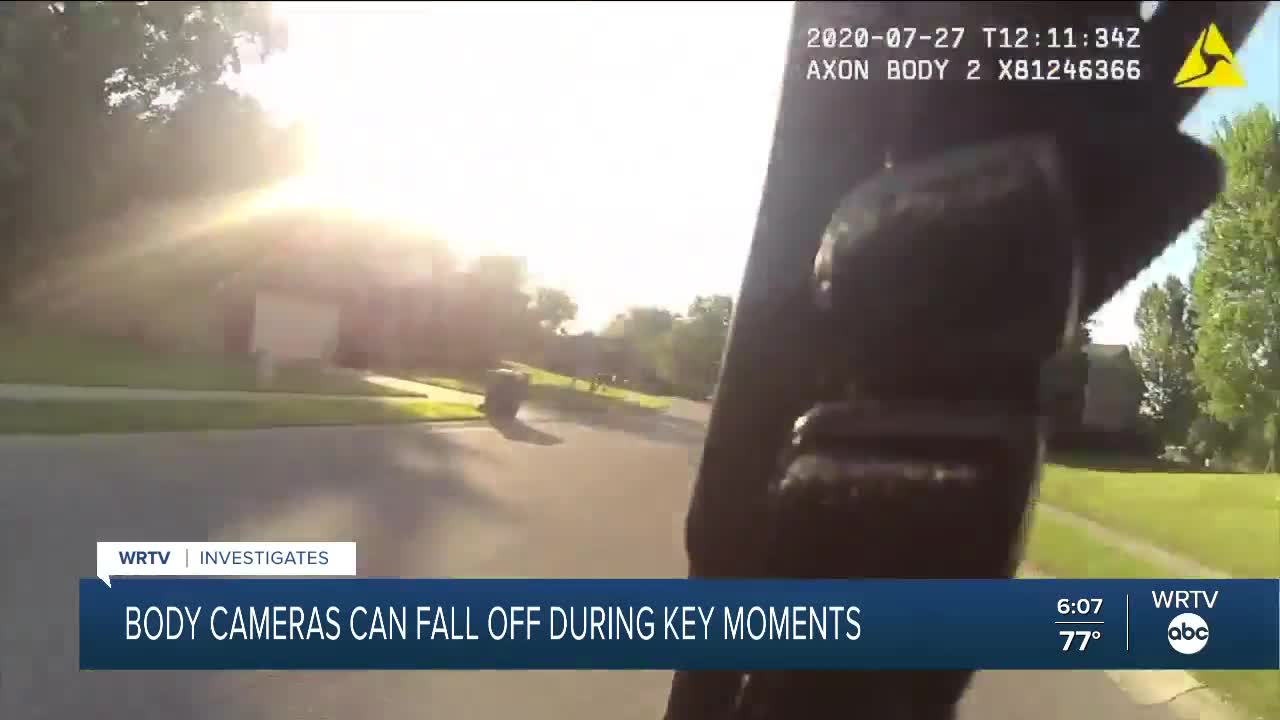 WRTV Investigates has uncovered police body cameras falling to the ground, failing to capture key moments of police interactions with the community.

CARMEL — WRTV Investigates has uncovered police body cameras falling to the ground, failing to capture key moments of police interactions with the community.

It’s a problem first uncovered by WRTV Investigates in 2018.

The Carmel Police Department is now making changes to its body cameras in part because of what happened in a July incident when a Carmel police officer shot and killed a suspect.

The Carmel officer’s body camera didn’t show the shooting because the camera became dislodged and fell to the ground.

The point of body cameras is to capture key moments of police interaction, as well as to improve transparency and trust with the community, but WRTV Investigates has found body cameras can come off during critical seconds.

On July 27, Carmel Police officer Shane VanNatter was chasing suspect Julio Virula, who had shot and killed his girlfriend and wounded her mother.

VanNatter’s gun bumped his body camera, which turned the camera upside down, and while running, the body camera became dislodged completely and ended up on the ground.

When VanNatter shot Virula, the body camera was still on the ground, only capturing audio of the gunshots.

WRTV Investigates told you about this problem of body cameras becoming dislodged back in 2018.

It happened in Muncie when two officers’ body cameras fell to the ground as they punched and tased a handcuffed suspect.

Muncie police demonstrated how the magnetic mounts they used at the time could create problems during a physical altercation with a suspect.

In 2018, they started to use vests that better secure the body cameras and greatly reduce the possibility of dislodging.

WRTV Investigates did some checking and found other agencies have had the same problems with body cams becoming knocked loose.

Baton Rouge police took heat for the deadly shooting of Alton Sterling in which officers’ body cameras became dislodged during the incident.

Locally, Lafayette Police have also had problems with dislodging.

“During altercations with suspects, the cameras have fallen off,” said Sgt. Matthew Gard with Lafayette Police in an email to WRTV in 2018. “However, this is true with other equipment that officers wear on a daily basis.”

To address falling body cameras, some central Indiana police departments like Lawrence Police use a different type of body camera that is fastened inside the officer’s uniform.

"This is one of the reasons why we selected the vendor we selected because of the ability to secure the camera inside the officer's uniform," said Gary Woodruff, Deputy Chief of the Lawrence Police Department in 2018.

Following the July incident, the agency announced they’re ordering new mounts through their vendor Axon, which are redesigned to reduce the chance of a camera getting knocked out.

The new mounts include a lip that pinches the shirt’s fabric around the outside, which helps to lock it into place.

“There’s no perfect or ideal solution,” said Dr. Jeremy Carter, the director of criminal justice and public safety for the O’Neill School of Public Affairs at IUPUI.

Dr. Carter said even body cameras that zip or button inside uniforms can have obstructed video or distorted sound problems.

“There are some that attach to hats,” said Dr. Carter. “They all come with pros and cons in terms of what kind of view shed and audio you get. That's why you see it mounted to the chest which is usually the best location for the camera in terms of what it captures, what it hears. But if you're wrestling with someone, if you're running, the likelihood of it getting knocked off is a reality. "

WRTV reached out to Axon, which provides body cameras to Carmel and other police agencies in Central Indiana.

“When it comes to Axon’s cameras, we provide many different body-worn camera mounting options to customers. The mounts are developed based on direct feedback from law enforcement and are designed for the types of incidents officers encounter in the field. Generally, law enforcement agencies test and evaluate these mounting systems before deploying body cameras to decide which mounts work best for their officers. Some mounting options are magnetic and are meant to break away by design, so that a subject cannot use the camera or mount to pull the officer toward them. Other mounting options require more force to break away from the officer or uniform as they're designed to have higher retention to the uniform. We are continually working with customers to improve upon our mounting options. Although Axon products perform at the highest level in the industry, use-of-force incidents are dynamic and fluid in nature and all outcomes can be unpredictable. Axon prioritizes the safety of our customers and the people they serve above all else, which is why we remain committed to developing technology and training to protect life in public safety.”