Call of a lifetime: How one Columbus small business is surviving thanks to Barstool Sports 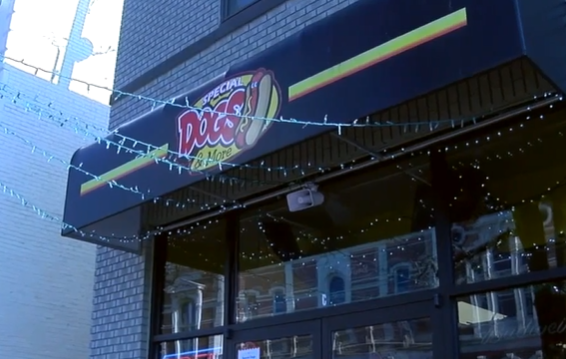 A Columbus restaurant has new hope it can survive the pandemic. INDIANAPOLIS-- The year 2020 was going to be “the year” for Special Dogs and More. At least that is what owners Randy and Robin Lapidus thought heading into March.

Its mission is simple: ensure neighbors with intellectual and mental disabilities can work and find a home with the Lapidus family.

“Great food. That's just the added bonus,” Robin said with a laugh. The hot dog business grew out of love three years ago shortly after their daughter, Rachel, developed complications following a heart attack that put her into a coma.

“Even the first two weeks of March were really good. We were pacing above the year before. Then COVID hit. When COVID hit, it was like starting all over again,” Randy said.

Special Dogs and More is a staple on Washington Street in Columbus, but the downtown location meant the loss of foot traffic when the pandemic took hold. The Lapidus family had to do everything and anything to stay open.

Fast-forward to December and a Facebook message from a friend turned into a call of a lifetime. In the message, a friend suggested the family apply for the "Barstool Fund."

The next business we're helping is Special Dogs & More, in Columbus, IN. #BarstoolFund

"It's one of those things that you don't think you're going to be picked. They received thousands, maybe tens of thousands of applications,” Randy said.

Days after Randy and Robin wrote to Barstool and made a video, Randy got a Facetime call from Barstool founder, Dave Portnoy. The Columbus small business became a part of the Barstool Fund one week ago.

The fund was started last month to help small businesses across the country survive. Randy says getting the call from Portnoy meant a future for his business. “For the first time since the pandemic has started, that light is no longer just a little pinhole. That light is a lot bigger,” he said.

Portnoy donated $500,000 of his own money to kick-start it, but now it's neighbors helping neighbors with nearly $17 million raised for 70 plus businesses.

Randy and Robin said the money will help cover rent throughout the entirety of the pandemic.

“To know that we're going to be here, to be able to give these young men and women these opportunities. It's the best feeling in the world. It just puts you on cloud nine,” Robin said.

WRTV also reached out to one other Central Indiana business who is also part of the Barstool Fund. Crabtree Concessions in Parker City declined an interview at this time, but said they are “very blessed” for the help during this difficult time.

The Barstool Fund is still accepting small businesses to apply and encourages donations on its website.