Haarms leaves with concussion in Purdue's loss at Nebraska 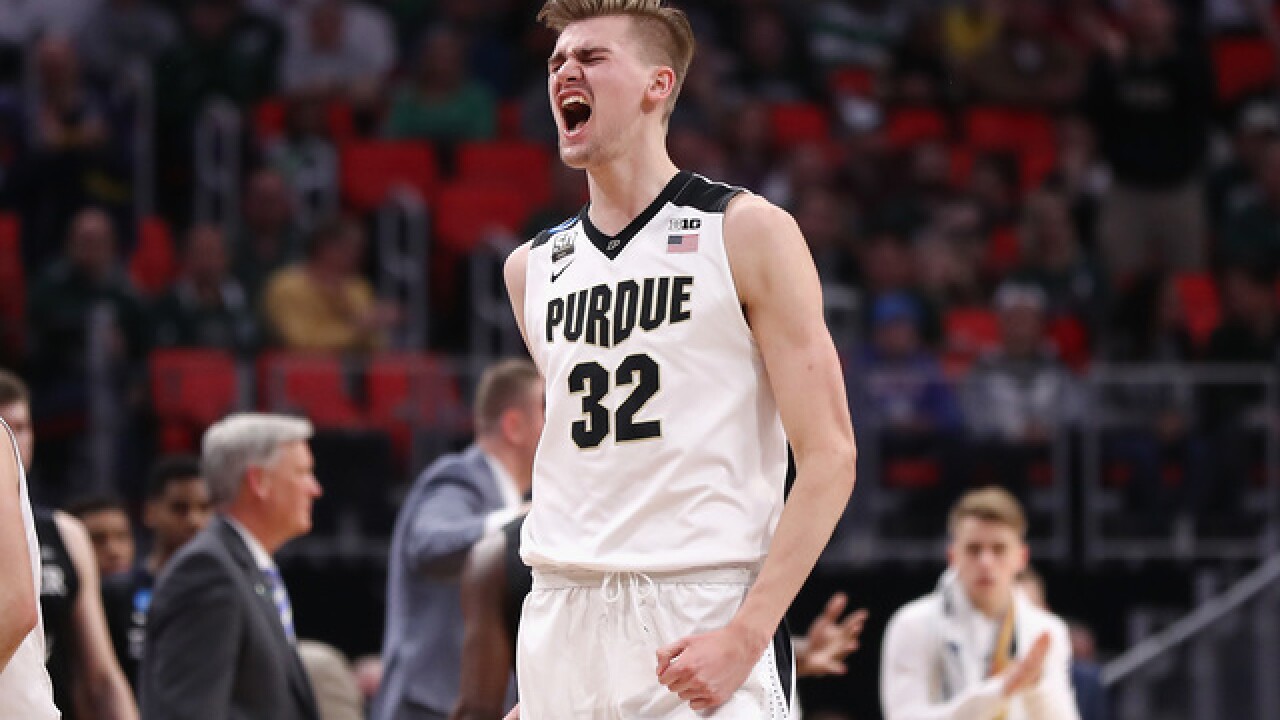 Copyright 2018 Scripps Media, Inc. All rights reserved. This material may not be published, broadcast, rewritten, or redistributed.
Elsa
DETROIT, MI - MARCH 18: Matt Haarms #32 of the Purdue Boilermakers reacts during the second half against the Butler Bulldogs in the second round of the 2018 NCAA Men's Basketball Tournament at Little Caesars Arena on March 18, 2018 in Detroit, Michigan. (Photo by Elsa/Getty Images)

LINCOLN, Neb. — Cam Mack had the first-ever triple-double for Nebraska, Dachon Burke scored 18 points and the Cornhuskers gave Fred Hoiberg his first Big Ten win with a 70-56 victory over Purdue on Sunday.

Mack had 11 points, 10 rebounds and 12 assists as the Cornhuskers (5-6, 1-1) won for the first time in four games and less than 48 hours after a 96-90 overtime loss at Indiana. The rebounds and assists are a career-high for Mack.

Burke made four 3-pointers, including one that pushed Nebraska's lead to double digits in the last 3 minutes, and he followed that with a fast-break dunk off Mack's pass to all but finish off the Boilermakers.

Purdue's Matt Haarms left the game with 6:10 remaining with an apparent head injury. The 7-foot-3 Haarms and Nebraska walk-on guard Charlie Easley got tangled up as Easley drove to the basket. Haarms hit his head on the floor and was tended to by athletic trainers. He staggered as he got up and, with assistance, went to the locker room. After the game, Purdue coach Matt Painter said it was his understanding Haarms had a concussion.

Purdue shot a season-low 30.4% (24 of 79), never able to complete a comeback despite making several pushes in the second half.

The Huskers rode a 17-6 spurt over the last 6 minutes of the first half to a 34-23 lead. Kevin Cross and Burke got it started with back-to-back 3-pointers and finished with Mack's off-balance 3 from the right wing.

Haanif Cheatham's 3 from the left corner stretched it to 42-27 early in the second half.

The 6-9, 270-pound Williams caused problems inside, making his first four shots after halftime, and Isaiah Thompson and Eric Hunter Jr. hit back-to-back 3s to cut it to 52-48.

Shortly after Haarms went out, the Huskers rebuilt the lead to 60-52, with the 6-9, 260-pound Yvan Ouedraogo banking in a soft-touch shot from the right wing.

Purdue: The Boilermakers had their worst shooting game of the season, and that led to its first loss in four games in the series with the Huskers. Purdue had come in having won six of seven against Nebraska and scoring 75 points in each of its last three visits to Pinnacle Bank Arena.

Nebraska: The Huskers, who have struggled shooting up until this weekend, have found something offensively. It was a balanced effort. It also showed moxie, showing up like they did after playing a grinding game against Indiana on Friday.