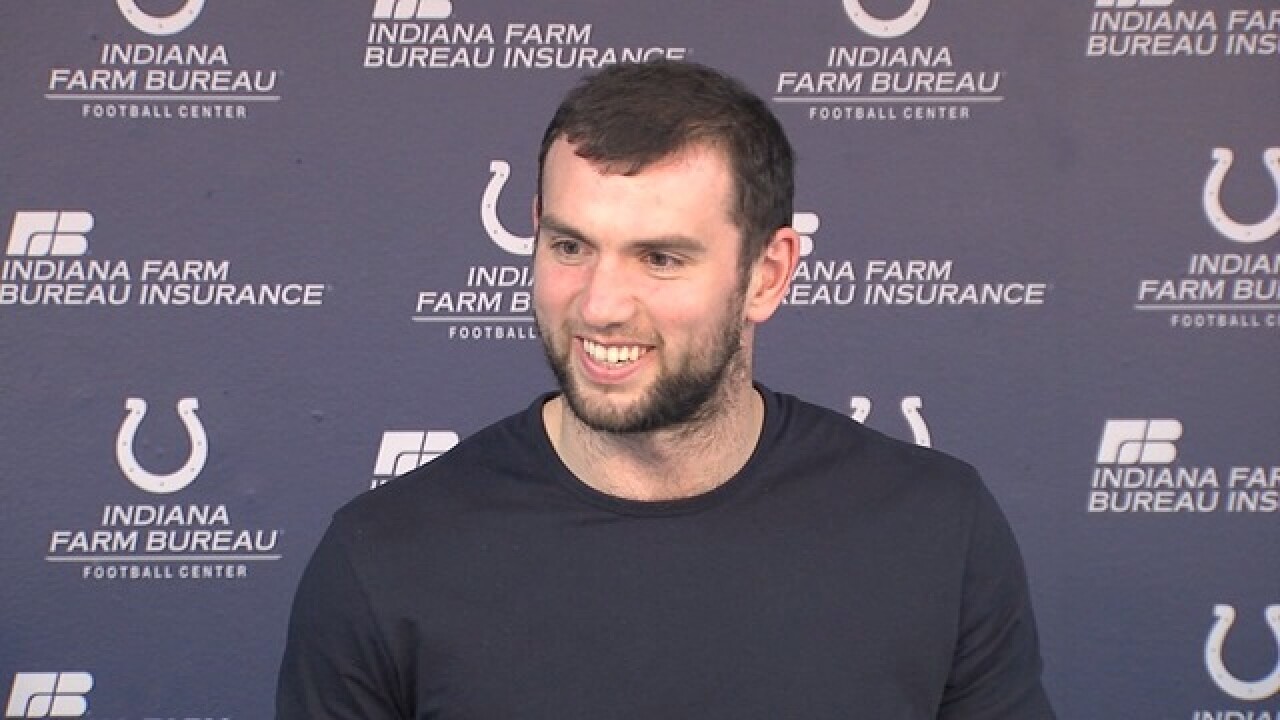 He feels good, hopes to be full go when training camp begins and believes he will be a better overall quarterback when he returns.

All he has to do now is prove it.

For the first time in more than three months, Luck fielded questions from local reporters about his surgically repaired right shoulder and explained his longer-than-expected recovery might have been at least partially the result of his desire to come back too quickly.

“I think I pushed a little too hard at times. Your body, as I’m learning, will tell you no at certain times and you just have to listen to it,” Luck said as the Indianapolis Colts started their offseason work.

“I’ve gone and skipped steps before and paid for it. Been in pain and not able to help the team. Embarrassed, guilty, whatever. I’m not going to do that again.”

Luck didn’t go into specifics about what he would, could or should have done differently after initially hurting the shoulder in September 2015.

He missed the next two games then made four straight starts before suffering a season-ending liver injury in November.

Luck opted against surgery that offseason and instead wound up signing a five-year, $140 million contract extension.

In 2016, he started 15 games and had his best statistical season despite continued pain. But he hasn’t taken a snap since having surgery for a partially torn labrum in January 2017, and he still isn’t throwing regulation-sized footballs. He’s been limited to working only with miniature footballs this offseason.

He spent the next month seeking additional medical opinions before moving his rehab to Europe.

Luck finally returned to the team facility in late December and has spent most of the past three months working out in California with noted quarterback experts Tom House and Adam Dedeaux.

The good news is Luck says he’s feeling much more confident in his recovery.

“If I wasn’t making progress, it would freak me out and we would have to change something. But I am,” he said. “I’m feeling better.”

The bad news: Fans have heard all this before.

Whenever Luck gets back, he will be working with a vastly different supporting cast.

New head coach Frank Reich will be calling the plays. Running back Frank Gore and receiver Donte Moncrief left in free agency and receiver Phillip Dorsett was traded to New England for Jacoby Brissett, who started the final 15 games for Indy last season.

“I wouldn’t say I’m changing my throwing motion,” he said. “And that’s a big part of what I’ve been working on, making sure I’m using my body as effectively as possible to throw a football and not over- or under-compensate in any way.”

Some of the Colts’ newcomers, such as recently signed free agent Eric Ebron, chose Indy because they believe Luck will be better than ever.

“He was the reason I came here, to keep it honest,” said Ebron, a tight end. “It doesn’t matter as much where I played, I wanted a quarterback who would work with me the way that I knew I needed him to work with me.”

When exactly Ebron and Luck will start working out together remains unclear.

While acknowledging there now is a timetable for his progression, he’s keeping it confidential for now.

But the biggest difference between this year’s offseason workouts and last year’s is that Luck sounds more confident about himself and his shoulder.

“I feel stronger, I feel more fit,” he said. “I feel way more confident in myself and I don’t look at my shoulder and say ‘why are you failing me?’ like the guy in ‘The Old Man and the Sea.’ I feel like I have a bit more grasp of the situation. There is still a bit of a journey left and I’m not going to skip any steps.”

NOTE: The Colts have put receiver Rodney Adams on the reserve-retired list. Adams was a fifth-round draft pick out of South Florida in 2017.

MORE TOP STORIES | Two men killed after two planes collide at Marion airport | One person killed, five others injured after pursuit ends in fiery crash on Indy's east side | Man identified who was shot during meeting to sell drone in Lawrence | IMPD: Mother, son arrested with more than $1 million in meth, cocaine |  Indianapolis man charged with murder of longtime friend