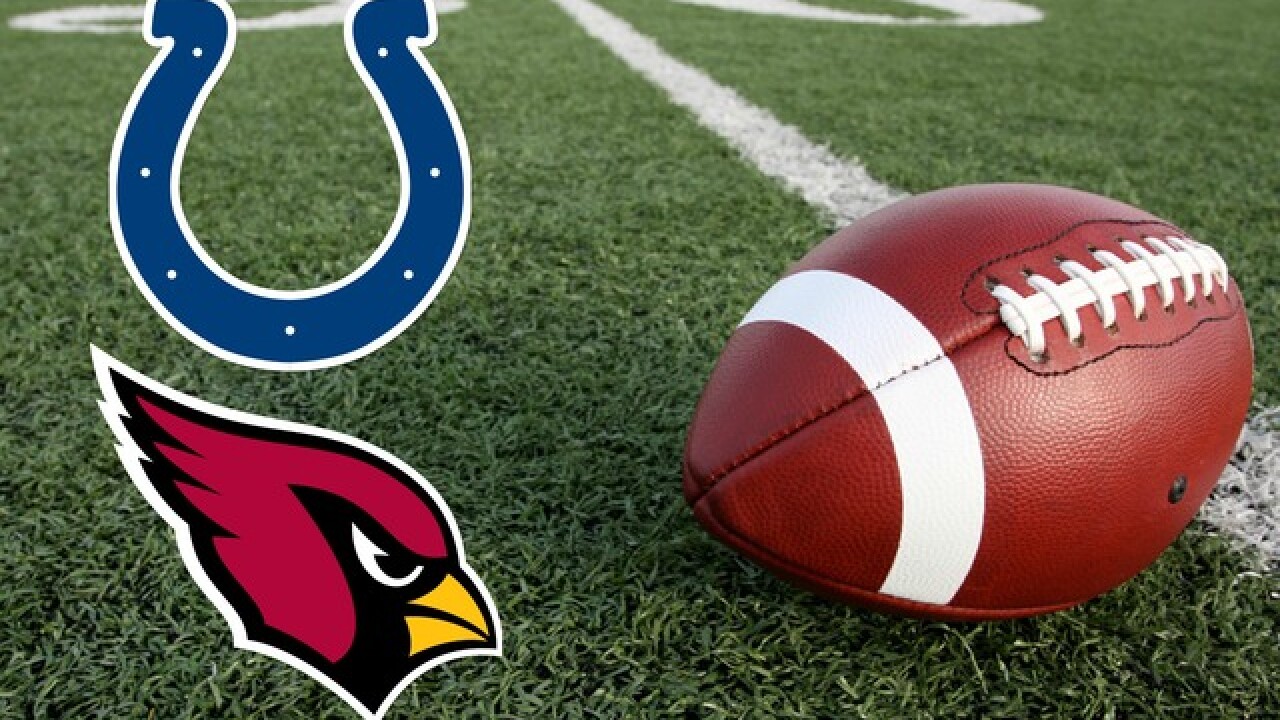 INDIANAPOLIS -- The Indianapolis Colts take on the Arizona Cardinals in their home opener at Lucas Oil Stadium on Sunday.

Both teams come off rough openers. Arizona lost at Detroit and saw star running back David Johnson, one of the NFL's most versatile players, break his wrist. Look for Larry Fitzgerald to be the focal point of the offense against a weak secondary.

Indy is without Andrew Luck again - and for who knows how long. The Colts put out one of the worst performances of Week 1 in being routed by the Rams.

The last time they faced off in Atlanta, the Falcons routed the Packers for the NFC title. When they meet Sunday night, the site will be different, with the Falcons playing their first regular-season game in Mercedes Benz Stadium.

Considering how poorly Green Bay played last January at the Georgia Dome, it probably welcomes the change of venue.

"It's past," Packers star quarterback Aaron Rodgers insists. "You can't rewrite history. It's just two 1-0 teams who both think we can be there at the end of the season. These are the type of games, like last week, that you win these games and you feel better in December and January when you're coming down to filling out that 12-team bracket."

They got to 1-0 in dissimilar ways.

Green Bay completely shut down Seattle - yet another highly touted NFC contender - at Lambeau Field. Atlanta struggled with lowly Chicago before a goal-line stand, helped by a dropped pass that should have been a touchdown, allowed it to survive.

Now, the Falcons, who followed that NFC championship win with a Super collapse against New England, open their new digs officially. The roof will even be open for the first time during a game, it appears. So the Falcons would play their first open-air home game since 1991, their final season at Atlanta Fulton-County Stadium.

Week 2 began with the Houston Texans' 13-9 victory over the Cincinnati Bengals on Thursday night.

Deshaun Watson ran 49 yards for a touchdown in his first NFL start and led Houston's depleted offense to a late clinching field goal. Watson showed up in a black tuxedo for his first NFL start - it was his 22nd birthday, no less - and showed the flash that helped him lead Clemson to a national title.

The Texans (1-1) got the most out of their depleted offense, and then let their defense do the rest. The Bengals (0-2) have failed to score a touchdown in their first two games to open a season for the first time in their 50 seasons.

After manhandling the Giants, Dallas can really prove it is an NFC power again by crossing over, heading to the Rockies and beating the Broncos. The Cowboys had the ball for so long against New York that the Giants' formidable defense withered. Denver's D is just as good, so it's a matchup of Dak Prescott, Zeke Elliott, Jason Witten and that terrific offensive line against Von Miller, Aqib Talib & Co.

Dallas last beat Denver in 1995, a Super Bowl season for the Cowboys.

The Broncos might have found yet another dangerous receiver in Bennie Fowler III, who had two TD receptions as they held on to edge the Chargers on Monday night. But the run game must be sharp in this one.

Both come off impressive road wins.

Eagles coach Doug Pederson is a disciple of Chiefs head man Andy Reid. Their forte is offense, and Kansas City was opportunistic and, at times, dominant in New England with the ball.

RB Kareem Hunt set a rookie debut record with 246 yards from scrimmage, while WR Tyreek Hill has a 60-plus yard TD in five consecutive games.

Philly's Carson Wentz, 4-0 in September matches, must watch for Chiefs linebacker Justin Houston, who had 4 ½ sacks the last time the clubs met.

Yes, it really did happen in the 2017 kickoff game: New England got hammered in the fourth quarter at home by Kansas City.

"What you are in September is different from what you're gonna be as the season goes on," Brady says. "You're trying to see where your deficiencies are and you're trying to make improvements. Obviously what we did the other night is not good enough, by any means."

New Orleans had far too many deficiencies at Minnesota, and its loose coverage of receivers could be its demise against Brady. But Drew Brees can make up for some issues.

The Vikings, particularly second-round running back Dalvin Cook (127 yards rushing) were impressive on Monday night against New Orleans, but a short turnaround for a trip to the Steel City is never enviable. Their last win in Pittsburgh came on Sept. 24, 1995.

Cleveland kept it close against archrival Pittsburgh, which seemed out of synch. Maybe star RB Le'Veon Bell will be more impactful after not reporting until Sept. 1; he had 32 yards on the ground last week, tying a career low.

Of note is how the Steelers appear to be building a defense to complement their all-world offense led by Bell, Antonio Brown and Ben Roethlisberger.

It's impossible to know what the Bucs have after being forced by Hurricane Irma to move their bye up to opening week. They could be dynamic on offense and improved on defense, which would put them in the mix.

Former Bucs QB Mike Glennon played well in his first outing for Detroit and was a dropped pass away from an upset of the Falcons.

"We all knew his time was coming," Bucs receiver Mike Evans says. "He's too good of a player to be on the bench."

It's impossible to know what the Bucs have after being forced by Hurricane Irma to move their bye up to opening week, too. They've spent the week in California and figure to be rusty.

If the Dolphins can get the run game on track with Jay Ajayi, they could spoil the Chargers' official debut in L.A. Well, their return there after playing all of one season as the LA Chargers in 1960, the debut year of the AFL.

Blanked last week when the comeback came up short at Denver, Antonio Gates gets chance to set an NFL record for TD catches by a tight end. He needs one to break a tie with Tony Gonzalez.

If the Giants don't have standout receiver Odell Beckham Jr. (ankle) again, and their offensive line is as abysmal as it was against Dallas, this might not be much of a prime-time showcase.

Then again, New York's defense always is worth watching. A problem for Giants fans is that they were watching too much of it vs. the Cowboys because it was on the field so often.

If Matthew Stafford keeps the Lions close into the fourth quarter, watch out. The league's highest-paid player has a knack for comebacks, including last week against Arizona.

Although they haven't made the playoffs since the last century, the Bills lead this series 5-1. Their running game with LeSean McCoy was dynamic in the opener, but it was against the Jets. This should be a saltier test.

Cam Newton appeared off in the win at San Francisco, but he still threw for a pair of scores. His backfield of Jonathan Stewart and first-rounder Christian McCaffrey could provide a spark, and the defense had four sacks of the 49ers.

OK, hold your breath for this one: The Jaguars lead the AFC South. Indeed, they smashed their way to first place by annihilating Houston (10 sacks).

Now they are home, where damage from Hurricane Irma was significant and they wound up spending two extra nights in Texas. A win over the Titans certainly would legitimize their start.

You can bet that Raiders fans are stoked over the team's performance at Tennessee, especially the balance on offense. Marshawn Lynch was in Beast Mode and eight players caught passes from Derek Carr.

The Jets probably don't have eight players who would make Oakland's roster. But at least they didn't get blown out in Buffalo last Sunday. That certainly could change this weekend.

Once a terrific NFC West rivalry, the Seahawks have won six straight overall, and the last six matchups in Seattle, including playoffs. The Niners did little right in their home loss to Carolina as Kyle Shanahan made his debut as a head coach.

Seattle looked pretty bad, too, but at least it was at Lambeau Field, where the Seahawks rarely prosper. They need to get the run game going after QB Russell Wilson was their top rusher with 40 yards. Getting RB Thomas Rawls back from a high-ankle sprain would help immensely.

For the first time in his short NFL career, Jared Goff looked like a pro quarterback in the Rams' rout of the Colts. Rookie coach Sean McVay, 31, earned first victory as the youngest head coach in modern league history, and he gets back star DT Aaron Donald from a holdout.

That doesn't bode well for a Washington team that looked downright mediocre in losing to Philadelphia. The Redskins' third-down defense, worst in the NFL last season, allowed Philadelphia to convert eight of 14 opportunities.

If the Ravens can mash the Browns on the ground and rush the passer well - both things they mastered in shutting out Cincinnati last week - they will be tough every game. Baltimore QB Joe Flacco is 15-2 lifetime against the Browns, with 24 touchdowns and 11 interceptions. Flacco did not complete pass in the second half at Cincinnati; he didn't need to.

Browns star left tackle Joe Thomas, among football's most durable players ever, has been in for all 9,996 offensive snaps since joining them as a first-round pick in 2007. Here comes No. 10,000.