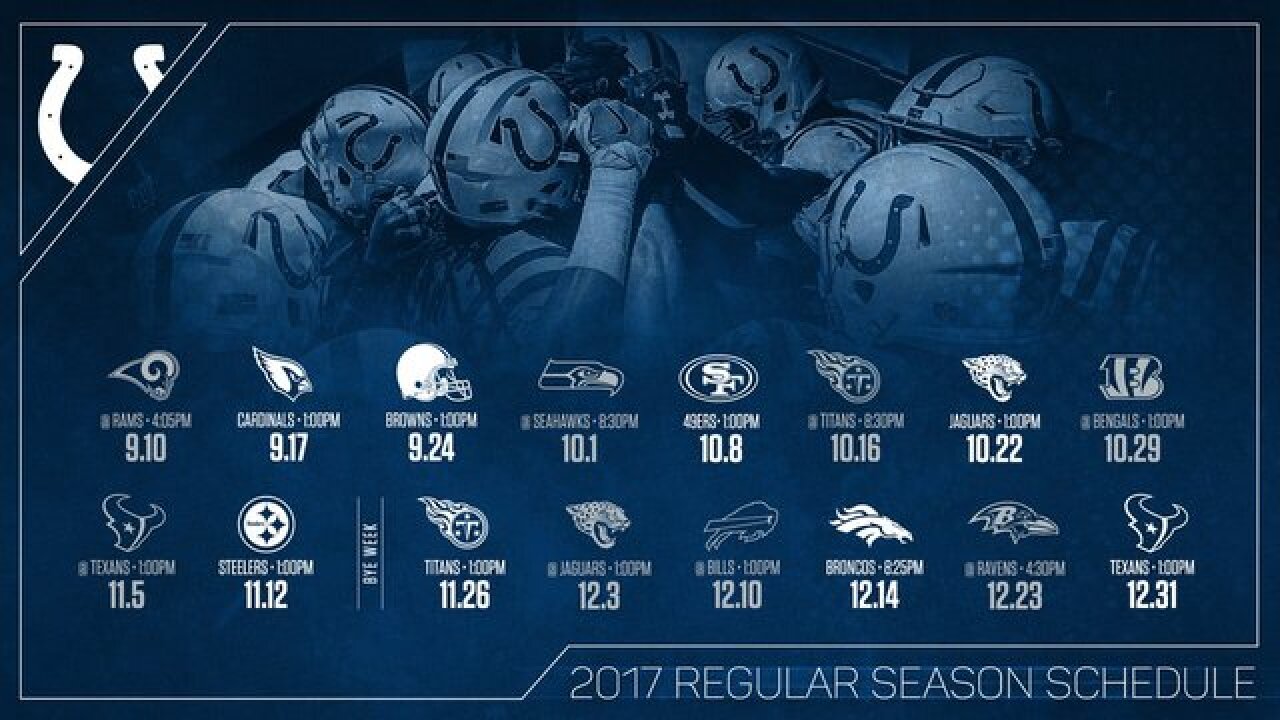 INDIANAPOLIS -- Andrew Luck's shoulder has not healed enough for him to play - but the Colts do have some luck. After all, they open against the Rams, who are missing their best player, holdout DT Aaron Donald.

A tough game to get excited about, although Indy has Frank Gore to run the ball and L.A. has Todd Gurley.

Here's what else is going on in the NFL today:

What a juicy matchup to help kick off the NFL's opening week. The two best teams in the NFC, Green Bay and Seattle - sorry Atlanta, but that Super Bowl meltdown remains too fresh - face off at Lambeau Field.

Unlike the AFC, where New England appears a hefty favorite, the NFC seems wide open. While clarity for a season that lasts 17 weeks isn't going to come in Week 1 - sometimes it doesn't come until December - it's fair to label the Packers and Seahawks as prime contenders.

Seattle's defense could be the league's best. Aaron Rodgers has plenty of targets on offense. Yep, a classic matchup in Week 1.

"This will fit together real well," Seahawks coach Pete Carroll says of his defense. "We should be good up front against the running game, which is always crucial to us. Then we will see how well we can build up our pass rush. I like the mix that we have."

That D will mix it up with what will be a well-balanced offense if Ty Montgomery fully makes the adjustment from receiver to starting running back.

Could this be a preview of a January NFC game?

"Well, every game could be looked at in that way, but yeah I think our two teams know," Rodgers says. "When you start the season, training camp, I'm sure 32 teams are talking about winning the Super Bowl.

"It's not really the case, so there's not that many teams that have those squads that could do it. Us and Seattle are usually in the mix. They have been and we have been for a long time. You know it's going to be two teams that expect to be there in the end."

The season got going Thursday night when Kansas City stunned New England 42-27 in the season opener.

Coming off their sensational Super Bowl rally to a fifth Lombardi Trophy, the Patriots faded badly in the second half.

Hunt finished with 141 yards rushing and 98 receiving, and Smith went 28 for 35 for 368 yards and four touchdowns. Tom Brady, the 13th quarterback to start an NFL game at age 40, struggled mightily in the second half and didn't throw for a touchdown, finishing 16 for 36 for 267 yards.

Also, the opener between the Buccaneers and Dolphins that was scheduled for Sunday was postponed by the NFL until Nov. 19 because of Hurricane Irma.

Nowhere in a medical dictionary is the term "Super Bowl malaise." No matter: it exists.

Will the Falcons fall victim to it? They insist not, having gotten rid of all the angst and disappointment from that collapse well before they gathered for training camp.

An offense that can beat up on anyone, particularly with running back Devonta Freeman ready to go, makes Atlanta dangerous. A defense that was somewhat suspect before it fell apart against the Patriots adds plenty of mystery to the Falcons' chances.

Oh, and no mention in that dictionary of "Lake Michigan malaise." But the Bears are in the midst of it.

The prime-time spotlight will shine on Adrian Peterson's return to Minneapolis. He's not even the top RB in the Big Easy, with Mark Ingram holding that role. But Peterson will be the focal point against a Minnesota defense that needs more consistency.

Vikings coach Mike Zimmer got testy when asked about Peterson.

"I'm just going to talk about my players," Zimmer said. When asked if Peterson will have a chip on his shoulder, Zimmer responded: "I hope we have a chip on our shoulder. This game isn't about Adrian Peterson. It's about the Vikings and the Saints. They've got a lot of great offensive weapons and he's a great player, but this game isn't about Adrian Peterson."

Much of this game - well, the buildup to it - has been about Ezekiel Elliott. With his six-game suspension for violating the NFL's conduct policy upheld by arbitrator Harold Henderson, he nonetheless is eligible to play Sunday night.

The Giants tend to play well at Dallas, going 5-3 in AT&T Stadium, and they have the defense to slow down the Cowboys' Elliott, Dak Prescott, Jason Witten and Dez Bryant. But will wideout Odell Beckham Jr. be recovered enough from his ankle injury to catch passes from Eli Manning?

Lots of folks point to the Titans as a team to watch, and with Derek Carr healthy, we know the Raiders are a contender. So this sets up as the best opening matchup in the AFC.

Even though it has 2016 Defensive Player of the Year Khalil Mack , Oakland must display a stingier defense, especially against the run. Tennessee, which also has uncertainty on defense, can pound the ball with DeMarco Murray and Derek Henry.

If the Broncos can release safety T.J. Ward, they must feel very secure in what they have on D. Having Von Miller, Aqib Talib, Chris Harris Jr., Bradley Roby and Brandon Marshall can give a team that security. Much depends on what Trevor Siemian can deliver in the passing game.

The Chargers moved up from San Diego with two mainstays, Philip Rivers and Antonio Gates, and developing youngsters Melvin Gordon at running back and Joey Bosa at defensive end. But they still are likely to be a last-place team in the tough AFC West.

The glory days are well behind the Ravens now, and they haven't seen the postseason since 2014 after a great run under John Harbaugh. Defense and special teams will be their calling card again.

Marvin Lewis has the second-longest tenure among NFL head coaches at 14 seasons and counting. He also has the ignominious distinction of an 0-7 playoff mark, which is unprecedented. He might need a playoff berth AND a win or two to stay put.

One of the NFL's best (if recently lopsided) rivalries is renewed on opening weekend. The Steelers seem primed for a run toward a seventh Lombardi Trophy, though there should be at least some concern that star RB Le'Veon Bell only reported this week. Pittsburgh has the NFL's most dynamic offense, and its defense looks improved.

Make no mistake, the Browns are improved over the squad that went 1-15. Another such debacle is very unlikely, and an upset here would silence any mistake-by-the-lake talk for a while.

Now that Matthew Stafford has become the league's highest-paid player, it's time for Detroit to use his ample skills to do more than lose in wild-card playoff games. A victory over the revitalized Cardinals would stamp the Lions as legitimate - at least in early September.

The Cardinals need a fast start after flopping early in 2016 and not being able to rally back to get a postseason berth. This roster is not that much different from the one that made the NFC title game for 2015.

While Kirk Cousins makes mammoth bucks under the franchise tag and wonders where his Stafford-like long-term deal is, the Redskins must show they have upgraded their defense. It could be tested by the Eagles' upgraded receiving corps, particularly Alshon Jeffery.

There appears to be some separation in the NFC East, with Dallas and New York at the top, then these clubs. So a win even this early could be a key for Washington or Philly.

After what the Houston area has been through because of Hurricane Harvey, a victory would provide some happiness. To get it, the defense that just might rival Seattle's will need to be dominant. Having J.J. Watt, noted defensive end and philanthropist, back on the field is huge.

Jacksonville will bring a tough-guy mentality to the field under coach Doug Marrone and overall boss Tom Coughlin. What the Jaguars probably don't bring is enough talent to move up much in the standings.

That malaise referred to with the Falcons hit the Panthers hard last year. So did injuries. If Cam Newton can return to anything close to his MVP form and the defense is stout, especially the secondary that leaked in 2016, Carolina will be a factor in the NFC South.

While San Francisco won't push the top two in the NFC West, new coach Kyle Shanahan and GM John Lynch have brought an aggressive approach that, in time, should pay off.

An impossible game to get excited about. Buffalo hasn't made the playoffs since the turn of the century. New York's offseason moves might set football in Florham Park back a century.