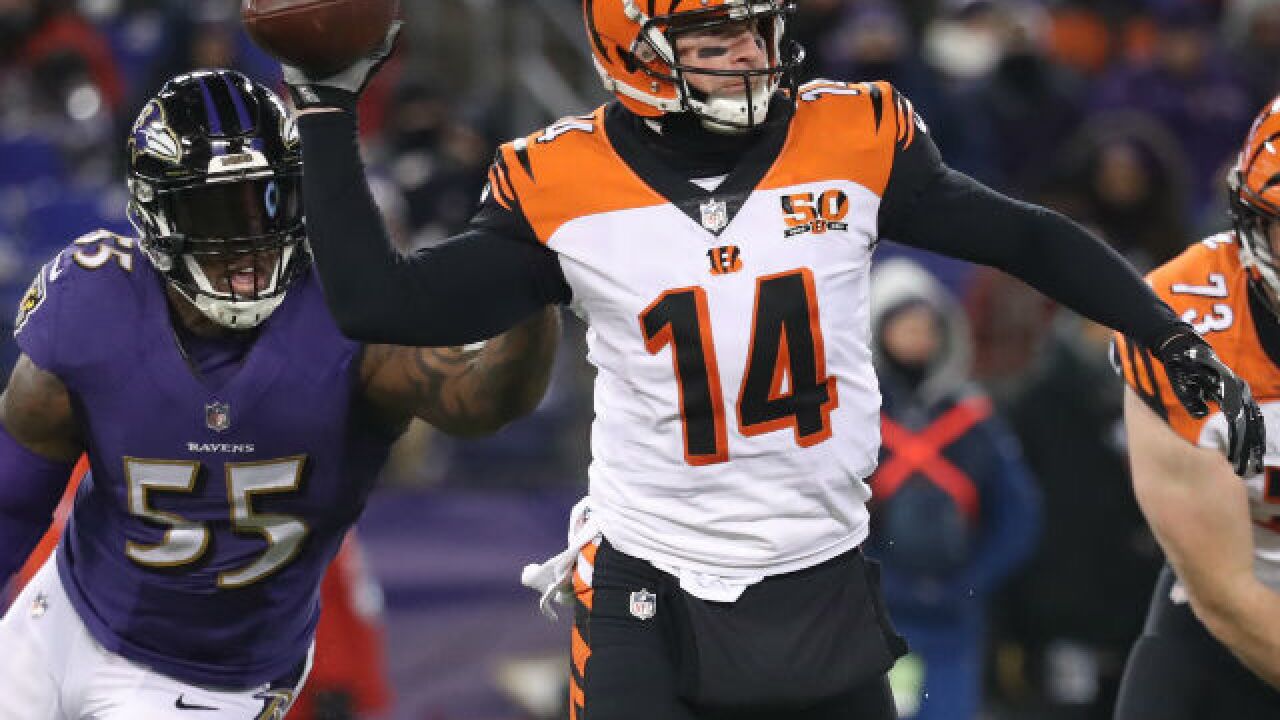 Image copyright 2017 Getty Images. All rights reserved. This material may not be published, broadcast, rewritten, or redistributed.
<p>BALTIMORE, MD - DECEMBER 31: Quarterback Andy Dalton #14 of the Cincinnati Bengals throws the ball in the second quarter against the Baltimore Ravens at M&T Bank Stadium on December 31, 2017 in Baltimore, Maryland. (Photo by Rob Carr/Getty Images)</p>

CINCINNATI – An unexpected flow of thank-yous from Buffalo Bills fans has turned into an overwhelming show of support for the Andy and Jordan Dalton Foundation.

The two-day total reached $104,000 from 4,500 donors, the foundation announced Tuesday morning. That prompted this video thank-you from the Bengals QB.

"We cannot thank you enough. This has been unbelievable," Dalton said on Twitter. He went on to explain how his foundation would use the contributions.

Thank you to everybody who is donating to the @ajdfoundation! We are blown away by the support! pic.twitter.com/KPyd5X0CFR

Donations will benefit the Foundation’s community outreach programs, including the Pass It On Fund, which aims to provide medical equipment and financial relief to families with seriously ill or physically challenged children.

Dalton was cleaning out his Bengals locker Monday morning when he joked about his new-found hero status in northwest New York.

"I think I'm the hottest guy in Buffalo right now," Dalton said. "According to my Twitter, I think everybody's loving us right now. Obviously that's a crazy fan base and they're all pretty excited."

Little did he know.

At the time, a few hundred donations had trickled into his foundation from the Buffalo area. They were thank-yous from Bills fans for his last-minute TD pass that beat the Ravens Sunday and put the Bills in the playoffs.

Then the trickle turned into Niagara Falls.

Many donations came in the sum of $17, Dalton said. That number represents how many years Bills suffered without making the playoffs – the longest streak in North American sports.

And get this: The grateful Bills organization was rallying fans to donate on the team’s Twitter account.

The Bills also had Buffalo wings delivered to Paul Brown Stadium Monday to show their appreciation to the Bengals.

Scott Aldinger summed up what it says about Bills fans:

"We might break a few tables here and there and light ourselves on fire from time to time but we Bills fans sure are classy when it counts."

The Dalton's foundation provides support, opportunities, resources and life-changing experiences to seriously ill and physically challenged children and their families in Cincinnati and Fort Worth, according to its website.