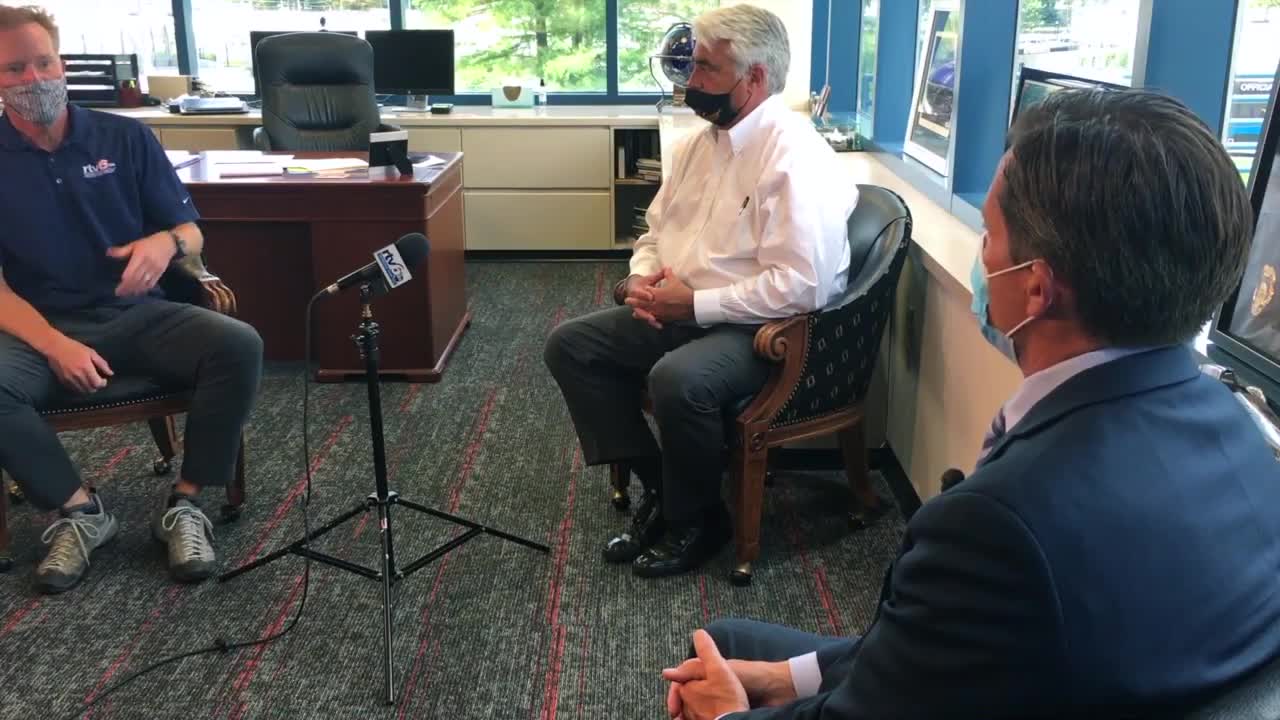 WRTV's Dave Furst talks to the Indianapolis Motor Speedway's Mark Miles and Doug Boles about the decision to not have fans in attendance at the 2020 Indianapolis 500.

INDIANAPOLIS — The Indianapolis 500 will be held without fans in attendance on Aug. 23 due to escalating concerns over the coronavirus pandemic in Marion County, the Indianapolis Motor Speedway announced Tuesday.

It will mark the first time in the 109-year history of the Indy 500 that it will be run in front of empty stands at the 2.5-mile oval track.

“As dedicated as we were to running the race this year with 25 percent attendance at our large outdoor facility, even with meaningful and careful precautions implemented by the city and state, the COVID-19 trends in Marion County and Indiana have worsened," a news release from IMS said.

First held in 1911, the Indianapolis 500 is the largest single-day sporting event in the world with approximately 350,000 people annually packing the track's grandstands and infield to watch "The Greatest Spectacle in Racing." Running the race without fans prevents the seventh cancellation in Indy 500 history. The race was not held in 1917-18 during World War I, and from 1942-45 during World War II.

In late March, IMS leaders rescheduled the race from May 24 to Aug. 23. Officials said on June 26 that Indy 500 attendance would be limited to no more than 50%.

That number was further decreased on July 22 when plans were scaled back to host the race at 25% capacity. Face coverings would be required, and the Speedway released an 88-page health and safety plan that provided guidelines and protocols for how the race would be run in 2020.

Even at 25% capacity, the race would have been the largest event held in the United States since the beginning of the coronavirus pandemic.

IndyCar and IMS owner Roger Penske previously said he wouldn't run the race without fans, but the realities of the pandemic prevailed.

In a news release, IMS said in the weeks since the June 26 announcement of 50% capacity, the number of COVID-19 cases in Marion County has tripled while the positivity rate has doubled.

"We said from the beginning of the pandemic we would put the health and safety of our community first, and while hosting spectators at limited capacity with our robust plan in place was appropriate in late June, it is not the right path forward based on the current environment," the release said.

How fans will be impacted

The announcement of no fans on race day also means all on-track activity during the month of August, including practice and qualifications, will be closed to the public. The first practice will take place on Aug. 12.

Fans who still have tickets to the 2020 Indy 500 will be credited for the 2021 race and retain their seniority and originally assigned seats.

Additionally, as announced in July, the race will be broadcast live on TV in Central Indiana for the first time since 2016.

Indiana Gov. Eric Holcomb issued a statement following the announcement thanking Penske and IMS leadership and encouraging Hoosiers to do what they can to prevent the spread of COVID-19.

Throughout this unprecedented process, the Indianapolis Motor Speedway has always prioritized the safety of the fans. I am grateful for Roger Penske’s leadership and his entire team for thoughtfully approaching this decision with transparency and collaboration. I want to encourage Hoosiers to continue to social distance, wear masks and take precautions so we can continue to slow the spread of COVID-19 and hear the roar of the engines at the track next May.

Roger Penske and the entire leadership team at the Indianapolis Motor Speedway have consistently made clear that their highest priority is the safety of Indy 500 fans. That has been evident throughout the last several months, as they have consistently lived up to their commitment to collaborative planning and careful consideration of the data.

For more than a century the Indianapolis 500 has been a favorite community tradition and I’m confident that fans will soon gather in the famed Indianapolis Motor Speedway once again.

Speedway Town Manager Carlos May also reacted to the announcement.

“We respect Roger Penske and his team’s decision to put the safety of the fans, the teams, and our community before anything else. We know without a doubt that the employees of IMS are just as disappointed as the fans that the race will run on August 24 in an empty stadium.”