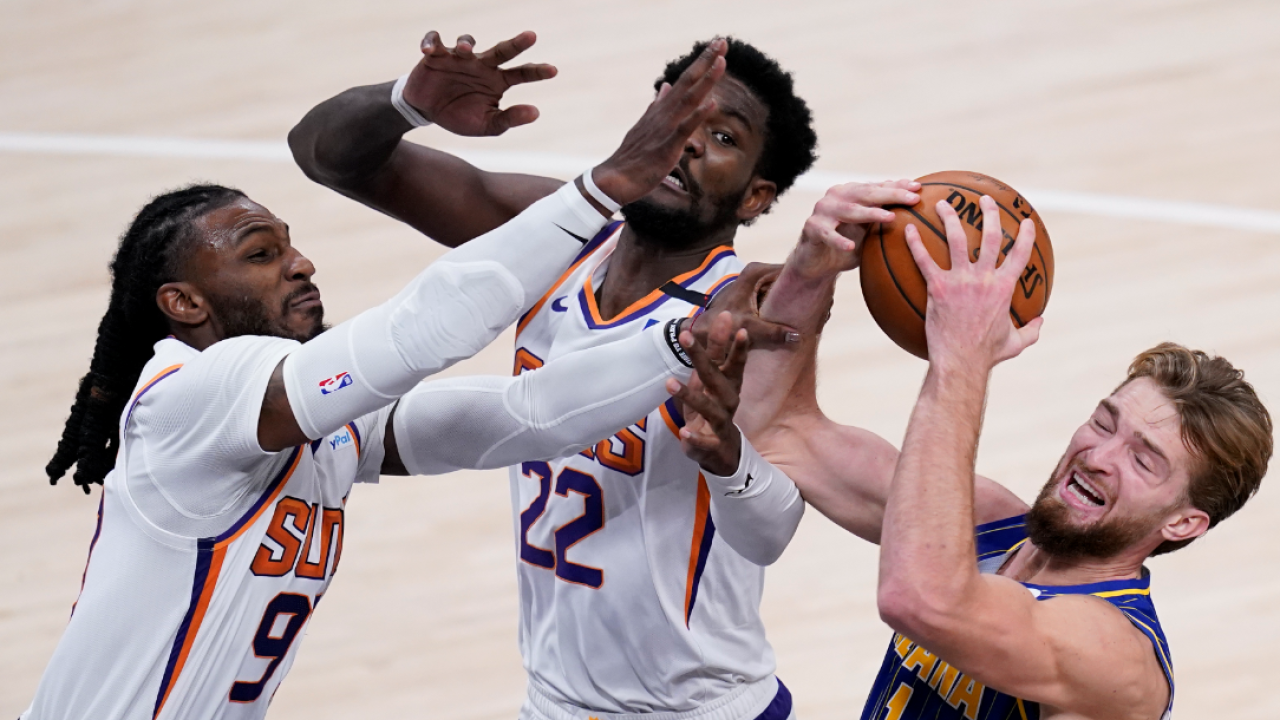 Associated Press photo.
The Pacers Domantas Sabonis fights for a rebound in Saturday's loss to Phoenix.

INDIANAPOLIS — The Pacers head off on a five game western road trip trying to shake off a tough loss to Phoenix, 125-117, Saturday at Bankers Life Fieldhouse.

It was a close game until the Suns took charge in the final period. The visitors were ahead by three points heading into the fourth, but an 11-0 run put them up by 11 midway into the quarter. Phoenix would eventually lead by as many as 15 points.

Indiana forward Domantas Sabonis, who had 28 points to go along with 22 rebounds, said the Pacer defense wasn't up to par, forcing just three Phoenix turnovers. "They came prepared you know, and I feel like it's on us, you know we weren't as aggressive as we usually are, denying out of bound plays, pressuring the ball," he said. "We didn't have as many deflections as we usually do, so I feel like it is our fault, We should have come in with a stronger mentality, so it's our fault.

The Pacers could not contain Suns forward Mikal Bridges, who was averaging 13 points per-game, but had a career-best 34 is this one. "Ah, my teammates, they just did a good job of finding me," said Bridges. I was confident and shot the ball, so you know, credit to them, they were the ones who found me in the first quarter and got me going.

Indiana center Myles Turner, who leads the league in blocked shots, added four to his total to go along with 15 points and 10 rebounds. Malcolm Brogdon had 22 points and nine assists for the Pacers. Justin Holiday had 17 points and Victor Oladipo finished with 16.

Besides Bridges, Devin Booker had a big night for the 7-3 Suns with 25 points.

The Pacers are 6-3 and begin their western trip on Monday at Sacramento.