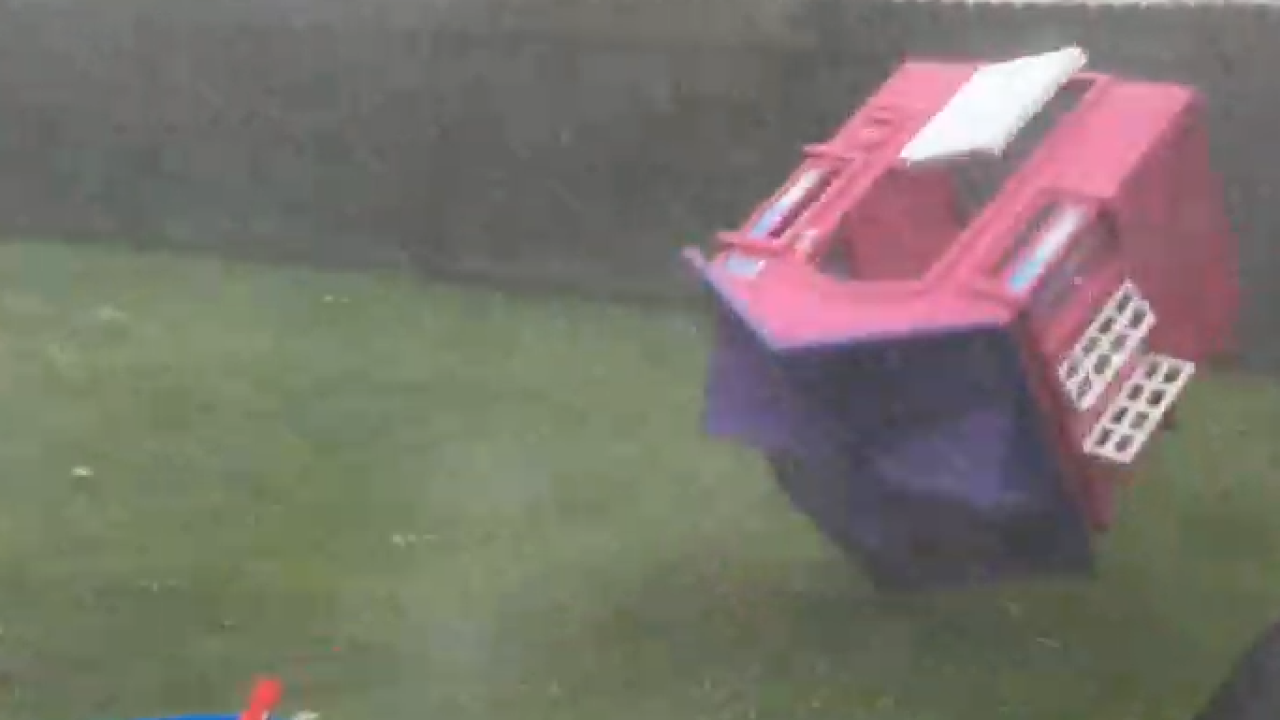 Winds blow a playhouse across a Hendricks County yard Monday.

INDIANAPOLIS — Strong winds that blew across the region Monday afternoon left thousands of homes and businesses without power and some damage.

At 8:30 p.m. IPL and Duke Energy repair teams are getting a handle on restoring power. In all, about 13,000 customers are still in the dark.

At 6:10 p.m. The number of power outages is on the decrease, but crews still have a lot of work ahead of them. Indianapolis Power and Light reports more than 18,000 outages, while Duke Energy has about 13,000.

At 5:30 p.m. Power was out to more than 38,000 customers of Duke Energy and Indianapolis Power and Light. Most of the Duke outages were south and east of Indianapolis. Within the city, IPL outages were reported across Indianapolis, generally moving in a line from the west and southwest to the northeast.

Around the region, downed trees and tree limbs were blocking roads.

At 5:15 p.m. Authorities in Brownsburg reported a structure collapse that left four people injured, one critically. The collapse happened at the construction site of a commercial building at Northfield Drive and State Road 267 in Brownsburg, near Interstate-74.

At 5:05 p.m. Tree limbs were reported down in a number of places, including Shelby County, where traffic on Busy State Road 9 was blocked in both directions at County Road 350 north by fallen limbs.

At 4:55 p.m. A dramatic increase in the number of power outages. Duke Energy now reporting close to 19,000 customers without power and IPL reporting about 11,000.

At 4:30 p.m. Power outages continued to increase, with more than 22,000 customers of IPL and Duke Energy without power.

More than 2,000 outages were in the Terre Haute area, with the rest northwest and southwest of Indianapolis.

IPL outages followed a path from the west side of Indianapolis to the northeast side.

Wind gusts of up to 60 miles-per-hour were reported.

Here's a look at the severe weather from WRTV Meteorologist Kevin Gregory.