INDIANAPOLIS -- Have you ever seen a "super blue blood moon?"  You'll get the chance to catch a glimpse of one soon.

On January 31, we'll experience our second full moon of the month.  Anytime we get two full moons in one month, the second one is considered a blue moon.

When you look up, you won't notice a blue color to the moon.  Actually, the moon will have a reddish tint to it. That's the second special thing about our moon on the 31.  We will experience a total lunar eclipse. This happens as the moon is in the earth's shadow.  The red coloring is why the moon also gets the nickname of the "blood moon."

At the same time, the moon will be relatively close to earth and appear about 14 percent brighter, AKA a "supermoon." Put all of that together and we get the "super blue blood moon!"

Clouds willing, Gordon Johnston, program executive and lunar blogger at NASA, says our best time for viewing the lunar event on January 31st is about 6:45 a.m. He says to get to a high place and make sure you have a clear line of sight to the horizon in the west-northwest.  Because of the timing, viewing the spectacle in the sky will be a little more challenging in our part of the country.  Johnston says, "The eclipse begins at 5:51 a.m., as the moon is about to set in the western sky, and the sky is getting lighter in the east."

If you miss out on the lunar eclipse, or clouds block your view, you'll have to wait until January of 2019 for the next one. 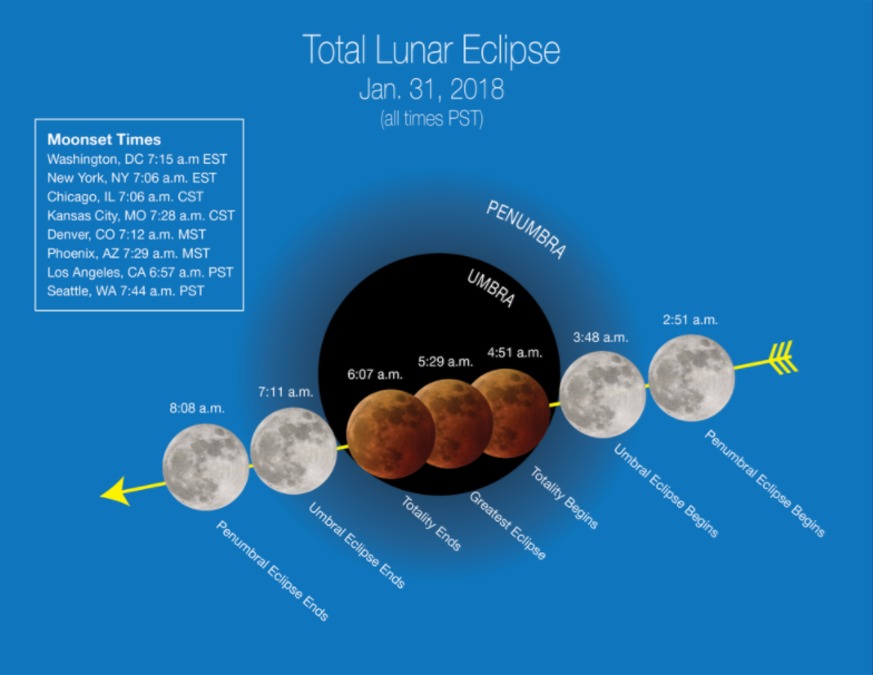 The rare combo of lunar events hasn’t been seen in more than 150 years, according to earthsky.org. Astronomers have to go all the way back to March 31, 1866, to find the last “Blue Blood Moon.”