INDIANAPOLIS - Friday's winter storm has had its way with central Indiana, leaving ice, sleet, slush and snow in its wake.

Snow is making its way out of the Indy metro area. The major impact will be on side roads that weren't able to be pre-treated this morning and haven't been cleared. The afternoon snowfall has concealed the sheets of ice covering those roads making them more dangerous for unsuspecting drivers. While there's no new snow expected to fall, wind could still blow snow around enough to cause issues.

Travel advisories have been issued for almost all of central Indiana, several counties are also under a travel watch meaning the road conditions are dangerous and "threatening to the safety" of the public.

AMOUNTS
Keep in mind as the temperatures fall, any ice we do get won’t be going away. So as the snow falls it will cover the ice and you won’t be able to see it. As for the snow totals, less than 1" is expected NW of a Terre Haute to Peru line, 1”-3” is possible across much of central Indiana, with 3 to possibly 5" of snow SE of a Bloomington to New Castle line. 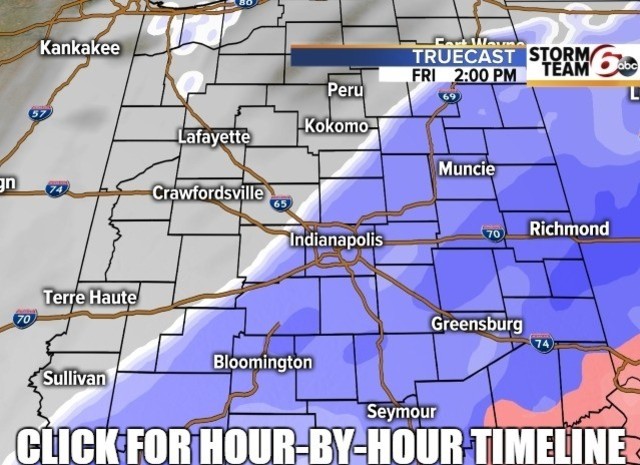 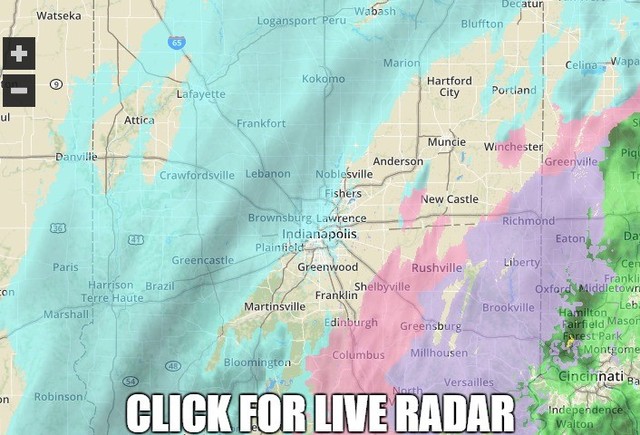 WHAT'S NEXT
Now we deal with another arctic blast and very windy conditions. Blowing and drifting snow will be a big issue for us Saturday with highs only right around 20 degrees. Wind gusts could be in the 40 mph range. If there is still any ice on the trees Saturday, we could run into problems when the wind kicks up. That is when branches could fall.

More snow is on the way for Monday as a quick clipper moves through the area.  Several inches will be possible with highs only in the teens behind the reinforcing shot of cold air.

Winter Weather Advisory issued for Indianapolis and areas in purple, Winter Storm Warning for areas in white. Both are in effect 1AM to 10PM Friday. @rtv6 pic.twitter.com/mP4T3FzgTG