INDIANAPOLIS -- With North Korea's latest missile test, the threat of an attack is becoming more real for some people. It is the first time Americans, and people in Indianapolis, have worried about such an attack in decades.

Since North Korea's tests, Indiana hasn't instituted any new protocols. But Hawaii, which is about 4,000 miles closer to North Korea than Indiana, is testing its nuclear sirens for the first time since the Cold War.

The height of people's fear of a nuclear attack was from the 1950s through the 1980s, during the Cold War. In the '50s, the United States began an arms race with the Soviet Union, as the U.S. Secretary of State announced a policy called "massive retaliation," meaning the country would respond to a nuclear attack with even greater force than the initiator.

People in Indianapolis had two options if a nuclear attack occurred: leave or bunker down.

The Marion County Civil Defense Office advertised evacuation plans, giving people a route to go in case of a deadly attack. Most of them included getting as far away from the downtown area as possible, as officials believed any nuclear attacks would target populated cities first. 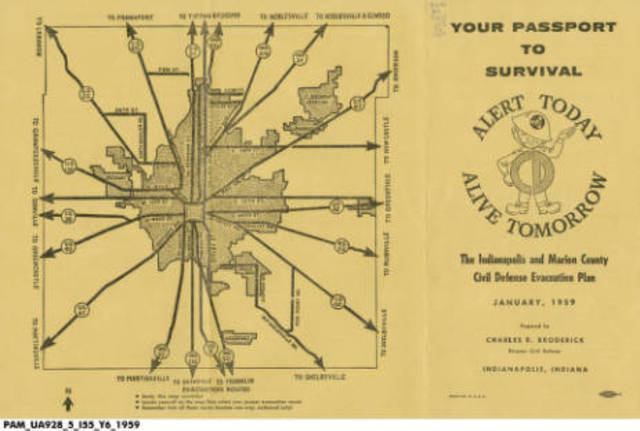 If people chose or were not able to leave, there were more than 100 buildings in the county designated by the Civil Defense Office and the Red Cross as treatment centers, but just 19 of them were categorized as fallout shelters.

The shelters would be filled with canned foods like bacon, fish and peanut butter, and packaged foods like corn meal, processed cheese and dessert powder.

"We have a tremendous job with a limited amount of resources," Marion County Civil Defense Director Charles R. Broderick said in a 1962 Indianapolis Star article. "But we feel that with the help of various divisions of government we will be able to stockpile the buildings and train their personnel."

If you were one of the unlucky few who didn't evacuate or make it into a shelter, the Civil Defense Office offered the following tips for people in case of an attack:

The fallout shelters of the 1950s have long since been abandoned and turned into regular offices, schools or churches. But some buildings have that ominous fallout shelter sign on their sides to this day.

Check out the map below to see if there were -- or are -- any treatment centers or fallout shelters near you. You may need to know someday. (Map from 1954)