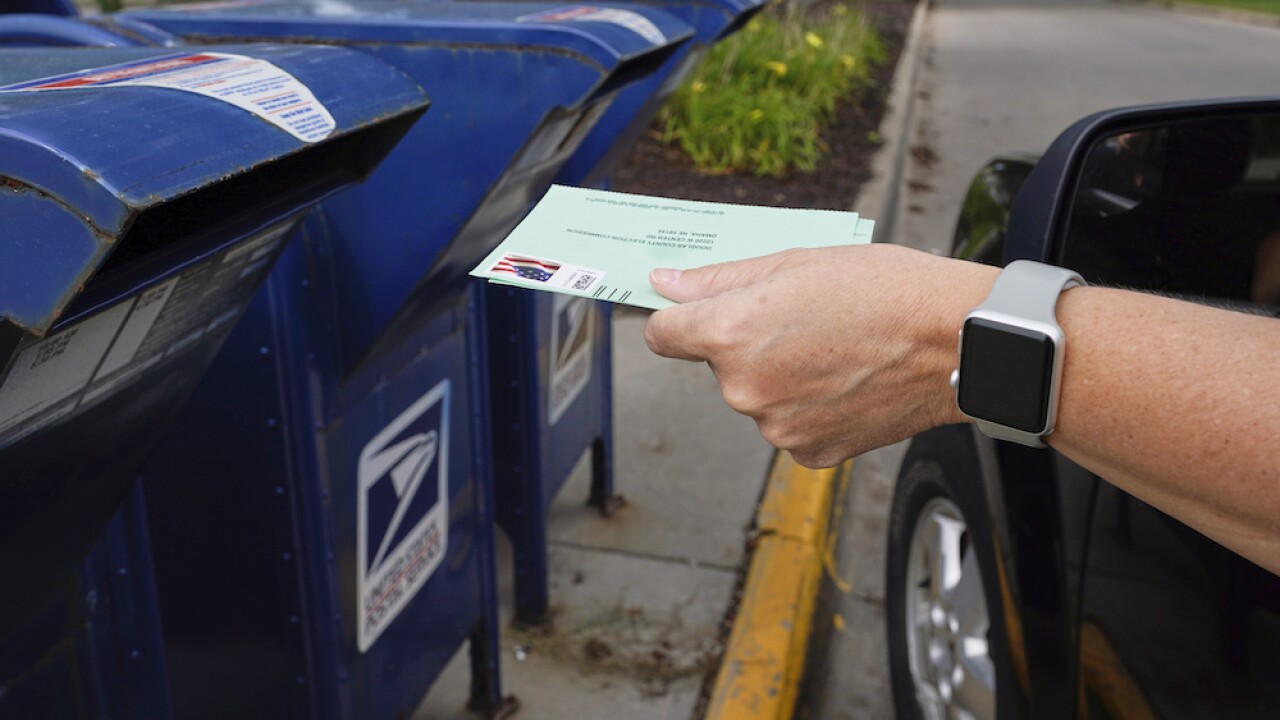 Copyright 2020 The Associated Press. All rights reserved
Nati Harnik/AP
A person drops into a mail box applications for mail-in ballots, in Omaha, Neb., Tuesday, Aug. 18, 2020. The Postmaster general announced Tuesday he is halting some operational changes to mail delivery that critics warned were causing widespread delays and could disrupt voting in the November election. Postmaster General Louis DeJoy said he would "suspend" his initiatives until after the election "to avoid even the appearance of impact on election mail." (AP Photo/Nati Harnik)

INDIANAPOLIS — The Indiana State Conference of the NAACP and Chicago Lawyers’ Committee for Civil Rights are demanding the Indiana Secretary of State’s office correct and clarify “misinformation” distributed to voters in an October 9 letter.

The NAACP says the state’s letter wrongly instructed voters who received a mail-in ballot to contact the Secretary of State’s Office to verify their application.

“Nowhere in our State Statutes does it require a voter to contact the Secretary of State’s Office as a prerequisite for a voter’s ballot to be counted,” stated Attorney Barbara Bolling-Williams, Indiana State President of the NAACP.

Bolling-Williams told WRTV on Monday she’s aware of voters in both Delaware and Monroe County that received letters from the Secretary of State.

The letter incorrectly instructs voters who received an unwanted absentee ballot to “rip your absentee ballot in half and take it to your polling location” if they wish to vote in person,” according to the NAACP.

The letter wrongly tells voters they will then have to sign an ABS-5 form, which requires the voter to file with the county election board rather than with their local polling place inspector.

“They need only to surrender their mail-absentee ballot to an inspector at an in-person absentee voting location before or on Election Day and vote without filling out an ABS-5 form,” said Bolling-Williams.

“There is already too much misinformation being disseminated without the Secretary of State adding to the confusion,” said Bolling-Williams.

Bolling-Williams said the NAACP is concerned it will intimidate black voters into not voting.

“We can’t let tactics intimidate us, to stop us from voting at the 11th hour, or intimidate us from casting our ballot,” said Bolling-Williams. “That has been the history in this country is using intimidation tactics and misinformation.”

Bolling-Williams said the Indiana Secretary of State’s office has not responded to the NAACP’s letter asking the office to clarify their October 9 letter to voters.

WRTV Investigates reached out to Connie Lawson’s office for comment, and a spokesperson told WRTV they have not responded to the NAACP's request.

WRTV Investigates reported on Friday that voters are receiving conflicting information regarding whether they can change their mind and vote early in person if they already have an absentee ballot.

“In an election that has too many new rules and changes because of COVID-19, it's normal for voters to be confused”, said Ami Gandhi, an attorney with Chicago Lawyers’ Committee.” That makes it all the more important that voters be able to ask questions without fear of voter intimidation.”

Voters who experience problems or have questions can call the non-partisan Election Protection hotline at 866-OUR-VOTE (866-687-8683) to get immediate assistance.