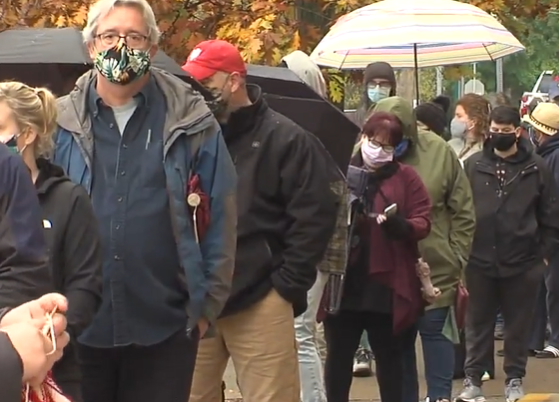 A lot of voters are confused by voting regulations and are wondering why things need to be so confusing. 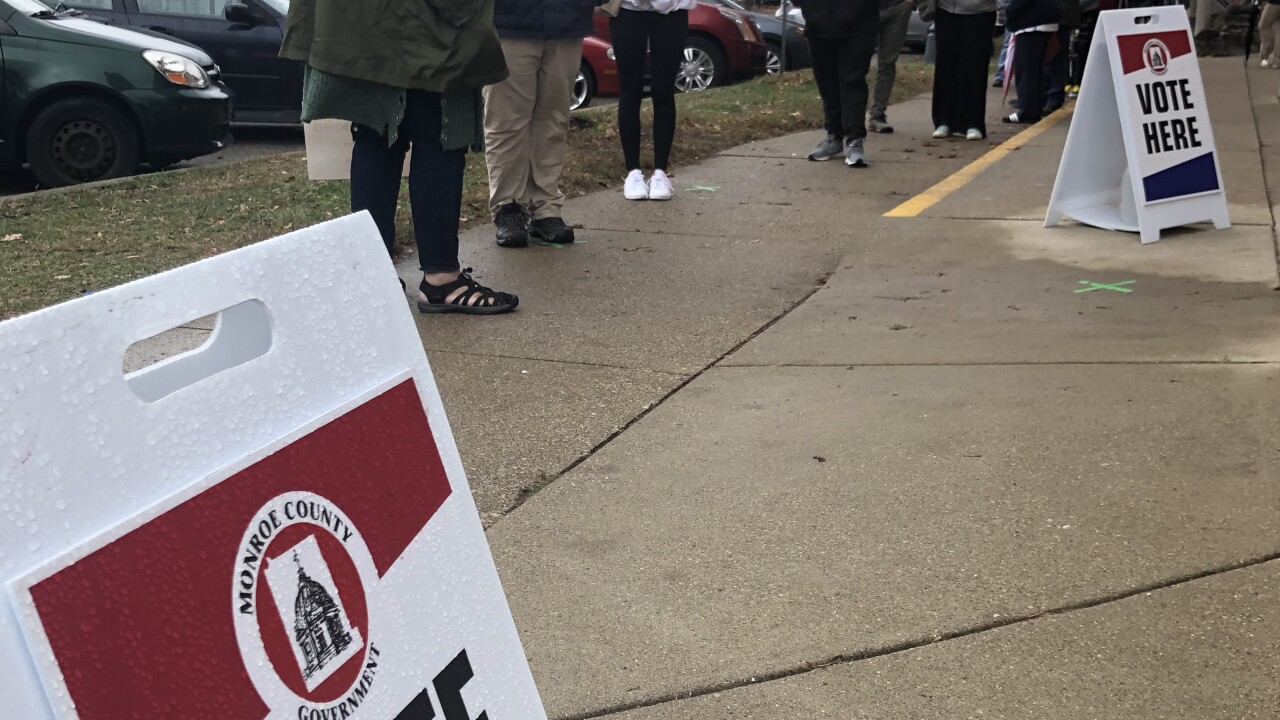 BLOOMINGTON — Voters and poll workers across central Indiana are getting conflicting information about whether you can change your mind about how to cast your ballot, WRTV Investigates has learned.

The confusion primarily impacts voters who originally planned to vote absentee by mail but changed their mind to voting early in-person for various reasons including concern about whether their absentee vote will be counted in time for Election Day.

Charlotte Hess, of Bloomington, applied for an absentee ballot because she’s 65 and was unsure what would be happening with COVID-19.

"I saw my request for an absentee ballot as a kind of insurance that I would be able to vote in one way or another,” Hess said.

Hess said she is concerned about lag times involving mail-in ballots, so she decided to vote early in-person instead.

However, when she called the Monroe County election office, she was told she couldn’t change her mind.

"They said you must vote by mail or deposit your absentee ballot," Hess said. “I want to say it’s worrisome and a little frightening.”

Kathy Radford, of Carmel, said the same thing happened to her family friend, who is a junior at Indiana University in Bloomington.

She said Monroe County turned the student away when she tried to surrender her absentee ballot and vote early in person.

"I personally think it's suppression and oppression," Radford said. "She simply wanted to make sure her vote was going to count, and she doesn't trust the system anymore. She really is concerned her absentee wouldn't count and she has the right to change her mind."

"We strongly believe that we need to reduce every possible barrier to casting a ballot,” Tracey Hutchings-Goetz, communications director for Hoosier Action, said. “This has been allowed in years past, but the rules seem to be shifting and changing and that seems to be contributing to confusion and barriers to voting.”

"You should be able to hand your ballot over to the polling place inspector at the early voting location, tell them you have changed your mind and they will take that ballot from you and allow you to vote in person.” Julia Vaughn, policy director at Common Cause Indiana, said. “You don't need to make voters jump through multiple hoops to exercise their constitutional right to vote."

The Indiana Election Division and the Indiana Secretary of State’s Office interpret the statute differently.

They say the voter can only change their mind to voting in-person if their original absentee ballot by mail is lost, spoiled or defective.

“Defective could mean the ballot is missing the two sets of initials or the county made an error in the ballot style sent to the voter, for example,” Angie Nussmeyer, IED co-director said in an email to WRTV. “Lost would mean it didn’t arrive by mail or maybe the voter misplaced. Because there are a number of things that can go awry with absentee voting, state law allows for troubleshooting scenarios like these.”

The voter would have to fill out an ABS5 affidavit to the county election board in order to get a replacement ballot, according to the Indiana Election Division.

“The replacement absentee ballot can be sent by mail or delivered by other absentee methods like in-person absentee voting or travel board, if the voter is eligible for travel board that is,” Nussmeyer said. “Essentially the voter is asking to exchange one absentee for another because there is an issue with the first one.”

Some counties are following the state’s advice and are not allowing voters to change their mind from absentee by mail to voting early in-person.

"We know it's happening in Lake and Monroe, but I'm sure it's happening in other counties as well,” Vaughn said. “It's causing a lot of problems. We need to have uniform election laws across our state. It shouldn’t matter which county you live in."

Common Cause Indiana sent a letter to the Indiana Election Commission and the Secretary of State blasting the agencies for providing “inaccurate and inconsistent” information to voters and asking for “corrective action to ensure all eligible voters are able to vote in person at the time of their choosing."

Common Cause points to Section 3-11.5-4-18 of the Indiana Election Code, which states, unequivocally, “If a voter has not returned an absentee ballot, the voter may vote in person.”

The statute does not restrict an absentee voter from voting earlier than Election Day through in-person absentee voting, according to the letter.

No one has responded to the letter, Vaughn said.

WRTV Investigates requested on-camera interviews with Monroe County, the Secretary of State and the Indiana Election Division, but so far no one has agreed to an interview.

In emails to WRTV, the state points out on Election Day, voters can surrender their absentee ballots and vote in person.

“The voter will need to surrender their absentee ballot to the inspector and the inspector must mark the ballot ‘canceled’ and preserve it with the rejected ballots,” Valerie Warycha, spokeswoman for the Indiana Secretary of State, said. “If the voter has not received their absentee-by-mail ballot by Election Day, the voter has to complete the PRE-5 and then can vote a regular ballot, if otherwise qualified.”

So, what can you do if you’re concerned about your absentee vote counting? Hoosier Action recommends filling out and hand-delivering your absentee ballot as soon as possible, although some counties only let you do this at the courthouse.

You can also surrender your ballot and vote on Election Day — just make sure to bring your ballot with you.

If you have problems:

"It is completely unacceptable to me that there would be confusion that would curtail or disenfranchise voters,” Hutchings-Goetz said.

Hoosier Action is helping voters like Hess navigate through this voting confusion.

Hess plans to hand-deliver her mail-in ballot and hopes it will be counted.

"Voting should be an easy process not a confusing, difficult one,” Hess said.

Radford’s friend plans to vote on Election Day, since she can’t vote early in person in Monroe County.

“It’s very inconsistent and it has to be fixed,” Radford said.

Voters and groups like Common Cause say state lawmakers need to clarify state law on whether voters can change their mind on how they want to cast their ballots.

“I think the legislature should point out this is what the statute means unequivocally so we don’t have this confusion created for future elections,” Julia Vaughn said.

“A voter cannot change their mind after they have a ballot sent to them. Once they have that ballot, they can vote it, drop it in the mail (postage paid) OR hand-deliver it to Election Central. We have a door that is designated for ballot drop-offs so there isn’t any or much of a line to do that. A voter gets the opportunity to make their choice but then needs to stay with that choice. There is some misinformation out there in regards to different ballots depending on how a voter votes. That is NOT true. In general, a voter can request a mailed ballot or vote early voting. Both of these methods are absentee because they are absent from Election Day. Another choice is for the voter to vote on Election Day. All three methods have the EXACT same ballot.”

FULL RESPONSE FROM INDIANA SECRETARY OF STATE TO WRTV

“If you have a voter who changed their mind and now wants to vote in person, they may request a replacement absentee ballot and vote in-person if their original absentee ballot by mail is lost, spoiled or defective (IC 3-11-4-17.7). The voter will need to fill out an ABS-5, and the county can reissue the ballot by mail or during in-person absentee voting now that it has begun. State law does not require the original absentee ballot to be returned to the CEB if the ABS-5 process is followed; instead, the voter should destroy the original ballot if they have not done so already.

If the voter has not received their absentee-by-mail ballot by Election Day, the voter has to complete the PRE-5 and then can vote a regular ballot, if otherwise qualified.”

A voter who has an absentee ballot that is lost spoiled or defective can have it replaced after returning an ABS5 affidavit to the county election board. The replacement absentee ballot can be sent by mail or delivered by other absentee methods like in-person absentee voting or travel board, if the voter is eligible for travel board that is. Essentially the voter is asking to exchange one absentee for another because there is an issue with the first one.

Defective could mean the ballot is missing the two sets of initials or the county made an error in the ballot style sent to the voter, for example. Spoiled could mean the voter draws a line on the ballot, or bubbles in the wrong candidate, or tears their ballot or mistakenly throws it away, for example. Lost would mean it didn’t arrive by mail or maybe the voter misplaced. Because there are a number of things that can go awry with absentee voting, state law allows for troubleshooting scenarios like these. In any event, the voter does not need to bring their absentee ballot with them to use the ABS5 before Election Day to attest their original ballot was lost, spoiled or defective. The voter would destroy their original ballot.

On Election Day, a voter who is marked as requesting an absentee ballot in the poll list MUST bring their absentee ballot with them to surrender it and vote in person. The voter gives the ballot to the Inspector (a poll worker) who cancels it, removes the absentee flag, and issued a regular ballot if the voter is otherwise qualified.

If a voter did not receive their absentee ballot then on Election Day, the voter completes the PRE5 affidavit at the polling site so that the poll workers can remove the absentee flag from the poll list and issue a regular ballot, if the voter is otherwise qualified.”